The latest and newest BMW Z4 2019 is now in the Philippines!

Jun 28, 2019 | Same topic: Auto Industry: Latest Updates
The new sixth-generation BMW Z4 has reached the Philippines and apart from looking good, it's looking like it will handle better than the previous version!

Recently, the official distributor of BMW here in the Philippines, SMC Asia Car Distributors Corp announced that the latest iteration of the BMW Z4 is now available here in the country.

With this new, updated version of the Z4, BMW Philippines continues to provide the Filipino driving enthusiasts another option with their premium, sports convertible designed to thrill and excite.

What one immediately notices, especially for those familiar with the BMW Z4 is that the new, sixth-generation Z4 got rid of the lightweight aluminum shell it had for the previous fifth E89 generation and instead now sports a retractable soft top. Sleeker and faster than ever before, the Z4 has a better power to weight ration than its predecessors!

Now in consideration to performance, the lighter soft top can be assumed to make overall weight even lighter thus giving a more favorable power to weight ratio.

There are however consequences to having a soft top in driving in real-world situations but as of now, we’ll just have to wait and see as to how the Z4’s soft top will perform in day to day drives and in different kinds of weather.

The new BMW Z4 now has a more prominent rear end which looks wider and more aggressive than the previous generation. The new Z4 has a ducktail spoiler also enhances this along with two interesting parallelogram-shaped exhaust tips.

Towards the sides, one may notice that this new sixth gen Z4’s bodyline in now straighter than the curvier fifth gen further enhancing its aggressively sporty persona. In addition, there are now several stylishly angular air vents just behind the Z4’s wheel wells and on the front, all of which are fully functional. The front of the new Z4 is also redesigned and is currently look very different. The grille still retains that distinctive BMW shape but now has this honeycomb pattern to it. A far departure from the simpler horizontally aligned slats most BMWs have.

The LED headlights now have a different shape and are much more vertically aligned than the fifth gen’s more sideways pair. Inside, the new Z4’s overall interior is a sleek and comfortable space filled with angular lines. What prominently stands out is the brightly colored, Vernasca clad bucket seats which the M Sport package and the BMW M Performance model of the Z4 come with.

There’s also the huge center console which is surrounded by an interesting pattern. The aforementioned center console also gives the driver a snug, the cockpit feels thus further pushing the driver-focused design of the new Z4’s interior. 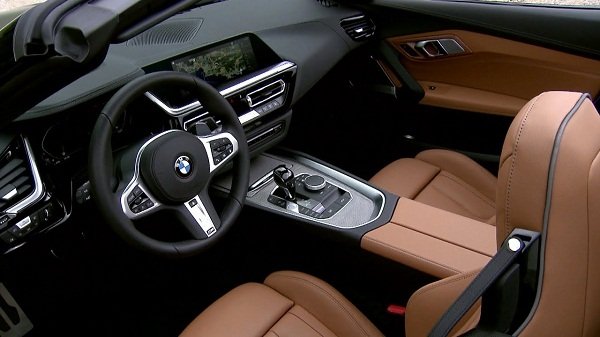 Ride in luxury while tearing up mountain roads!

In comparison to the previous generations of BMW Z4, the new Z4 is much more compact, has a lower overall weight, and has an even lower center of gravity.

Couple that with its 50:50 weight distribution and a very strong and stable chassis with excellent aerodynamics, the new Z4 indeed has the potential to superb handling. Power is then sent to the rear wheels by an 8-speed automatic transmission with Steptronic. Unfortunately, a manual version is not available with the new Z4.

According to sources, the BMW Z4 will come in two variants, with the pricing as below:

In knowing that the Z4 shares a lot of its DNA with the new Toyota Supra, it can be assumed that the latest version of the Toyota sports coupe will also make its debut here in the Philippines yeah?