Apr 04, 2019 | Same topic: Most Updated Car Concept
The BMW Z4 2019 for the ASEAN market has been revealed at the 4th Bangkok International Motor Show!

As the new BMW based Toyota Supra was introduced at the 40th Bangkok International Motor Show, BMW itself also reveals the third generation and the latest iteration of the BMW Z4 2019 coupe for the ASEAN.

Sharing a platform with the new Toyota Supra, the Z4 is a very recognizable BMW roadster/coupe as it has starred as a Bond car in the 90s and has a considerable following the world over and thus many are excited to know that the new Z4 has finally reached the region.

Upon taking a look at the new BMW Z4, one may notice that the Coupe is still very much a BMW. From the front, one can glean the typical BMW twin grilles which are quite sizable.

Like its predecessors and other roadsters out there, the Z4’s hood is quite long; nearly a third of its entire length. Opposite of that is its very short tail which surprisingly doesn’t actually compromise on boot space even with the space in the middle of the car where the retractable soft top roof is stored. 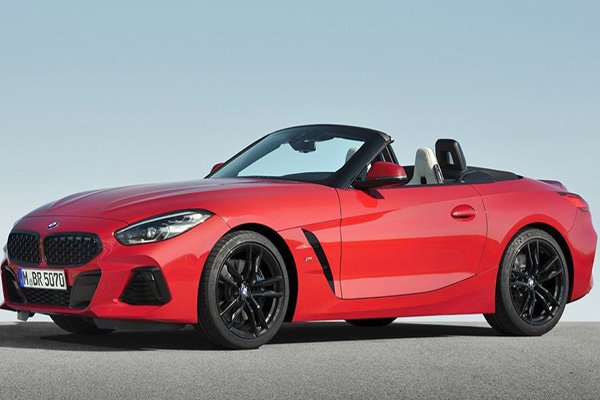 What comes different from older versions though, looks wise are numerous. For starters, the traditional twin grille that we’ve talked about earlier now comes with a mesh design instead of the vertically aligned slits that come familiar with the older versions.

Next, the BMW Z4 2019 now comes with a number of very angular air vents which can be seen on either side of the front bumper which previously had gentler angles. Vents can now also be found after each wheel presumably for brake cooling purposes.

Another big change for this new Z4 is that a hardtop will no longer be available. What BMW did instead was to use the classic soft top which is similar to that found in the earlier E84 Z4 which is the first generation.

As mentioned earlier, the soft top folds down like origami to a compartment behind the driver at the center of the car which does not affect the size of the boot which is about 281 liters is larger than other similar vehicles out there. It is even larger than the previous Z4’s.

Inside the BMW Z4 2019, one will immediately notice that the instrument panel is slightly angled towards the driver and the digital gauge cluster which we assume to be somewhat customizable.

Other features include wireless charging and Apple Carplay. Inside the cabin, storage for your possessions is somewhat lacking as only one storage bin can be found behind the seats and two cup holders in-between the driver and passenger seats. Those digital displays so futuristic and yet it is here now!

According to the latest car news, the Z4, for the Thailand market at least, comes available in two variants; the Z4 M40i and the Z4 sDrive30i.

The first one, the M40i is the more powerful choice as it is powered by a three-liter inline-six which is also turbocharged and is rated at 335 horsepower and 500 nm of torque. The other variant is a two liter and also has forced induction. As for the Z4’s transmission, an 8-speed automatic is the only one available. Now as with numerous vehicles released in Thailand, many eventually are also released here in the Philippines. Some however don’t. We here at Philkotse.com however really hope to see the BMW Z4 2019 on Philippine shores in the near future.