It is designed to offer next-level off-road performance.

Since the all-new Ford Ranger already made its global debut late last year, the Raptor version will have to follow eventually. Fans no longer have to wait as Ford Motor Company officially revealed the all-new Ranger Raptor, coming with smarter tech, a more rigid structure, and a new V6 engine. The next-gen Ford Ranger Raptor, developed by Ford Performance, is built to ‘dominate desert dunes, tackle mountains, and excel in all situations.’ Perhaps the biggest change is found under the hood which we will get into in a second. Markets such as Europe will start taking deliveries of the new pickup truck in the last quarter of this year.

Exterior-wise, the all-new Ford Ranger adopts a similar front fascia as the regular Ranger. It gets an identical grille, C-clamp daytime running lights (DRLs), and a silver skid plate. And just like the outgoing Ranger Raptor, the grille features a blacked-out FORD lettering instead of the Blue Oval company’s logo. Built for the off-roads

17-inch alloy wheels with all-terrain tires come exclusive to the Ranger, providing a rugged off-road appeal to the truck. At the rear, the vehicle sports LED taillights and a twin-exhaust setup. The Precision Gray rear bumper features an integrated running board and a tow hitch to ‘avoid compromising the angle of attack.’

The high-performance appeal of the next-gen pickup truck’s exterior has been integrated into the cabin as well. To do just that, sports seats are installed for the front and rear, said to be inspired by jet fighters. These seats provide comfort and support even during high-speed cornering. Sporty-looking details are added to the cabin

Separating the Raptor version from the regular Raptor are the Code Orange accents which can be found on the dashboard, stitching, and seats. Features such as a heated sport steering wheel and cast magnesium paddle shifters complete the intended sporty driving experience of the second-generation model.

Moving on to the tech, the center console hosts a 12-inch touchscreen, offering Ford’s next-gen SYNC 4A, Apple CarPlay, and Android Auto wireless compatibility at no extra cost. This is paired to a 10-speaker B&O audio system which is said to ‘deliver the right soundtrack for every new adventure.’ 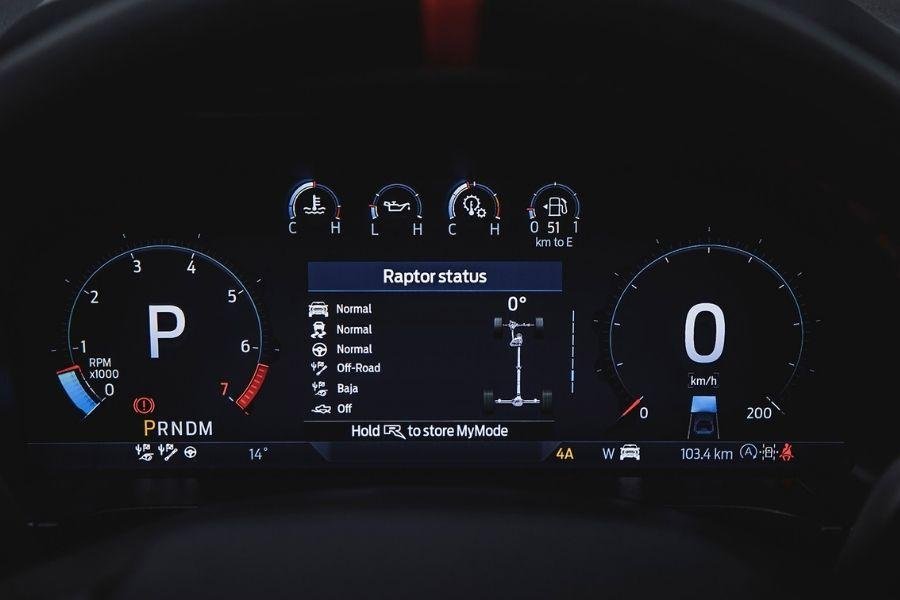 No detailed list of safety bits was given by Ford Motor Company. As mentioned earlier, the specifications may differ per market, including safety features. Looking at the regular Ranger, the Raptor version could come with the FordPass which allows passengers to connect with their truck using a smartphone.

Powering the all-new Ford Ranger Raptor is a 3.0-liter twin-turbocharged EcoBoost V6 gasoline engine that is capable of generating 288 horsepower and 491 Nm of torque. The engine is designed with a compacted cast iron cylinder block, which is approximately 75-percent stronger than the iron used in traditional castings.

The said performance numbers are applicable only to the Euro-spec Ranger Raptor. In other markets like Australia and South Africa, the same V6 engine churns out 392 horsepower and 583 Nm of torque. Ford said that the European car market has strict emission standards, resulting in a market-specific tune that lowered the power outputs. As a genuine off-roader, the pickup truck comes with various selectable drive modes both for off-roads and on-roads. A Trail Control feature is installed which is a kind of cruise control intended for off-roading. Additionally, the model continues to sport FOX shock absorbers.

Meanwhile, the American automaker stated that the current 2.0-liter bi-turbo diesel engine will still be available in specific markets starting in 2023. As such, the ASEAN version could still get a different engine from the current release. More details will be announced once the next-gen Ford Ranger Raptor nears our market launch.

Don’t the latest updates on the next-gen Ranger Raptor at Philkotse.com.