Updated Dec 11, 2020
Editor's rating 5.0
User's rating 5.0
Promising fun and heightened performance straight from the showroom, we take a closer look at the Ford Ranger Raptor 2019 and why it has become one of the hottest-selling pickup trucks in the country.

When Ford first announced that the Ranger would be getting a Raptor variant, many thought this was fake news. After all, Filipinos have been familiar with Raptor badge largely because it’s been attributed to the worst model of the iconic Ford F-150. The Ranger Raptor is one good-looking monster

We, at Philkotse.com, already had reviewed the Australian-spec Ford Raptor 2019 review to predict what to expect in the upcoming 2019 Ford Ranger Raptor Philippines.

Then the leaks came out. Yes, the Ford Raptor 2019 was real - and it was coming to the Philippines wearing the venerable badge previously seen exclusively on the F-150. The imposing presence says it all

The current T6-designation Ranger has been a pioneer in the world of modern mid-size pickup trucks. Prior to this Ranger, these cars were looked upon as useful but otherwise bland beasts of burden. What advantage does a pickup truck have over, say, an SUV?

Sure, it can haul five people, have basic amenities such as air-conditioning - but that was it. The Ranger proved that you can help your dad out with the family business by hauling stuff and still be cool in school. This is definitely not a Wildtrak

Check out the in-depth review from Philkotse.com to learn more about the high-performance pickup truck.

The Ford Raptor Philippines 2019 ups the ante and turns the dial up to 11 in the cool department. The Raptor badge has always been synonymous with power, machismo, and flair. The exterior bits of the Ford Ranger Raptor evoke this spirit. Up front, you'll be greeted by a huge Ford grille, reminiscent of the F-150 Raptor.

Ever wondered where all these aftermarket grilles that Ford equips their Ranger variants and even the Ecosport come from? The Raptor started it all. Daylight Running Lights are located at the bottom of the horizontal headlights, adding more to the truck's menacingly good looks.

Completing the fascia is a 3/16 inch-thick powder-coated aluminum plate to protect the transmission and transfer case of the vehicle. Off-roaders know how important this part is. Wide fender flares adorn the side panels of the pickup extending the track by 150mm. These changes are not just cosmetic in nature but are needed to accommodate the huge BF Goodrich All-terrain tires, linked to the snazzy Fox Racing Suspension array which raises ground clearance by 50mm compared to the Wildtrak variant. Finally, you can have the hardware to back up your Fox decals.

>>> Related: 2021 Ford Ranger Raptor: Expectations and what we know so far A large bed is ready for some rough and tumble action

Speaking of decals, the 2019 Ford Ranger Raptor exterior sure does appear to have this fear you’d mistake it for something else, much less its lesser-endowed variants. You can find Raptor badges all around the truck, from the rear tailgate, the rear fender arches, and even that rugged and tank-like step-board.

This is a man’s truck in every way. Then again the Raptor line for Ford pickups has always been known for its flamboyant, sporty aspirations. It has never been subtle or was it meant to be, so in that context, those stickers and badges are appropriate for this vehicle. Step on the most rugged, almost granite-like, step-board

>>> Widen your search with our cars for sale section from all brands by reliable sellers.

About 2019 Ford Ranger Raptor interior, apart from more Raptor badges, you will be greeted by what may be the best cabin in the pickup game. Soft plastics and leather are spread across the dashboard especially in and around major contact points for both the driver and the passengers.

The seats are bolstered on the edges to make sure that you stay in place just in case you get to use the Raptor for its intended purpose - and that’s all out off-roading. Still, you won’t be using the Ranger Raptor for that purpose most of the time anyway.

So you get to enjoy and experience other accouterments such as Ford’s Sync 3 system, charging points, and a 230-volt socket to boot. Safety also does not take a back seat as the Ford Ranger Raptor features six airbags. Other usual stuff like cruise control, lane departure assist, ABS, and traction control serve to sweeten the deal for already happy customers. The dashboard looks a bit like the Ford Explorer

We’ve so far discussed the way the Ranger Raptor looks. What’s it like to drive it? In a few words, the vehicle is surprisingly refined. Being the performance model for the Ranger line with its macho looks and Fox Racing Shocks, one cannot be blamed to think that they were in for a jarring ride ahead especially on pothole-ridden roads of the Philippines. This was not at all the case as the truck took it all like a champ.

Steering is electronically controlled so it over-boosts itself during parking maneuvers to ease the effort and then stiffens up as soon as you hit speed -- and you will hit that speed! Powering the 2019 Ford Ranger Raptor Philippines is a two-liter, bi-turbo diesel engine with delivering 213hp at 3,750rpm and a whopping 500Nm of torque at a very early 1,750rpm. The output is accessed via an all-new 10-speed automatic transmission. Gear shifts can be both relaxed for those chill-out moments, and immediate for difficult overtaking maneuvers.

Decent fuel economy is also an ace the Ranger Raptor holds. You see with the total weight of the vehicle, one would expect fuel economy to take a huge hit. Thankfully, through the magic of an ideal power-to-weight ratio and the 10-speed auto transmission, the 2019 Ford Raptor specs were able to maintain power delivery within its prescribed power band.

How do 10 km/l in the city and 15 km/l on the highway sound to you? I say that those numbers actually rival much smaller cars. Of course, if you start driving like a maniac, and spool those bi-turbo units, your fuel economy would take a huge hit. 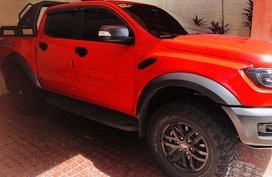 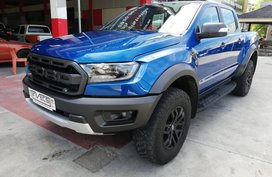 The Ford Ranger Raptor sets itself apart from a slew of competitors. Whereas others would simply slap on their models go-fast bits, Ford went far and beyond our imagination and actually made a performance model. The Ford Ranger Raptor 2019 stands out among its sibling Rangers

The current Ford Ranger Raptor 2019 price is going for P1,998,000, it’s a huge bargain for all the goodies you’ll get. And as buyers’ reactions and sales performance have shown, Filipinos know how to appreciate a good product when they see one.

I’ve spoken to one of our friends who works as a sales representative for a Ford dealership in the Philippines and he revealed that they sell-out all their monthly Ranger Raptor allocations in just a few days as soon as it gets delivered to their showroom - averaging about 15 to 17 Raptors per month. That is no easy feat. 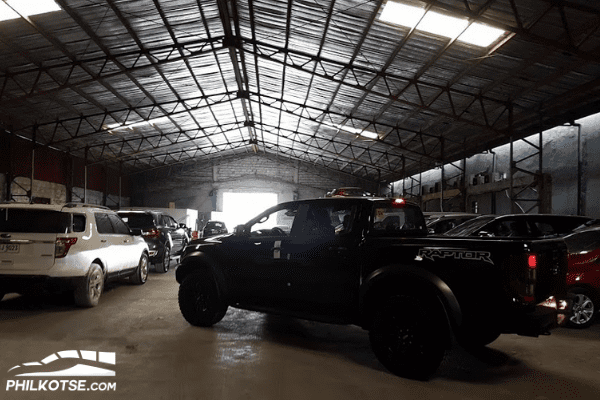 The pickup market is chock-full of contenders - from the Chevy Colorado, Mitsubishi Strada, Isuzu DMAX, and the Toyota Hilux Conquest - all of which undercuts the Ford Ranger Raptor cost.

But at the end of the day, none of these can ever match the Raptor when it comes to out-of-the-box fun and performance. For the money, nothing can beat the Ranger Raptor in my book.

>>> View full price list of Ford in the Philippines