Kia to launch Seltos on November 6 and pricing released

Updated Nov 27, 2019 | Same topic: Automotive Industry Updates
Kia is set to introduce the Kia Seltos on November 6. With competitive pricing across the board, Kia wants this to be your next compact crossover. Will you bite?

This is not a drill, ladies and gentlemen. The 2020 Kia Seltos is coming, with pricing just released by Kia Philippines. The Seltos is the Korean carmaker's answer to the compact crossover segment, set to do battle against its platform twin Hyundai Kona, as well as the Ford Ecosport, Honda HR-V, and Subaru XV. It’s quite a diverse market of mini-SUVs that offer AWD, so what does the Kia Seltos bring to the table? Pick your poison. The Kia Seltos is available in a range of colors

If you feel like Kia’s done this before, you’re absolutely right. Kia has in fact been at the forefront of the compact crossover segment in the Philippines, albeit with the much-maligned Kia Soul. There was nothing wrong with that Soul; in fact, it was a perfectly capable crossover that lasted a good two generations, with the third generation still being sold overseas.

The Soul may have come a little too soon for its time because the local market was lukewarm to the idea of a raised vehicle that wasn’t quite an SUV. In retrospect, the notion seems quite unreal nowadays, considering the ubiquity of compact SUVs on our roads.

Kia has since opted to scratch the Soul from its local lineup altogether, and bring in what they believe will suit the market better. The wait is over for the Kia Seltos in the Philippines

The local Kia Seltos will most likely feature two engine options; a 2.0-liter naturally-aspirated engine that makes 147 hp and 180 Nm of torque with Infinitely Variable Transmission or IVT (a subset of CVTs that has a zero gear ratio), and a 1.6-liter turbocharged engine that puts out 175 hp and 265 Nm of pulling power, with the output channeled to the drive wheels via a 7-speed dual-clutch transmission.

Since the car is based on the Kona, expect similar driving dynamics, but Kia wants to give the Seltos a more sophisticated and sporty appeal, far away from Hyundai’s funky styling. 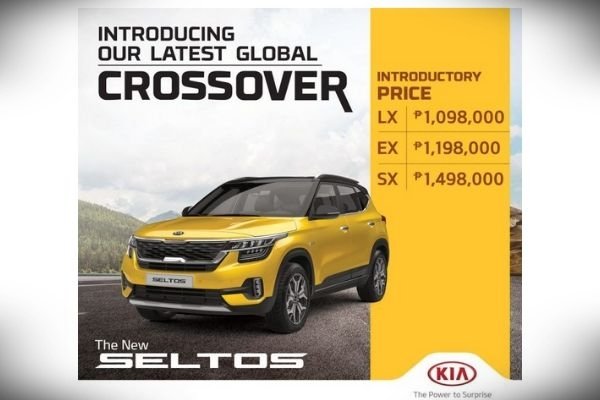 Pricing for the Kia Seltos pits it squarely against its rivals

>>> Check out for the latest changes in Kia Philippines price.

At the time of writing, Kia has now shipped the Seltos to our shores, ready for buyers to enjoy. The latest addition to the Kia lineup will be formally launched on November 6, so stay tuned to Philkotse.com for updates!