The 2021 Ford F-150 Raptor has officially made its global debut. It features a refined yet more aggressive look along with an improved suspension tuning as well as smart tech gizmos.

From the looks of it, the new Ford F-150 Raptor is a truck built to conquer any terrain with the drive to satisfy one’s needs for some high-performance off-road experience. On the other hand, Ford has confirmed that the F-150 Raptor R will be making its debut next year. 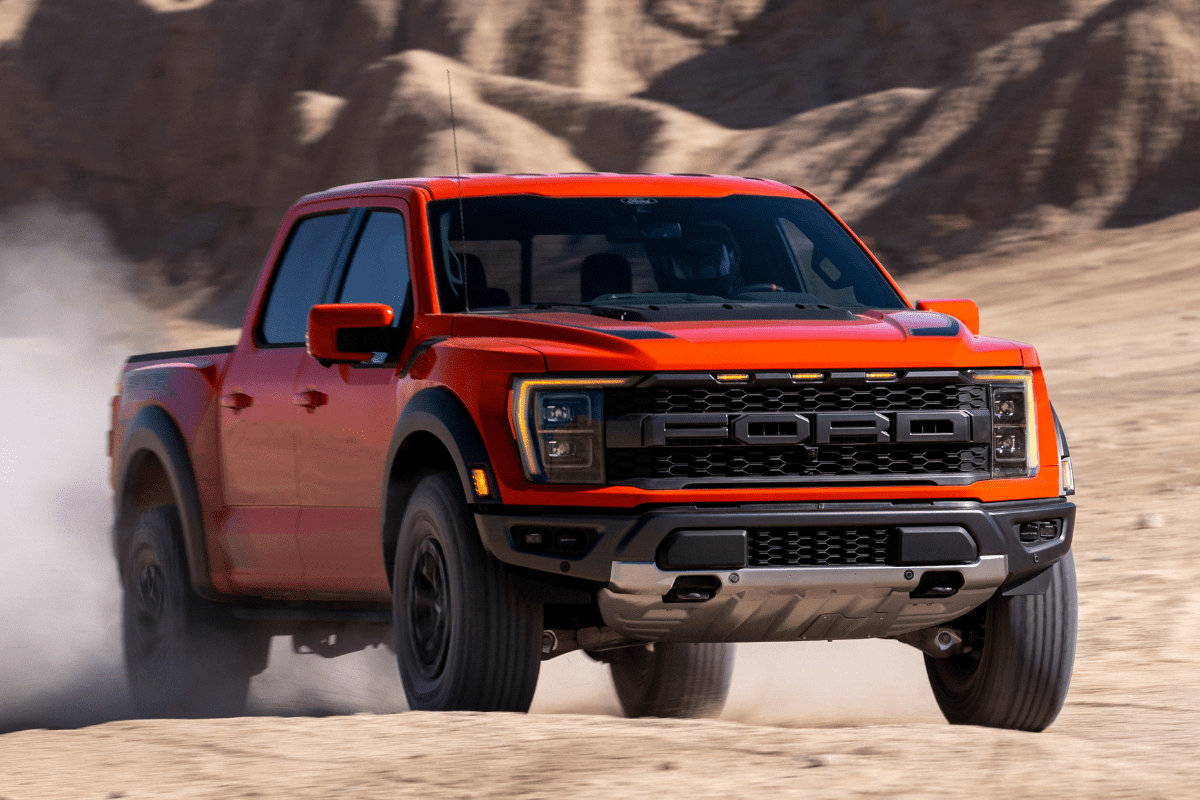 It is fitted with restyled LED headlights with inverted L-shaped signal lights. The F-150 Raptor also comes with a slimmer grille while the amber lights look sleeker and more distinctive.

The front bumper also gets a new look and features design details that are more subtle. Moreover, the 2021 Ford F-150 Raptor is equipped with a revamped hood design. It now has a new heat extractor and functional side vents at the top trailing edge of the fender. The rear, on the other hand, has new LED taillights that have a more modern design as compared to the outgoing model while the truck’s tailgate has also been tweaked. The F-150 Raptor is finished off with a set of 17-inch aluminum wheels wrapped in either a 35-inch or 37-inch BFGoodrich All-Terrain tires. Placed right at the center is a 12-inch infotainment system that features Ford’s SYNC 4 tech. The F-150 Raptor’s head unit is also integrated with wireless Apple CarPlay and Android Auto compatibility. To add, the truck has an 18-speaker Bang & Olufsen sound system.

Ford believes that a high-performance off-road pickup is defined by its suspension. As such, the blue oval brand said that the 2021 F-150 Raptor has an improved suspension tuning.

Ford says that the 2021 F-150 Raptor has a redesigned running gear as well as an all-new five-line rear suspension. With that in mind, the F-150 Raptor is said to deliver more control and power to the ground with greater confidence over rough terrain at high speeds. Ford added that the F-150 Raptor’s largest-ever shocks are designed to better resist heat buildup and it is said to react even faster to terrain changes. This means that the truck can provide improved ride comfort while it’s driving through rough terrain. Adding to the list of new features is the 2021 F-150 Raptor’s built-in X-pipe, “trombone loop” exhaust system. The driver can adjust the sound of the exhaust in four distinct modes: Quiet, Normal, Sport, and Baja. Other tech features included in the truck is Ford’s over-the-air updates, terrain management system, trail control, and a 360-degree camera.

In addition, the truck is also equipped with Ford’s Over-the-air updates, Terrain Management System, Trail Control, and a 360-degree camera.

When it comes to power, the 2021 Ford F-150 Raptor is equipped with a twin-turbo 3.5-liter EcoBoost engine. The engine is connected to a 10-speed automatic transmission. Well, if you ask us, it’s more likely that the F-150 Raptor R could indeed come with a V8 power unit. The reason for this is that Ford needs to launch its counterpunch to the Hellcat-powered Ram TRX. The RAM TRX is currently being marketed as the “apex predator of the truck world.” That claim is backed up by the TRX’s 6.2-liter V8 Hellcat engine can make 702 hp and 881 Nm of torque. With that, the Ram TRX can easily eat the F-150 Raptor for breakfast.

As such, it seems that the RAM TRX can continue enjoying its breakfast buffet of F-150 Raptors since its more formidable opponent, the Raptor R, has yet to be unleashed.

One of the most popular and comprehensive pickup truck is the Ford F-150. This generation was introduced since 2015 and undergone remarkable changes throughout the years. The pickup truck has improved in terms of towing and hauling capacities, for those with 10-speed automatic transmission and select engines with extra engine power. In 2019, the Ford F-150 model added new shocks, new engine as well as features like forward- collision warning, pedestrian detection, and automatic emergency braking. In 2020, all engines of the pickup truck come with a 10-speed automatic transmission. It is equipped with engine options and several features. It suits all categories, whether it is for an entry-level truck or luxury. Moreover, aside from the customization options offered, the Ford F-150 features a powerful engine, appealing style, and a roomy interior as well. For cargo capacity, the pickup truck provides three various bed lengths such as 5 feet and 6 inches, 6 ft. and 6 in and 8 ft. Also, there are some small-item storage spaces available. Furthermore, it is available in six distinct colors: Star White, Oxford White, Agate Black, Rapid Red, Blue Jeans, and Iconic Silver. At present, the Ford F-150 has two different trims - Ford F-150 4x2 Lariat SuperCrew AT that costs Php 2,698,000 and Ford F-150 4x4 Platinum SuperCrew AT that costs Php 2,998,000.