BMW M5 gets styling makeover along with a bigger kidney grille

Sure it’s larger, but it still looks great and isn’t as gigantic as the 4er's.

BMW has unveiled the new, facelifted BMW M5 Competition. And from the looks of it, the German automaker is doubling down on giving their new models a larger version of the company’s signature “kidney” grille.

Compared to other recent models however, the one on the BMW M5 is a bit more subtle.

Sharper than ever. The new BMW M5.

At a glance, the new BMW M5 for sale still retains its overall shape. It’s still got that sporty, sloped carbon fiber roof, with the changes more apparent at the front end. On the sides, not much has changed and the blacked out M5 “gills” makes their return. New however is the set of more aggressive looking 20-inch, double-spoke wheels in Orbit Grey color. The BMW M5 Competition. Note the larger grille, and the new air airtakes

With this facelift, the BMW M5’s kidney grille has a more “horizontal” orientation. BMW stretched it down further towards the front apron, and the aforementioned itself has been given larger air intakes towards the sides.

It also comes with a large hexagonal-shaped intake at the center, which is responsible for cooling the car’s oil. 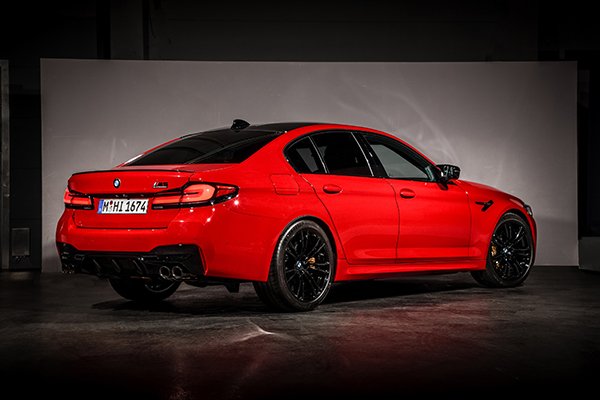 Want a fast, luxurious, but sporty car that can also carry up to four people plus the driver? Then the M5 is your answer

Also new is the BMW M5’s pair of adaptive LED headlights, and the new BMW Individual lights Shadowline which provides a dark-tinted trim for the headlights. Think of this like an eyeliner, which of course provides the front of the M5 this darker, edgier, and brooding look.

The M5’s rear has also been given a new look as it now comes with shiny black inserts, as well as a large, but stylish looking diffuser. The LED taillights have also been given a slight redesign, which makes the L Shaped pair look fresher. Check out that very premium interior

The heart of the BMW M5

Under the hood, the BMW M5 Competition is powered by a 4.4-liter V8 twin-turbo engine that can make up to 625 horsepower and a peak torque of 750 Nm. Paired with the powerful engine, is the eight-speed M Steptronic transmission which comes with manual mode.

Apart from the engine, the BMW M5 also has several mechanical improvements over the standard 5-series. There’s the xDrive that’s more biased towards the rear wheels, the M Sport chassis with a tuned suspension system, as well as the Variable Damper Control with Sport + on top of the usual BMW driving modes. Open the hood, and you'll find out that even the engine bay is a work of art

The updated BMW M5 Competition’s price starts at £98,095 in Europe (around Php 6.11 million). Sure, it’s a bit stiff for a saloon but remember, what you’re paying for after all, is the M5 Competition’s M-Sport capabilities.

For more news on the latest car releases, keep reading here on Philkotse.com.

BMW M5 2023
The BMW M5 possesses the elegance of an executive saloon and the engineering of a sports car. It is the perfectly balanced mix of astounding power and sheer luxury as the M5 boasts of the comfort and quality of the 5-Series business class sedan loaded with the race-track-ready specifications of the M Series. Currently on its sixth generation, the M5 is a testimony of BMW’s unparalleled engineering and groundbreaking driving intelligence. Its innovative technological features coupled with the new M xDrive all-wheel drive system and its powerful 4.4L M TwinPower Turbo engine make each drive safer and more comfortable.