All-new Honda Accord 2019 debuts for ASEAN, will it also come to the Philippines?

Apr 02, 2019 | Same topic: Most Updated Car Concept
The all-new Honda Accord 2019 for the ASEAN market is revealed at the 40th Bangkok International Motor Show and it has a hybrid variant.

Officially launched last week in Thailand and was displayed in the 2019 Bangkok International Motor Show, the new Honda Accord 2019 has exciting new features and capabilities.

Due to this, it has been noticed that the said car is one of the biggest in the show in terms for mass market appeal and interest as the Accord name has been with us for quite a while now as a very reliable, economic, and yet very classy choice of vehicle. One of those very exciting new capabilities we’ve mentioned is that the new, the 10th generation Accord for the ASEAN region will no longer be powered by the 2.0 and 2.4-liter, naturally aspirated engines it once had. Instead it will come with a 1.5 liter turbocharged engine and an optional 2.0 liter hybrid engine.

As of BIMS however, the Accord has no base, naturally aspirated variant. This definitely puts the new Accord at a higher price point than its competitors like the Toyota Camry. As for the Accord’s transmission, the auto torque converter is also ditched and replacing it is a continuously variable transmission. The Accord has no base, naturally aspirated variant As for the Accord’s transmission, the auto torque converter is also ditched and replacing it is a continuously variable transmission

The new Honda Accord hybrid version is equipped with a Sport Hybrid i-MMD (Intelligent Multi-Mode Drive) system which combines a NA 2.0 i-VTEC engine and two electric motors. The two aforementioned motors are powered by lithium-ion batteries much like vehicles from Tesla and many more electric vehicles available today.

The said batteries are stored under the boot which might affect its storage capacity for your stuff and spare tire. In total, the combined NA and electric motors can make up to 215 horsepower and more than 315 nm of torque. That being said about the Accord hybrid, we are still not sure whether or not it will make its way to us here in the Philippines.

While having a 1.5-liter turbocharged engine might make it look very similar to a Civic RS spec wise, the new Accord’s engine is rated to make a larger 187 horsepower and 243 nm of torque. This is significantly more powerful than previous version’s engines like the 2.0 and 2.4. Looks wise the new Honda Accord 2019 looks very much like the US version save for the corner lights which for the US Accord has an amber color. Also, the wheel design is different as the one shown in the BIMS has a beautiful multi-spoke design whereas the US version has a five-spoke design.

The Hybrid version of the new Accord has larger tires for more fuel economy. Much like the US version, the new ASEAN version is also larger with about 10 mm more width and 10 mm less height. The wheelbase is also now longer.

Inside, features of the new Honda Accord’s interior include a sunroof, exterior door lighting, leather seats, a heads up display, wireless charging, and a seven-inch infotainment system to name a few. As said before, the placement of the batteries for the hybrid might reduce the Accords’ boot space and that may be a large point for some people. A look into the new Accord's interior. 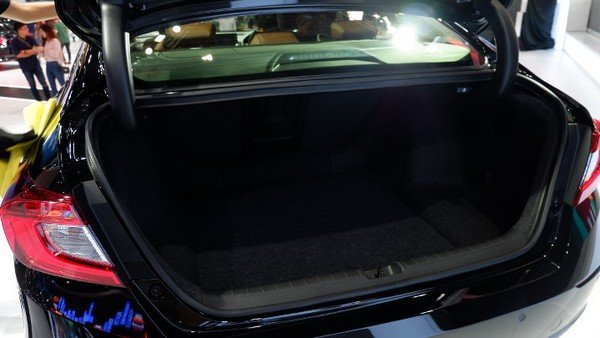 Another vast improvement that also comes with the new Honda Accord 2019 is the Honda Sensing system which includes; a Collision Mitigation System, an Adaptive Cruise Control, Lane Departure Warning System, and a 360-degree parking camera.