The hybrid Q5 will be driven by a 2.0L petrol engine and an electric motor.
Recently, the new Audi Q5 e-tron Quattro prototype has been spotted testing in the US forward of its global launch in 2018. The new Audi Q5 E-tron Quattro prototype has been spotted testing in the US
The new model is said to feature Audi’s EA888 turbocharged 2.0L 4-cylinder engine giving an output of 188 hp and 320 Nm of torque. Moreover, it will be powered by an electric motor delivering 108 hp and 300 Nm.

Following the latest regulations of the Chinese New Energy Vehicle, the electric power supplied to the Q5 e-tron will come from a floor-located lithium ion battery, allowing the SUV to travel a distance of 50 km. This figure is a significant improvement over its predecessor Q5 Hybrid. The electric SUV is able to travel a distance of 50 km
>>> View more: Audi makes us more surprised with self-driving Audi A8

The next Audi Q5 e-tron will be an iconic Quattro model, reportedly. The power, accordingly, is presumably fed to the front wheels via a 7-speed automatic transmission. In the meantime, the electric motor is positioned at the rear wheels. 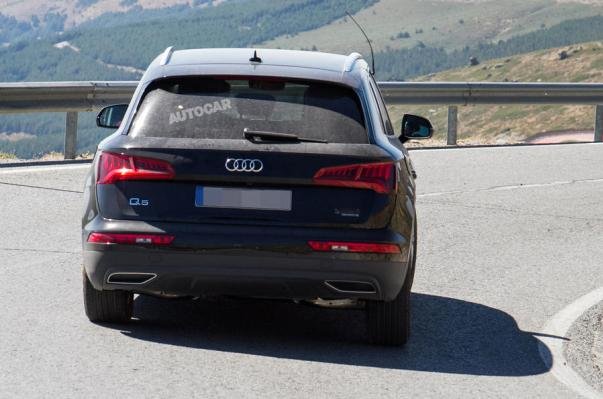 The next Audi Q5 e-tron will be an iconic Quattro model
Generally, the rest of the new Q5 remains the design seen on other conventional Q5s, except for a new e-tron badging up front. The SUV is expected to be the Audi’s fastest 2.0-litre-powered model in the auto market.

The forthcoming Q5 will be the third-generation e-tron to join Audi’s all-electric e-tron SUV family, following the on-sale Q7-etron and the on-sale A3 Sportback e-tron. Just wait for its debut early next year.

>>> To mark an important milestone for the delivery of the 100th Audi RS3 LMS, Audi has decided to redecorate its luxury race car in gold livery. Click here to see all images of this bizarre car.