Mustang EV hits SEMA and it has a really special something

At this year's SEMA Show, Ford displays the Mustang Lithium Prototype. It has 900 horsepower which is great but it also has a feature that many car guys would want to be more common on EVs. A stick-shift tranny.

While the world holds its breath for the Mustang-inspired EV crossover, Ford gave us one hell of a preview at this year’s 2019 SEMA Show. This one, however, is an actual muscle car called the Mustang Lithium prototype. As its name suggests, aff of its power is derived from electricity. >>> Check out: Ford and Volkswagen to work together in building EVs and many other vehicles.

Before you scream “Sacrilege!”, this electric Mustang can give its gasoline-powered sibling a fight. Its capable of generating 900 horsepower and an astounding 1,355 Nm of torque. Unlike most EVs, the Lithium comes with six-speed manual transmission.

In order to come up with this impressive one-off beast, Ford turned to automotive supplier Webasto, which supplied an 800-volt battery (similar to the Porsche Taycan) capable of supplying approximately one megawatt of power, double the amount produced by normal electric cars today, and enough to power 164 homes. Jumping Jupiter! Instead of the usual V8, the heavy lifting is handled by a Phi-Power dual-core electric motor along with dual power inverters. The motor is a single unit, which helps to lessen heat and generate more ussable power.

2. Ford Mustang Lithium Prototype: It has a freaking manual!

What caught the attention of many skeptical car enthusiasts is the Getrag MT82 five-speed manual gearbox capable of handling the Mustang Lithium Prototype’s 1,356 Nm of torque.

Having a stick shift boils down to one very important thing; making EVs fun. The added weight does make the EV Mustang slower, but that’s beside the point, since the transmission can enable it to make peak power all the time! 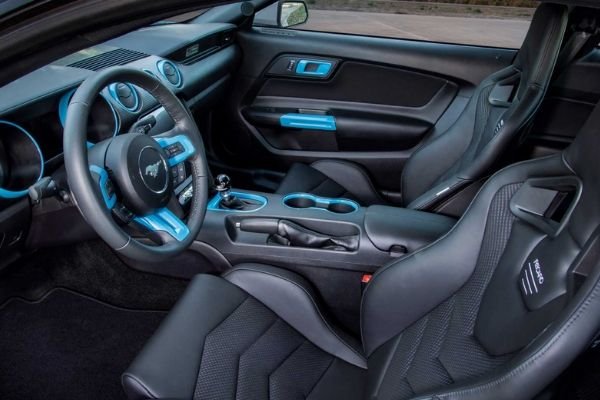 Yep, only a pair of Recaros will be able to keep you from bouncing around when driving this thing

To complement all that horsepower, Ford gave the Mustang Lithium Prototype a lowered suspension, a beefy strut tower brace, a fancy body kit with carbon fiber, a Super 8.8 Torsen differential, and six-piston Brembos brakes which are the same ones found on the Shelby GT350.

As an EV, the Lithium is anything but boring. And if ever Ford decides to actually greenlight the Mustang Lithium Prototype for mass production, well, let’s just say that more people will be attracted to the idea of buying and driving electric vehicles.

>>> Click here to have the best price of Ford Mustang in the Philippines. A lot of car guys wish that automakers will make EVs as fun as this.