Nov 15, 2019 | Same topic: Auto Industry: Latest Updates
Mitsubishi Xpander Cross 2020 is launched in Indonesia and it's a veritable MPV-SUV cross. Get it?

If you’ve been keeping tabs on auto industry news like us, you might’ve seen the leaked photos depicting a silhouette of what appears to be the Mitsubishi Xpander MPV. Turns out, it really is an Xpander, albeit with a sportier design when it was finally revelead in Indonesia. The front end on the Xpander Cross reminds us very much of its bigger uncle, the Strada.

The first thing you’ll notice right off the bat is the Xpander Cross’ exterior upgrades. Mitsubishi attached a faux skidplate along with a revised bumper. The look on the fascia is seemingly mirrored on the rear end, with a similar-looking diffuser adorning the rear bumper assembly.

Mitsubishi also did away with the chrome grill, instead of giving the Xpander Cross a robust-looking blacked-out one that ties up the front fascia nicely. There is also a set of new LED headlights and foglights. From this angle, you can see the beefy fender flares and the increased ride height While not exactly a skid plate, the added piece makes the rear look great nonetheless

To make it stand out more, Mitsubishi gave the Xpander Cross a set of 17-inch alloys wheels mounted on larger tires.

Beyond the aesthetic changes, the new 2020 Mitsubishi Xpander Cross boasts 225 mm of ground clearance, 20 mm higher than the regular Xpander. This higher stance is expected to make the Xpander Cross more capable of negotiating floods and unpaved roads.

Apart from the exterior changes, the interior gets a redesign too, with the seats now clad in two-tone black and red colored leather (for the Premium trim), with the dashboard getting the same treatment. 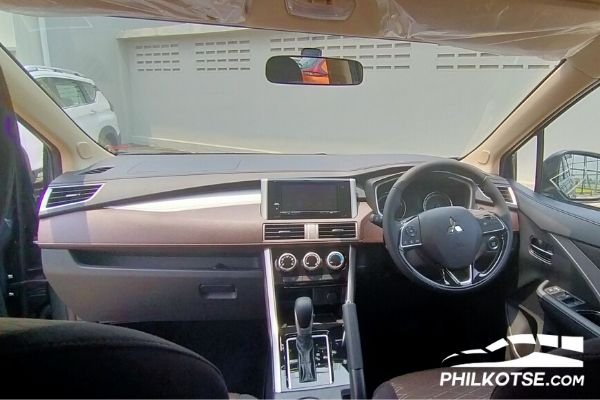 An alternate view of the interior

The Xpander Cross shares the same 1.5L MIVEC engine with the Mitsubishi Xpander. Mitsubishi, however, claims that the vehicle will run quieter and is now more efficient, although it's unclear if this is a result of improved engine tuning or better cabin insulation. Power is still sent to the front wheels via a 5-speed manual or a 4-speed automatic. At the moment, Mitsubishi says it doesn’t come with four-wheel drive. The Xpander Cross launch event, with a festive tropical theme