Turbo Mazda3 is also available for sedan, but you still can’t buy one

Jul 10, 2020 | Same topic: Automotive Industry Updates
After the launch, there’s still no word on when it’s arriving at dealers.

It’s official: the new Mazda3 turbo is coming for the 2021 model year, at least in the U.S. market. While previous reports suggested that forced induction will only be available on the Sportback, Mazda is offering it on the sedan version as well.

This is a departure from previous iterations where turbocharging was exclusive to the hatchback. For the first time as well, the turbocharged Mazda3 comes with the i-Activ all-wheel-drive (AWD) system. How does the idea of a turbocharged Mazda3 sedan sound?

That’s good news. The bad news is that there’s still no word from Mazda as to when its latest road rocket will land in the Philippines, or if it’s even coming here at all. It’s bad enough for Mazda fans that the famed Mazdaspeed badge isn’t coming back. This means that the new turbocharged Mazda3 will have to make do with a six-speed automatic, instead of the manual gearbox that made the first two Mazdaspeed3s so much more engaging to drive.

By way of living vicariously through the eyes of American customers, we’ll just have to content ourselves with a rundown of what to expect on the Mazda3 turbo. The blower-equipped sedan and hatchback variants physically resemble their naturally-aspirated counterparts, sporting the same lines and curves which earned them World Car of the Year honors. 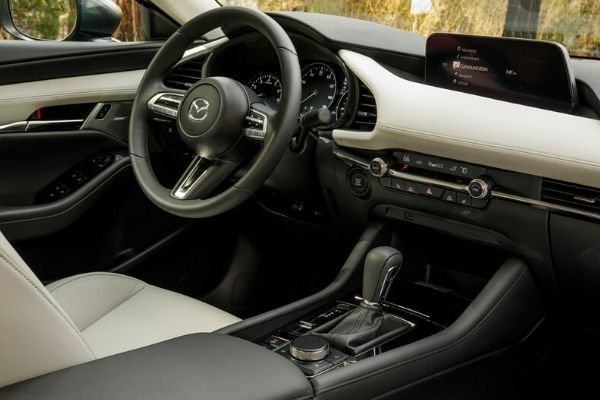 A Premium Plus Package enhances styling with a gloss black on the front air dam, rear lip spoiler, and roof spoiler. There are also gloss black details on the side mirrors, prominent “TURBO” badging on the trunk and engine cover, and a set of 18-inch black aluminum-alloy wheels.

Leatherette seating is standard for five inside, with a heated leather-wrapped steering wheel, paddle shifters, and chrome finishes. A power moonroof is available for breezier drives, with dual-zone climate control to combat whatever the weather brings outside.

The Active Driving Display heads-up unit makes it easier to monitor the vehicle’s operation without glancing away from the road. An 8.8-inch touchscreen is connected to 12 Bose speakers, coming with Apple CarPlay, Android Auto, and a three-year trial of Mazda Connected Services. 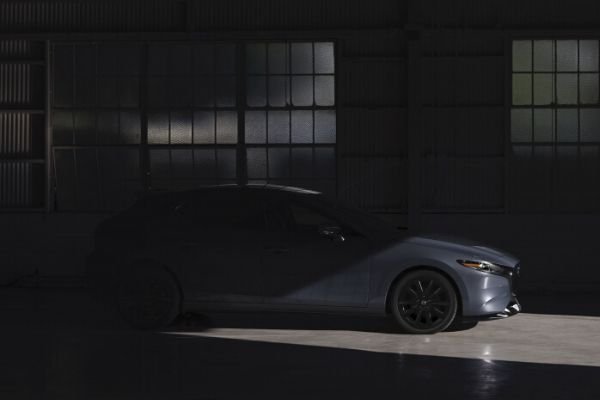 The Skyactiv G 2.5T’s output varies with the fuel’s octane rating, pumping out 220 hp and 420 Nm of torque on regular (87 octane) fuel, or 250 hp and 433 Nm of torque on the more premium (93 octane) stuff. Mazda will include the i-Activsense suite of safety technologies on the Mazda3 turbo, encompassing features such as Radar Cruise Control with Stop and Go, Smart Brake Support, Blind-Spot Monitoring, and Driver Attention Alert. The Premium Plus option adds Rear Smart City Brake Support and a 360° View Monitor with a high-definition display.

With forced induction now offered on the sedan as well, the Mazda3 turbo just became twice as exciting to anticipate. We hope that we won’t have too long to wait.

The latest news on upcoming models only at Philkotse.com.