Let’s see just how much the BT-50 has grown up.

In November 2022, Mazda finally launched the all-new, third-generation BT-50 pickup truck for the Philippine market. And as we’ve expected, it now shares the same mechanical underpinnings with the third-generation Isuzu D-Max. So this begs the question: just how different is the new BT-50 from the outgoing model? Mazda BT-50: The Kodo design language on a truck

At first glance, the 2022 Mazda BT-50 definitely gives off the contemporary Mazda vibe. That’s because despite being based on the D-Max, Mazda actually gave the BT-50 unique body panels, which exhibit the company’s Kodo design language.

As a result, the front end looks very much like the ones on the Mazda’s CX series vehicle lineup. The grille is now wider and more intricate-looking, compared to the simpler single slat design found on the old BT-50.

Another notable change is the pair of headlights which are now swept back, instead of upwards on the previous generation model. The said lights look slimmer as well. 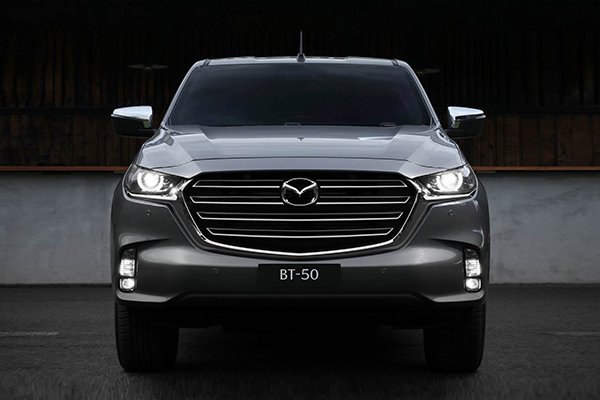 And finally down below, the new Mazda pickup truck now features a more prominent bumper, which houses a set of rectangular fog lamps.

There are however, things that remain the same, like the tasteful amount of chrome and the creases on the hood, both of which provide a macho, yet dignified look for the truck.

If one looks at the new BT-50 from the side, it’s also very evident that the new BT-50’s front end has a more horizontal orientation compared to the old one’s curved front fascia. Further towards the doors, you’ll also notice that the new BT-50 has fewer character lines. However, it does have a single crease running across the lower part of the doors. Towards the rear, the new Mazda BT-50 now uses a pair of vertical tail light clusters, instead of the previous parallelogram-shaped pair, which split into two whenever you opened the tailgate found on the old model. We reckon that the new taillights were much simpler to implement, and they look more modern too. Inside, the third-generation BT-50 has definitely grown up to be a more mature-looking vehicle. It now favors soft surfaces, mostly covered in leather and fabric, instead of the plasticky, utilitarian interior of the former model. The steering wheel is also like the sleeker ones found on contemporary Mazda models, and the aircon vents are now rectangular. Seats on both the new BT-50 and old BT-50 (top-spec variants) are also clad in leather. The new BT-50 4x4 also gets a push-to-start button with a remote start system. In comparison, the old BT-50 came standard with a turn-key ignition system.

On the dash, the 9-inch touchscreen head unit is definitely larger than the old one’s display. Moreover, the new head unit now comes with Android Auto and Apple Carplay, with a wireless version for the latter on the new BT-50 top-spec variant.

In comparison, the old BT-50's head unit only had Bluetooth, USB connectivity, and a proprietary smartphone mirroring app. Furthermore, the old model only came with six speakers, whereas the new one either gets eight speakers, or six speakers depending on the trim. Another huge change for the new BT-50 is the addition of the i-Activsense driver assist suite on the top-spec variant. These include features like lane departure warning, autonomous emergency braking, blind-spot warning, automatic high-beam control, adaptive cruise control, and forward collision warning.

The old BT-50, even the top-spec variant, didn’t get those high-tech features. But like the new version, it did have hill-start assist, anti-lock braking with electronic brake-force distribution, and stability control. By today's standard's, the old BT-50's screen was a bit small

For the new top-spec BT-50 however, it expands those standard safety features as it now has seven airbags (other variants have dual airbags). It also adds on hill-descent control, and also a front parking sensor on top of the rear sensor.

Like the old BT-50, only the new version’s top-spec variant gets a 4x4 drivetrain paired with a locking differential.

But then again, the new version now has a newer engine, specifically the 3.0-liter 4JJ3-TCX inline-4 turbodiesel for all four variants. At maximum, this can produce 187 horsepower and 450 Nm of torque. For transmissions, both the old and the new BT-50 came with either a six-speed manual gearbox or a six-speed automatic transmission. Both also use a double-wishbone front suspension, and a leaf spring type suspension for the rear.

Under the hood of the BT-50 is a 3.0-liter 4JJ3-TCX inline-4 turbodiesel engine. At maximum, it can produce up to 187 horsepower and 450 Nm of torque. Available transmissions include a six-speed automatic and a five-speed manual. For drivetrains, only the top-spec variant comes with 4x4.