There are a lot of things that we’re jealous of Thailand. First, is that according to the Centre for COVID-19 Situation Administration, the South East Asian country has had no cases of COVID-19 locally for a month now. All of its 3,202 active cases were released, and many businesses and events that were once postponed are now in full swing.

One of those events is of course the Bangkok International Auto Show 2020, which like BIMS of previous years, remains one of the largest and most attended car events in the region, and despite Thailand being COVID-19-free, everyone at the event was wearing masks. The Honda City RS Turbo at the 2020 BIMS

Why are we talking about BIMS 2020? Well, that’s because it reminded us of another big thing that Thailand has that we’re covetous of – the really awesome Honda City RS Turbo.

Introduced in December 2019, this Honda City is powered by a 1.0-liter turbocharged inline-3 engine that can churn out 119 horsepower at 6,600 rpm and 173 Nm of torque at 4,800 rpm. Sure, the locally available 1.5 Honda City engine makes just one horsepower less, but the City RS Turbo just makes more maximum torque at a slightly lower rpm range. Like the locally available Honda City, the City RS Turbo sends its power to the front wheels, and like the high-spec Philippine variants, it makes use of a continuously variable gearbox, although it has a semi-automatic shift mode with seven virtual speeds.

Apart from that, just look at the City RS Turbo’s exterior. Its rear is adorned by a beefy looking air dam, the different looking black set of alloy wheels, the segmented looking LED headlamps, and the blacked-out RS grille and lower bumper. It’s definitely sporty, and shall we dare say that in the Thai market, it’s definitely one of the sportiest looking cars in its segment. And yes, to rub more salt in the proverbial wound, the Honda City RS Turbo that’s available in Thailand is also a variant of the seventh-gen GN City. The next-generation City that was launched last year, a.k.a. the one we still don’t have. In the Thai market, the City RS Turbo is priced at ฿739,000, or Php 1,153,854 at the current Thai Baht to Philippine Peso exchange rate. 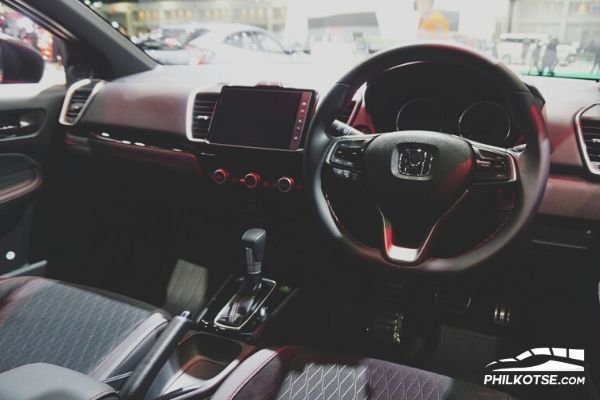 The interior of the City RS is adorned with red stitching

Don’t worry though, because most models launched in Thailand have been proved to eventually make their way to the Philippines. So yes, it’s only a matter of time until Honda Cars Philippines, Inc. will introduce the new City, as well as the Honda City RS Turbo. The latter’s more of a wish, but who knows.