With only a few days away, the price details on the long-awaited Toyota Supra has been revealed through a photo pertaining to the Toyota Supra’s pricing and available colors.

The said photo has been popping up in a lot of Facebook groups particularly on the site’s online marketplace where people buy and sell used vehicles. The post in question even says that you can contact a person for inquiries and reservations.

According to some sources, the photo in question is purported to be the real deal and is accurate. Not that we disagree with the source but we’ll just have to wait until the release of Toyota Supra on July 9 for the official pricing. True or not, the prices here can form an estimate for the real price of the Toyota Supra 2019

Regardless, the photo states that the BMW CLAR  based Toyota Supra is priced at Php 5,090,000 for the Matte Storm Gray, Php 5,050,000 for the white metallic, black metallic, lightning yellow, silver metallic, ice gray metallic, and deep blue metallic and lastly, Php 4,990,000 for the prominence red.

Further rumors are also saying that the aforementioned Php 5.09 matte storm gray will be limited to a super limited one unit run for the Philippines market. As with the entire photo though, we’ll just have to wait and see if that is indeed true.

Don't forget to check our Toyota Philippines price list regularly to keep updated the latest changes in the pricing of Toyota models. The supposed pricing details of the Supra based on the photo above most obviously sits in between the lower spec Z4 sDrive20i and the top-spec variant of the said BMW coupe called the BMW Z4 M40i both of which are already available here in the Philippines.

Also, note that the BMW Z4 shares the same platform with the new Toyota Supra which is the BMW Cluster Architecture of CLAR platform. So from that, we can only guess that differences that the Supra has to the BMW Z4.

Toyota Supra 2019 Philippine variants: Any news at all on that?

The specifications for the Philippine version of the Toyota high-performance coupe in question are not yet available to the public nor are the variants and their respective prices.

In the US though where the new Toyota Supra was released a couple of months ago, the Toyota made coupe comes in two variants, a turbocharged 2.0 inline-4 capable of making 194 horsepower and 320 NM of torque while the more powerful 3.0 inline-6 variants make about 335 horsepower and 495 NM of torque.

Both use an eight-speed automatic to which the public, especially on popular car forums didn’t quite agree with.

We here at Philkotse.com hope that these two variants will make it to the Philippines. But we might also hazard a guess that the Toyota Supra will inevitably engage in friendly competition with its German brother. Other than the rumors with regards to the Toyota Supra’s prices here in the Philippines, Toyota Racing Development or TRD already has an aero package available for the said performance coupe.

It features the trademark “Sakana” stabilizer fins on rocker extensions, a diffuser extension and a lip-style spoiler, and a pair of side pieces that strangely covers the side intakes.

Also included are 19-inch aluminum wheels and side mirror covers. 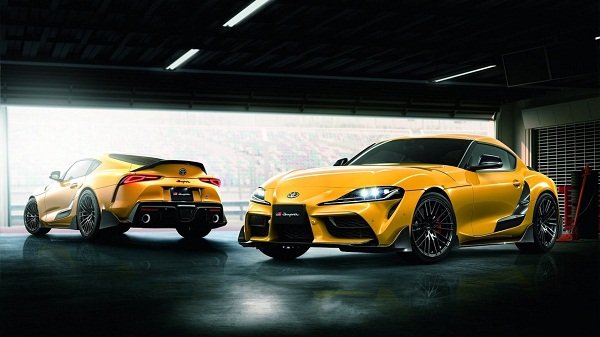 This is the TRD package for the Toyota Supra. It alone costs about P1.3 million

The said Toyota TRD package for the Toyota Supra costs about Php 1.34 million and so is not really cheap. Regardless, the said package improves the Supra’s looks making it more aggressive than ever before and will definitely have an effect on its aerodynamics.