After years of waiting, the all-new Toyota Supra has finally arrived. Thanks to Toyota Motor Philippines, this highly anticipated sports car is brought to the Philippine market. In terms of sports cars, the Supra has long been considered as the brand's ultimate. The current generation Supra has finally been revived with German DNA into its parts. It's no wonder the overlook of the Toyota GR Supra is very impressive. The aesthetics are also geared towards tuners, modders, and enthusiasts. Its dimensions and chassis are similar to that of the Z4. However, the brand provided twists in terms of styling, design, and everything else in between. The interior of the MkV Supra is absolutely a collaborative effort but with traces of the Toyota brand. The Supra available in the Philippines comes with a 3.0L twin-scroll turbocharged in-line 6-cylinder engine. The fifth-generation Toyota GR Supra has remarkable design elements, including LED headlights with six lenses, a 19-inch forged aluminum, as well as, dual exhaust pipes. It also comes with a list of standard features, such as a heads-up display, touchscreen infotainment setup, multi-information display gauge, and a sound system composed of 12 speakers. The current generation is the 5th generation of Toyota GR Supra. In the Philippines, the prices of the supra depend on the variant color. It is available in eight colors: Matte Storm Gray, Deep Blue Metallic, Ice Gray Metallic, Silver Metallic, Lighting Yellow, Black Metallic, White Metallic, and Prominence Red.

Toyota Motor Philippines introduced the Toyota GR Supra in the local market on July 9, 2019. This current generation is the successor of the A80 Supra, featuring a 3.0L twin-scroll turbocharged in-line 6-cylinder gasoline engine.  The version available in the Philippine market is the European-spec type and only offered in a single variant.

The prices depend on the color choice of the buyer. Only 16 Toyota dealerships in the country have been certified by Toyota Motor Philippines to market this Supra. According to the company, these dealerships are equipped and capable of servicing this sports car. They are the following:

The Toyota Supra is all about driving pleasure

This 2-seater Coupe offering from the Japanese manufacturer features a sleek body to allow the car to cut through the air. The front part of the vehicle gets all-LED headlights, reverse lights, turn signals, daytime running lights, taillights, and fog lights. An auto high beam is also equipped in its headlights. The rear part of the vehicle features a dual exhaust pipe mounted just below the bumper. The GR Supra rides on sporty 19-inch forged aluminum wheels to maximize the grip at the back. The Toyota Supra prices in the Philippines vary depending on the model's color. It is available in eight colors: Matte Storm Gray, Deep Blue Metallic, Ice Gray Metallic, Silver Metallic, Lighting Yellow, Black Metallic, White Metallic, and Prominence Red. The Matte Storm Gray Supra is the most expensive.

Inside the Toyota Supra, there's an 8.8-inch TFT LCD for the tachometer and speedometer. The cooling is handled by the car’s push-type dual-zone climate control. It allows the occupants to have their own desired temperatures.

In the center part of this performance car, there’s an 8.8-inch widescreen TFT display with Bluetooth and USB capabilities. The Supra is also equipped with a JBL 12-speaker HiFi surround sound system. Inside the Toyota Supra, there's an 8.8-inch TFT LCD for the tachometer and speedometer

The leather-wrapped steering wheel comes with a 3-spoke design and paddle shifters. It also contains audio controls, telescopic adjust function, manual tilt, and cruise control. The driving position is excellent – low, and the standard seat wraps around the driver's back, and it comes with adjustable side bolsters. The Toyota Supra sits on BMW’s Cluster Architecture – the same underpinning used in Z4. It is the main reason why it has the same dimension and chassis as its German counterpart roadster.

The Toyota GR Supra is equipped with a Double-joint McPherson Strut for the front suspension, and the rear setup is handled by the multi-link suspension for the rear. A limited-slip differential is also featured in this car for its rear axles.

Aside from the platform, the Toyota Supra also shares the same engine, running gear and gearbox from its German counterpart roadster. Sitting under the hood is a Toyota-tuned 3.0L Twin-Scroll Turbocharged gasoline engine. The unit produces 335 horsepower and 500 Newton-meter of torque. The engine power is delivered to the rear wheels via an 8-speed automatic transmission. It propels this performance car from 0 to 100 km/h in 4.4 seconds. The top speed is 250 km/h.

If you want to learn more about this sporty car, don't forget to read in-depth Toyota Supra review on Philkotse.com. 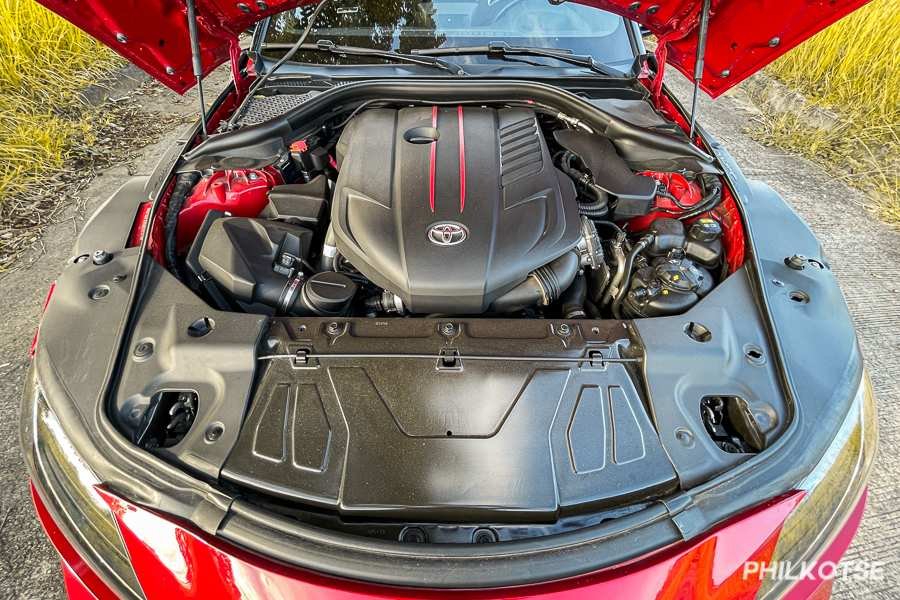 How many seats does the Toyota Supra have?

The Toyota Supra is a 2-seat coupe.

What is the top speed of the Toyota Supra?

What is the engine of the Toyota Supra?

The Supra is powered by a Toyota-tuned 3.0L Twin-Scroll Turbocharged gasoline engine producing 335 hp and 500 Nm of torque.

Where can I buy a Toyota Supra in the Philippines?

The price of the Toyota Supra in the Philippines starts at ₱4,990,000 for the entry-level 3.0 Turbo AT, while the top-of-the-line Toyota Supra 3.0 Turbo Black Metallic AT is priced at ₱5,050,000. For more details, please refer to our 2021 Toyota Supra price list as follows:

*** Please note that the Toyota Supra‘s prices might differ in some showrooms and should serve as reference only. 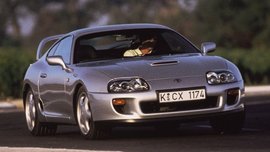 The Supra A80 is one of the most popular Toyota. Here’s why. 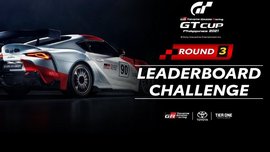 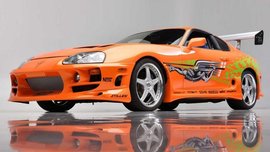 Fast and the Furious Toyota Supra auctioned off for P26.8-million