What’s the difference between BHP and WHP?

This could help you with your next car purchase.

When looking for a brand new car, one of the aspects that are commonly asked or looked at is the horsepower rating. By simple definition, horsepower is the rate at which the torque produced by an engine can be done.

Car manufacturers have carefully focused on the number of horsepowers their cars should produce as it is a huge selling point especially for those who know even a few about engines. But of course, this isn’t always the case as some choose a car based upon its brand, design, or features. Do cars with higher horsepower ratings mean it is faster than those with lower horsepower ratings? Yes, but to some extent. There are also other factors to consider when it comes to determining how fast a car can run such as torque, weight, tires used, aerodynamics, and more.

There are two common types of horsepower that is used in the automotive industry. These include the wheel horsepower (WHP) and brake horsepower (BHP). The two are quite different from each other and are measured differently. With that in mind, let’s take a deeper look at the two said horsepower types to see what are the differences between BHP vs WHP.

I. What does BHP stand for? If you look at the brochures, car dealerships are listing the BHP and not the wheel horsepower. Well, it makes sense to put the BHP over the WHP so the numbers will be higher. Also, the BHP is constant across all variants of a model unlike the WHP as different transmissions or drivetrains change WHP. So for example, if the Toyota Wigo’s 1.0-liter gasoline engine is said to produce 66 hp, then it is the model’s BHP.

>>> Related: A detailed explanation of car's BHP and Torque

II. What does WHP stand for?

As the name implies, the wheel horsepower is the power generated at the wheels. The power is measured using a dynamometer or better known as the dyno. You probably have seen one of these tests already as it is commonly done especially for car enthusiasts.

The dyno works by running a car on its metal rollers and the car runs at full speed to determine both the maximum horsepower and torque. If you decide to run your car on a dyno, be sure that you go to a reputable shop as some cars overshoot. Installing a turbo in your car increases its horsepower rating

The reason why we said earlier that the WHP is always lower than the BHP is that there’s power loss in other components that need to run as well, such as the clutch, transmission, alternator, differential, driveshaft, A/C, and more.

>>> Related: Torque and horsepower: What is the difference?

III. What are the differences between BHP vs WHP?

The WHP of your car will change more often than your car’s BHP as the WHP relies on its power output on many car components. So say if you install numerous amounts of car accessories, your alternator will need to be powered more to deliver more energy.

Numbers-wise, the WHP of your car is 10 to 15 percent less than the BHP due to the power loss. Moreover, if your car is designed with an AWD configuration, the numbers will increase to 20 to 25 percent as it will require to power more wheels. 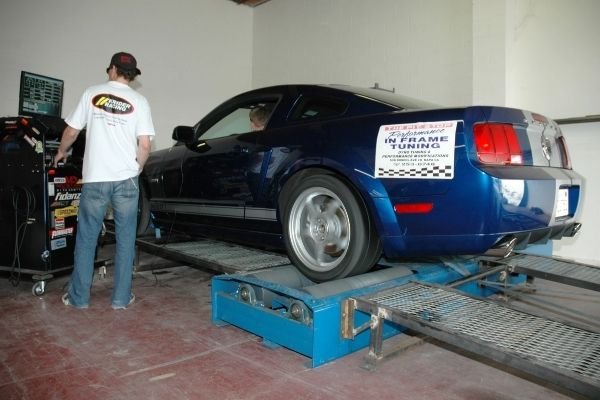 The dynamometer is the standard way of measuring a car's horsepower [Photo: TURNology]

However, you don’t need to measure your car’s BHP anyway since it is already listed down on its brochure by your car’s manufacturer. The rated BHP of your car will hardly change over time. It will show significant changes when your car runs for more than 100,000 kilometers or depending on how it is maintained. Your engine components such as piston and cylinder wear over time causing it to lose compression. Without proper compression, the power extracted from the piston is lessened. This causes your car’s horsepower to be lessened as well.

Q: What is horsepower?

Horsepower is the rate at which the torque produced by an engine can be done. This means that if your car has a high horsepower rating, then it can accelerate faster as compared to those vehicles with a lower horsepower rating.

Q: How to calculate horsepower?

To calculate your car’s horsepower, you would need to multiply your car’s rated torque to the running RPM and multiply the result to 5,252.

Q: How to measure my car’s wheel horsepower?

You can measure your car’s wheel horsepower using a dynamometer or also known as a dyno. The wheels of your car will be running on a dyno’s metal rollers that will calculate the amount of power your wheels produce.

Q: Do car dealers use brake horsepower or wheel horsepower?

Car dealers advertise their cars using their brake horsepower rating. The numbers can change depending on the transmission drivetrain configuration used so using the constant BHP is more suitable.