There are several reasons as to why cars, especially old ones lose some amount of horsepower. To learn the specifics and a little bit on how to fix them, let's find out with Philkotse.com.

You take it for a weekend spin through the Marilaque-Infanta Highway where you come to a straight portion with no other vehicles around.

You floor the pedal, just to test your roadster’s acceleration and top speed. The engine roars, but when you glance at your speedo, you see that the needle barely touches 90 kph. You gun it again and again, hoping that it’s just a fluke, but you still get the same results.

It’s frustrating as heck, especially as you’ve researched beforehand that a stock Miata should be able to achieve speeds of up to 203 km/h.

You bring the Miata to a tuning shop and subject it to a dyno test, whereupon the technicians deliver the bad news: your ride only registered 100 horsepower, about 30 short of what a 1.8L 1996 Miata typically makes based on its spec sheet.

You feel gutted and cheated, raging and whining at the injustice of it all. Over time, a car's engine loses power and falls below specifications

Fear not, frustrated friend, because might just have an idea how those 30 horses escaped from under the hood. Better yet, we’ll tell you how to rope them back in, for your engine to take advantage of! So buckle up, sit tight, and read closely.

As we have discussed in previous articles, a typical gasoline engine needs four things before it can make any power: spark, compression, fuel, and air. Anything that affects one of these factors can cause engine problems.

Keeping this in mind, we can now isolate these in relation to why your car might feel significantly underpowered as it ages.

This is generated by spark plugs within the engine. The spark ignites the air-fuel mixture, facilitating combustion that moves the engine’s cylinders and propels the car forward.

One important thing to note about spark plugs is that deposits can accumulate on it over time. Many instances I’ve noticed a number of drivers take out their used spark plugs, after which they smoothen down both the center and ground electrodes with sandpaper.

They do this to remove the carbon deposits that have collected there and to ensure that the plugs can easily generate a spark again. 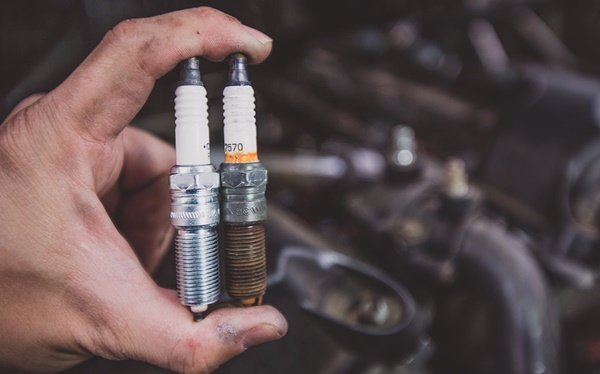 Parts of a spark plug

In some cases, a spark plug will have already deteriorated to the point that it warrants a replacement instead. Doing either of those things minimizes the risk of a faulty or misfiring spark plug.

Other parts of the engine where carbon deposits love to accumulate are on the pistons and even on the cylinder walls. These can create harmful hot spots that jeopardize your engine’s ignition timing, causing engine knock that robs your engine of its power.

Unlike faulty spark plugs that are relatively easy to clean or replace, this problem can be a bit more labor- and resource-intensive, making it necessary for the engine to be taken down and apart.

The spark ignites the air-fuel mixture, facilitating combustion that moves the engine’s cylinders and propels the car forward

If you’re into DIY car fixes, you can try to remove carbon deposits by yourself. After removing the engine cylinder head, position the pistons in such a way that the valves are closed, then scrape gently using a non-abrasive pad with a dash of solvent.

Take care, not to scratch and dig into the aluminum material, as this might end up causing more problems down the line for your engine.

Also, avoid having the grit you’ve just removed to fall into the engine’s valve chambers. Finish it off by doing a final inspection of the cylinder deck and piston tops, before installing a new head gasket.

The lack of compression can contribute to power loss, especially in older engines. More often than not, quick fixes won’t work since the components have worn out over time. There are a number of examples of how an engine can lose compression:

As friction parts, piston rings will definitely wear down as time passes. If they wear down, a condition known as blow-by occurs.

This happens when the high-pressure air and fuel mixture or combustion gases, which are intended to push the piston down with the cylinder wall, instead of escape to the crankcase, causing your engine to lose power. Another effect of blow-by is that it causes your engine oil to become dirtier more quickly. Piston rings will definitely wear down as time passes

As with the pistons, carbon deposits can also accumulate on your engine’s valves and valve seats. If that happens, the valves are unable to fully close, allowing air to escape. This has the effect of lowering your engine’s compression ratio, resulting in that annoyingly loud backfiring we hear on older cars.

As mentioned earlier, these are harder to repair, entailing major disassembly in order to get to the necessary engine parts. One quick fix would be to spray commercially available valve cleaners through a vacuum line while your car is idling. Anything that prevents or obstructs fuel from entering your engine’s cylinder will definitely cause your car to lose power. Two of the areas where that might happen are:

In modern cars, fuel is fed into the engine from the tank using injectors, which spray the fuel under high pressure as micro-sized droplets into the combustion chamber. Since injectors are sensitive, they will inevitably clog up over time due to a combination of heat and poor quality fuel.

The fuel injector sensors will not be able to give back the correct readings, causing the engine to run a lean or rich mixture, neither of which is optimal for power.

The fuel pumps that feed the injectors can also go bad over time. This is a common problem in older vehicles, where the fuel pump is susceptible to electrical problems because of its exposure to the elements. Dirt or sediments from low-quality fuel can also block the fuel pump. Some fuel pumps are a pain to remove and install

Your car’s engine is like a living creature, in the sense that it needs to breathe properly; this ensures that the combustion process is sustained for as long as the engine is running.

And just like how you would be given to coughing fits whenever you breathe in impure air or your air passages are blocked, so does the engine struggle to perform when not enough air is coming in.

This is probably one of the easiest to address as far as air intake goes because the air filter is simple to remove and replace. The filter traps environmental contaminants such as dust and dirt that the engine sucks in through the radiator, impurities that can potentially interfere with the proper combustion of fuel inside the chamber.

After several thousand kilometers though, especially in areas where heavy air pollution is common, the filter becomes clogged with these impurities. As the engine struggles with getting enough air into its chambers, performance is compromised. Animals can take up residence inside your car's air filter, which is why you should regularly check them

>>> You might want to read: Replacing car air filter: Must-have skills that every Filipino driver needs to know.

Another way that your engine loses power is when the exhaust system is either too tight, which causes the engine to exert more effort in pushing out exhaust gases, or there is a leak somewhere, which results in loss of compression.

If you suspect that your car’s engine isn’t performing as well as it should be, you can start by listening to how your engine runs whether at speed or during idling.

You can then confirm this with an ocular inspection on the underside of your vehicle. Repairing these issues requires the necessary technical know-how, so it’s best to take it to a competent mechanic who can determine the best approach. Some components can be repaired through welding, but others will need to be replaced outright

The best way to prevent these things from happening to your engine in the first place is with regular maintenance. Having your oil changed regularly removes impurities that have been trapped by the oil filter, as well as keeping the metal parts that come into contact with each other properly lubricated.

The fuel and air filters also need to be replaced within their own respective intervals. It’s better to bring your car to shops or professional garages equipped with a lifter, as this enables visual inspection of the car’s under chassis for leaks and damage on its exhaust system, among other things.

Sure, these things take money and effort, but the little you spend now will save you from having to spend a lot in the future when bigger problems arise.

For more maintenance tricks, refer to our car tips and advice.