Camaro vs Mustang: A specsheet battle of two long-time rivals

In the Philippines, there is none more heated than the Camaro vs Mustang rivalry. Read on the comparo to find out which is a better entry-level muscle car.

If you want to open a large can of worms among muscle car guys, ask them which is better: a Mustang or a Camaro. How so? Well, these guys are so passionate about brand loyalty, that a staunch Ford guy wouldn’t dare touch a Camaro with a ten-foot pole.

The same goes for a Chevy fan when it comes to a Mustang (or any Ford vehicles for that matter). It simply boils down to the history between these two brands, starting in the 1920s where Chevy outpaced Ford for the first time in sales, to World War II and NASCAR. Even today, car guys from either side of the coin would sometimes seek each other out during car meets and events to exchange jabs over each other’s choice. Here in Philkotse.com, we’d rather compare the Camaro vs Mustang with a more objective point of view…a spec sheet battle. Not to take sides here, as we haven’t really been exposed firsthand to the Ford and Chevy rivalry, but we just can’t help comparing these two long-time rivals against each other, especially as there is a niche group of muscle cars owners in the Philippines.

Do note though, that the more powerful variants of the Camaro have not been made available on our shores. As such, we will be pitting the 2020 Chevrolet Camaro 20 L Turbo LT RS against the Ford Mustang 2.3 L EcoBoost Premium.

While styling is always in the eye of the beholder, we appreciate the effort that Ford has put into incorporating the classic Mustang into the current iteration. It’s a retro-modern beauty that definitely pays homage to the models that came long before it, and we really like storied car models that have a rich heritage.

In comparison, the Chevrolet Camaro has become radically different from its predecessors, sporting modern looks. The Chevy is still a good looking car though, with sleek lines and angular corners. The fastback configuration is especially eye-catching. The Ford Mustang 2.3 L EcoBoost on the other hand still has that classic prowler look of the 70s-era Mustang.

Both cars are two-door coupes with limited space on the rear seats. In terms of size, the Camaro is a bit smaller than the Mustang, yet has a longer wheelbase though. So who's better looking from behind? The Camaro? >>> Click here for the expert review of Ford Mustang models.

3. Camaro vs Mustang: Interior and Convenience

As far as the interior is concerned, both the Camaro and the Mustang provide front cabins that are well-laid out. The Ford coupe has an abundance of round shapes, including the AC vents in the middle. On the Camaro, things get a bit more angular, but otherwise, its AC also uses round vents.

Another thing we noticed is the number of hard plastics inside the Chevy, in contrast to the Mustang. The Camaro's infotainment system is also much more prominent on the dash, while the Ford Mustang is a bit recessed and is positioned closer to the shifter. Both the Camaro and the Mustang have leather on the seats, dashboard, center console, and shift knob. We like the nice and round AC vents aboard the Mustang

When it comes to on-board tech, both the Camaro 2.0 L and the Mustang 2.3 L come loaded as well. They both come with power-adjustable front seats, tilt and telescopic adjustment on the steering wheels, and 8-inch touchscreen units that offer similar connectivity functions.

One caveat is that Ford’s SYNC 3 has some difficulty with Apple CarPlay. Chevrolet's MyLink might be a bit better in this regard, being a considerable improvement from previous versions. The Camaro even has twice the number of circular vents

Talking about space, both have comfortable quarters for the front occupants. But the rear seats are a different story, likely better suited to small children than adults. In terms of cargo capacity, the Mustang leads at 323 liters, 65 more than the Camaro’s 258. Both rear seats on these coupes are also foldable, which expands the trunk space considerably.

>>> Suggested car comparison of other vehicles in the same segment: Toyota 86 vs Subaru BRZ: Who's the King of Speed?

At 310 horsepower and 475 Nm of torque, the Mustang’s entry-level 2.3 L packs more power than the 2.0 Camaro's 275 horses and 398 Nm of pull. However, the Chevy muscle car can count on a stable of more powerful siblings in international markets. There’s the 455 horsepower Camaro SS that competes against the 460 horsepower Mustang V8 GT.

There’s also the monstrous 650 horsepower ZL1 Camaro which outguns the Mustang Shelby GT350. To counter Chevy's onslaught, Ford is reportedly developing a 760 horsepower GT Shelby 500, expected to come out in 2020. For now, Ford offers in-house tuning, another advantage for the Mustang line.

While both models come with rear-wheel drive, the Ford Mustang 2019 has two more cogs than the Camaro’s 8-speed AT, making the Ford better at top speed runs on the highway. A six-speed option is available as well for the Ford, which may not sound much, but was reportedly fun to play around with on the track. Despite being more powerful, the Mustang is also much more fuel-efficient than the Camaro, since the EcoBoost inline-four can actually use regular gasoline. The Camaro, on the other hand, runs on premium 91 to 94 octane. However, that only holds true in the United States. For the Philippine market, both cars have no problems regarding the kind of fuel that they use because our regular gasoline here already has an octane rating of 91.

Where handling is concerned, the Mustang has a reputation for being rather difficult, especially for newer, inexperienced drivers. That might ring true in a sense, even with the base 2.3 L Mustang variant, but at least it comes with an optional high-performance package and a handling package.

As for the Chevrolet Camaro 2019, the ride might not be as comfortable as the Mustang for daily use, but its stiff suspension and near 50/50 weight distribution does wonder at the track. And as one Reddit user put it, the Camaro is equivalent to a modern-day Nissan 180SX. If that isn’t high enough praise for its handling, we don’t know what is. The Camaro 3LT RS can make for a great drift car platform, if you cough up the dough

Another area where the Mustang shines is with its wealth of driver-assist features. While it’s pretty even against the Camaro in terms of airbags, the Mustang has Autonomous Emergency Braking which activates if the car senses that you’re approaching something or someone on too fast a speed, and it has a forward collision warning which of course will scream at you before activating the autonomous braking feature. 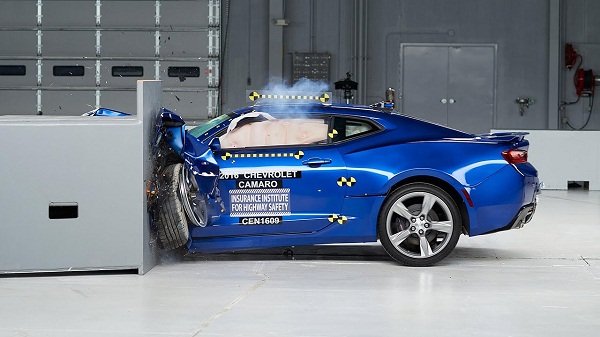 Chevy Camaro got 5-star for the crash test

As for regular stuff like ABS, EBD, traction, stability control etc, each of these muscle cars come standard with those just like any modern high-performance vehicles available today.

>>> For more affordable car deals available in the Philippines, please refer to the Cars For Sale section.

>>> View full price list and installment of the Chevrolet Camaro

>>> Get full price list installment of all Ford Mustang variants

The Mustang scores points with its superior power and safety features, along with a cheaper base variant and wider choice of trims, although we hope for the 2.3 L Mustang with the five-speed manual, as well as the manual version of the GT Fastback.

As it stands, the only variant that has a stick shift is a convertible; who buys convertibles with a climate like ours? Even the Camaro lacks a manual variant, and we likewise wish that either of its manuals manages to reach us here in the Philippines in the future. The Chevrolet cars have a lot of potential for autocross and drifting for instance, and many car guys do prefer a manual transmission for those.

Overall, the 2.3 L Ecoboost Mustang has more to offer specs-wise over the Camaro, but that's not to say that we don't appreciate the latter's sporty and agile character, as they definitely have their merits on a race track. Are you on Ford's side or are you rooting for Chevy? 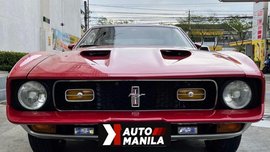