Mitsubishi Xpander: How does it stack up against its rivals?

Those in the market for a compact MPV should check this out.

Launched in the Philippines back in 2018, the Mitsubishi Xpander has since become a household name when it comes to seven-seater compact MPVs. Its sleek, modern looks and roomy interior has captured a lot of attention. Currently, it’s one of the desirable family cars with a price tag that won’t break your wallet. As a seven-seater MPV, the Mitsubishi model has a lot of rivals in the local market. Among these are Toyota’s Avanza and Rush models, Honda’s Mobilio and BR-V, and the Suzuki Ertiga. This begs the question: how does the Mitsubishi Xpander fare against these models in terms of specs? Let’s find out.

Under its hood is a 1.5-liter inline-4 gasoline engine that’s capable of producing up to 103 horsepower and 141 Nm of torque. The entry-level Xpander GLX variant gets a five-speed manual transmission, while the rest uses a four-speed automatic transmission. For keeping its occupants cool, it uses a manual air-conditioning system with rear vents, and it also comes standard with fabric seats. The driver also gets a tilt and telescopic steering wheel, and cruise control.

For entertainment, the Mitsubishi-made MPV either gets a 2-DIN headunit, or a seven-inch touchscreen with Bluetooth and iPod connectivity. On the top-spec Xpander GLS, the said headunit is linked to six speakers.

Safety is then handled by two airbags, anti-lock braking, ISOFIX child seat tethers, among others.

Within the Toyota lineup, the Xpander’s closest, similarly priced rival is the Rush. Mechanically, the Rush differs a bit since it uses half a ladder frame, and half a monocoque chassis. It also uses a front-engine, rear-wheel-drive layout in contrast to the Xpander’s front-wheel drivetrain. 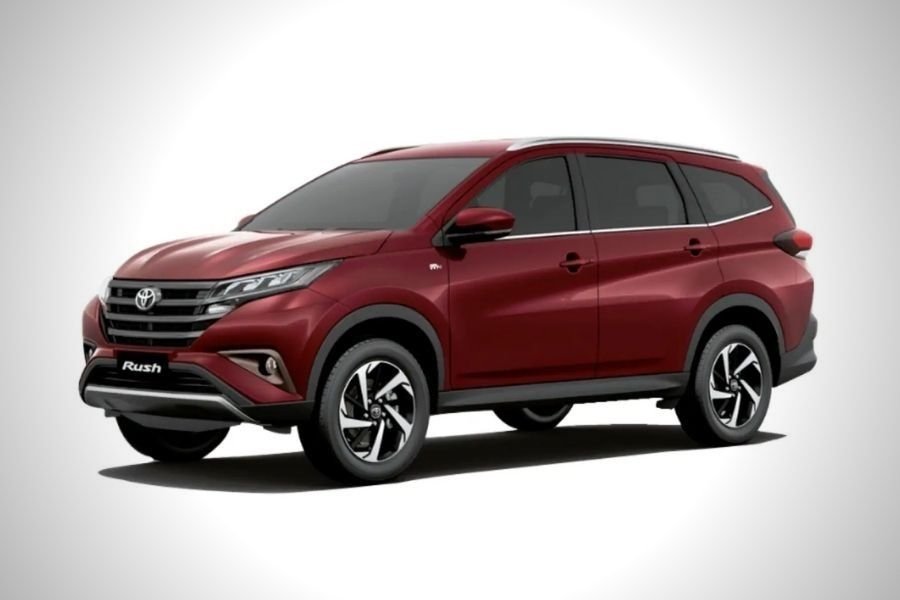 Similar to the Xpander though, the Rush also uses a four-speed automatic transmission or five-speed manual gearbox. Moreover, the Rush comes with a 1.5-liter inline-4 gasoline mill, which makes a total of 102 horsepower and 134 Nm of torque. On that note, there are marginal differences when it comes to these two’s engine outputs.

With regards to interior features, the Toyota-made MPV also has a tilt-and-telescopic steering wheel, but its high-spec variants come with an automatic air-conditioning system which the Xpander lacks. The top-spec Rush G also has a seven-inch touchscreen with two more speakers than the Xpander GLS. Lastly, the top-spec Rush G also has a more comprehensive safety kit than the Xpander GLS. To be specific, it comes with seven airbags, whereas the Mitsubishi model only has dual-front airbags. Apart from that, the Rush also has stability and traction control, speed-sensing door locks, and hill-start assist. Those features are not present on the Mitsubishi MPV. Both models however, do come with anti-lock braking, ISOFIX child seat tethers, and a security alarm.

As for pricing, the Rush’s entry-level manual variant is priced at Php 983,000, while its top-spec model’s price sits at Php 1,100,000. It currently has three variants in the local market.

When comparing the Mitsubishi Xpander vs the Toyota Avanza, the story remains the same. This is because the Avanza uses the same platform that the Rush uses. That means it also has a front-engine, rear-wheel-drive setup. For that matter, it is also a five-door compact MPV, with a seven-seater capacity (save for the five-seater entry-level variant). To sum it up, it is smaller but taller than the Xpander. It also has less ground clearance compared to the Mitsubishi model due to its rather prominent rear axle.

When it comes to engines, the higher-spec Avanza Veloz and G variants come standard with a 1.5-liter inline-4 gasoline engine. This engine can produce up to 103 horsepower and 136 Nm of torque. Like the Xpander’s automatic versions, this Toyota-made MPV also has a four-speed automatic. Its manual version also uses a five-speed manual gearbox.

The more affordable Avanza versions like the Avanza J and E however, use a smaller 1.3-liter mill. At most, this smaller engine can make 95 horsepower and 121 Nm of torque, which is of course far less than what the entry-level Xpander makes. Also, do note that the Avanza 1.3 J variant is a five-seater model. Inside the Toyota Avanza

Like its Mitsubishi-made competitor, the top-spec Avanza Veloz is equipped with a manual air-conditioning system. It also sports fabric seats, but its steering wheel is only tilt adjustable. Its 6.8-inch touchscreen however, is linked to a four-piece speaker system, which is four less than the one on the Xpander.

Safety-wise, the Avanza Veloz is similar to the Xpander GLS as it also has anti-lock braking, ISOFIX, etc. It also lacks stability control, and hill-start assist that are present on the Rush.

When comparing the Mitsubishi Xpander vs the Suzuki Ertiga in terms of size, it is obvious that the latter is smaller. To be specific, all variants of the Ertiga measure at 4,395mm long, 1,735mm wide, and 1,690mm in height. For that matter, its wheelbase is also shorter at 2,740mm, but its ground clearance is only marginally less at 180mm. As for what’s under the hood, the Ertiga uses a 1.5-liter inline-4 gasoline engine. It can make up to 103 horsepower and 138 Nm of torque, which is identical to the output of the Avanza. While it has less torque than the Xpander, the difference is marginal.

Like the Mitsubishi model, the Suzuki-made MPV also uses a four-speed automatic or five-speed manual depending on the variant.

The interior amenities of the Ertiga are also quite similar to the Xpander. Its top-spec model has automatic air-conditioning, while the rest has manual air-conditioning. Its eight-inch touchscreen is far larger than the one on the Mitsubishi-made MPV. Safety-wise, both the Xpander and Ertiga are on par as well. Both come with anti-lock braking, and dual-front airbags.

While the Mobilio was discontinued recently, people still want to compare the Xpander with the aforementioned model. On that note, both have similar layouts, in that they’re both front-engine, front-wheel-drive vehicles. If you compare the Mitsubishi Xpander vs the Honda Mobilio when it comes to size, the former is the larger vehicle. That’s because the Mobilio is 4,398mm long, 1,638mm wide, and 1,603mm in height. Its wheelbase is also shorter at 2,652mm, and it also has less ground clearance at 189mm. The seven-seater Honda is more akin to a wagon than an MPV as it is based on the Brio.

As for engines, the Mobilio uses a 1.5-liter mill that can churn out 118 horsepower and 145 Nm of torque. It has a bit more horsepower than the Xpander, but the difference in torque is negligible. Moreover, the Mobilio uses a continuously variable transmission in contrast to the torque converter that the Xpander uses. It does have a manual variant, which uses a five-speed manual gearbox. Inside the Honda Mobilio

When it comes to interior amenities and safety, it isn’t that much different than the Avanza and Ertiga. It has a tilt-only steering wheel, manual AC, and fabric seats. Safety for this Honda model is also handled by dual-front airbags and anti-lock braking. It does have stability control, which the Xpander GLS lacks.

When it was available brand new, the Mobilo’s price ranged from Php 895,000 to Php 1,085,000. This made it slightly less expensive than the Mitsubishi Xpander. In comparing the Mitsubishi Xpander vs the Honda BR-V in terms of size, the Mitsubishi is marginally longer and wider. Then again, the BR-V is a crossover, and so it has more ground clearance at 201mm. Its wheelbase is shorter than the Xpander at 2,662mm.

Under the hood, the BR-V uses a 1.5-liter inline-4 gasoline mill. At most, this four-banger can produce up to 118 horsepower 145 Nm of torque. So as with the Xpander vs Mobilio comparison, the BR-V produces slightly more torque. All variants of the Honda crossover use a CVT.

In terms of interior, the top-spec BR-V V offers a lot more than the Xpander. It has leather seats, and automatic air-conditioning. Its seven-inch touchscreen is also larger, and it also has Apple CarPlay and Android Auto. Then again, it has fewer speakers numbering at four. Safety-wise, the BR-V isn’t that far off from the Xpander’s kit. It has dual-front airbags, and anti-lock braking as well. Then again, the said Honda model also has hill-start assist and stability control, which is absent on the Xpander GLS.

Sitting in as the Xpander’s top-spec model is the Xpander Cross. Size-wise, it is larger than the regular Xpander with its length of 4,500mm, width of 1,800mm, and height of 1,750mm. It however, has an identical wheelbase length of 2,775mm since it uses the same platform. As a raised version of the Xpander, it features more ground clearance at 225mm. Just like the normal Xpander, the Xpander Cross uses a 1.5-liter engine. It produces the same output at 102 horsepower and 134 Nm of torque. It also uses the same four-speed automatic gearbox which sends power to the front wheels.

As for its interior, it is identical to the Xpander GLS. It has a manual AC like the regular Xpander, and the same identical headunit. As for safety though, it offers more with its active stability control, traction control, and hill-start assist. On top of that, it also has dual-front airbags, anti-lock braking, ISOFIX, among others.

The Mitsubishi Xpander Cross sits as the top-spec Xpander variant and it has a price tag of Php 1,255,000.