Complete Guideline on Driver License Suspension Appeal in the Philippines

The article will be a complete guideline on driver license suspension appeal in the Philippines.

Let's imagine living in a country with over seven thousand islands, separated by natural barriers! Perhaps, the easiest way to visit adjacent islands is through driving.

Driving is undeniably fun - it let you set your foot from peripheries to centers of the country. But this presupposes that you are armed with a valid driver’s license. And when we say valid, that means your driver’s license is neither suspended nor revoked.

Suspension of driver’s license in the Philippines may be caused by various reasons. The period of suspension and the mode of appeal to such suspension also vary, depending on the type of license used by the driver (whether student, professional, or non-professional). 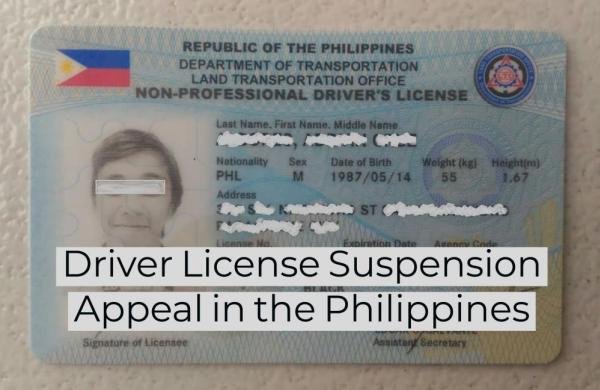 Prevention is better than cure. Equipping yourself with vital knowledge about driver license suspension is a must to avoid getting involved into unnecessary troubles. However, what if your license has already been suspended?

No worries! In this post, Philkotse.com will provide essential information about driver's license suspension appeal in the Philippines, which will be helpful in case you unfortunately get your driver license revoked.

I. LTO holds the exclusive authority in revoking and suspending a license

By virtue of the aforesaid law, the Land Transportation Office (LTO) Commissioner, by virtue of the power granted by Section 27 of RA 4136, does not only focus on issuing a license, but also has the exclusive authority and power to and revoke or suspend it for causes against traffic rules and regulation. This power may also be delegated to LTO deputies, who are authorized to suspend any driver’s license, provided that the suspension would not exceed for three (3) months. However, if the driver violated any provisions of RA 4136, regulations that may be issued by the Commissioner or municipal ordinances relating to traffic rules and regulations, at least three times within a year, a suspension of not more than two years is applied.

The action made by any deputy may be appealed to the Commissioner of LTO, who may either modify, reverse, or confirm the suspension. In case of revocation or refusal to reinstate the revoked license by the LTO Commissioner, the affected individual may appeal it to the Secretary of Public Works Communication.

For example, for first offense colorum violation, the suspension of license and plate number of vehicle shall be lifted after three (3) months. In some cases, requirements for lifting of suspension included serving accessory penalties (e.g. driver is asked to attend seminar or examination). Colorum vehicle is a common violation in the Philippines

Driver’s license reinstatement by the Commissioner or his deputy may be done by furnishing the required bond of one thousand pesos. The payment of bond is without prejudice to the satisfaction of any claim that may be filed against the driver.

On top of this, the Commissioner should be satisfied that the driver may have a safe driving again with his vehicle, in order that the license be reinstated. On the other hand, a different mode of appeal is taken when the driver is apprehended and at the same time the license is suspended, pursuant to Joint Administrative Order no. 2014-01.

Under this regulation, the following are offenses in connection with licensing: failure to carry his driver’s license, failure to wear the required protective helmet, reckless driving, driving without license, and other similar violations.

In case the penalty of apprehension or suspension cannot be implemented right away, the LTO usually put the motor vehicle or driver’s license on alarm.

Thereafter, the officer-in-charge will issue a Temporary Operator’s Permit (TOP) in favor of the driver. The TOP also answers how to check driver’s license status as it indicates that the permit is valid for a non-extendible period of 72 hours or three days. The driver is given five days to contest the validity of the apprehension or confiscation of driver’s license, otherwise his/her case shall be deemed admitted. The permit issued by LTO should only last for 72 hours

4. The location of the apprehension

It should be noted that the place in settling apprehension cases vary depending on the location of his apprehension. If the apprehension took place in Metro Manila, he will appear before the Traffic Adjudication Service (TAS) of LTO. On the other hand, if the apprehension took place in some other LTO district or regional offices, the place of settlement shall be indicated at the issued TOP to the driver. In either case, the following steps should be taken by the driver:

Follow Philkotse.com to learn new and useful driving tips to stay safety behind the wheel!