The tech-heavy SUV replaces the XC90 as the automaker’s flagship.

Swedish automaker Volvo has unveiled the EX90 electric crossover for the 2024 model year. This is the first bespoke battery electric vehicle (BEV) for the brand, replacing the XC90 as its flagship SUV.

“The Volvo EX90 is a statement for where we are, and where we are going,” said Volvo chief executive Jim Rowan. “It’s fully electric with a range of up to 300 miles (483 kilometers) on a single charge, designed to further raise our safety standards, the first Volvo car to be truly defined by its software and part of a wider ecosystem, connecting to your home and your other devices. The Volvo EX90 is the start of something new for Volvo Cars in many ways.”

Unveiled in Stockholm, the Volvo EX90 will be built in the U.S. by 2023, with production to also commence in China at a later date. Volvo aims for the two production facilities to be climate-neutral.

The EX90 echoes the clean lines of Volvo’s Scandinavian design roots, governed by the principle of form following function and previewed on the Concept Recharge. Its fascia is dominated by the carmaker’s insignia, flanked on either side by segmented LED headlamps arranged in a ‘Thor’s hammer’ configuration, accompanied by vertical LED fog lamps cascading down the front bumper. The Volvo EX90's design was previewed by the Concept Recharge

A strong character line traverses the profile from the hood all the way to beyond the D-pillar at the rear, complemented by a prominent indentation on the doors that feature flush door handles. The black contrast roofing not only exudes sportiness but also houses the front-facing lidar sensor just above the windshield. A smooth profile leads to a distinct lighting signature out back

At the rear, C-shaped LED tail lamps frame the Volvo wordmark set right at the center of the chiseled tailgate that features what looks like a camera and sensor setup built into the sheet metal. The rear glass is then surrounded by auxiliary brake lamps. Together with the 22-inch five-blade aero wheels, the EX90’s design boasts a drag coefficient of 0.29 Cd, which according to Volvo is very competitive for a large SUV.

Inside, the EX90 offers space for up to seven occupants, in a layout largely shared with the Polestar 3. Contoured seats throughout offer optimum support, while a panoramic glass roof overhead provides plenty of opportunities for ambient light to enter the cabin during daytime drives. Cabin volume closely matches that of the outgoing XC90, with legroom at the front, middle, and third rows measuring 1,039mm, 927mm, and 810mm, respectively. In further support of sustainability, the EX90’s seats are dressed in a wool-blend fabric and other textiles made from recycled plastic bottles. Backlit trim pieces comprising FSC-certified wood are also present, and even the carpets are made from recycled materials. Seats are made from recycled materials

The minimalist dashboard is notable for doing away with physical buttons and switches in favor of a dual-screen display, where most vehicle functions can be engaged.

As Volvo’s new flagship SUV, expectations are high that the EX90 will be a tech showcase, and it doesn’t disappoint. A floating widescreen digital instrument cluster behind the steering wheel is accompanied by a large 14.5-inch portrait-oriented central display, the latter powered by Google’s Android Automotive OS while offering compatibility with wireless Apple CarPlay. The core system runs on a combined computing powerhouse comprising the Xavier and Orin AI platforms by Nvidia Drive, Snapdragon Cockpit Platforms, and in-house software developed by Volvo engineers. These govern the various functions of the EV, from safety and infotainment to battery management. Visualization capabilities are handled by the Unreal Engine 3D tool developed by Epic Games.

Standard 5G connection enables apps to be easily installed as well as receiving over-the-air (OTA) updates, while multimedia streaming is made more enjoyable with the new, reference-quality Bowers & Wilkins audio system featuring Volvo’s first use of Dolby Atmos across 25 speakers. Another standard feature is phone key technology, enabling users to simply bring their smartphones to unlock the car. 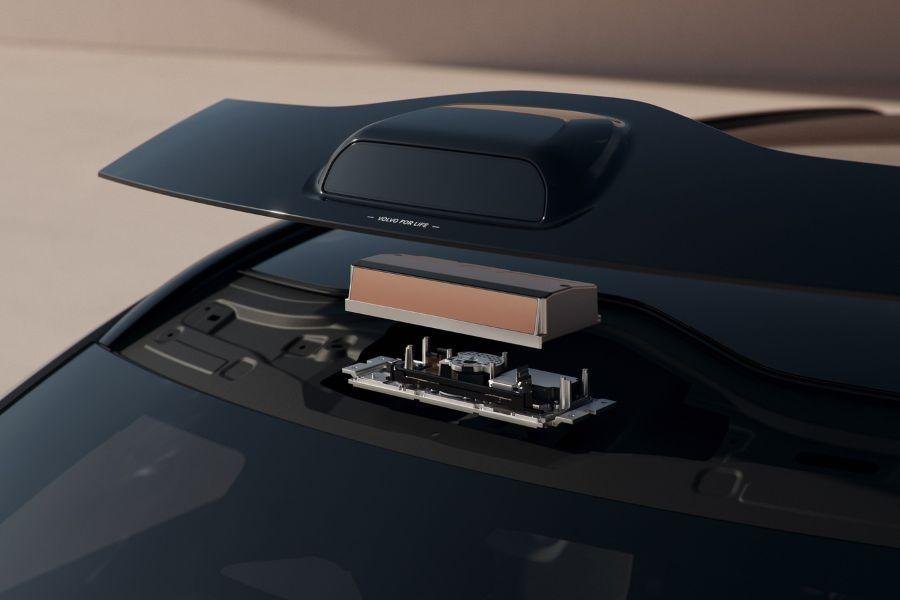 Two electric motors aboard the EX90 are powered by a 111-kWh battery, delivering 496 horsepower and 910 Newton-meters of torque. All-wheel-drive is standard, and the EV can travel 483 kilometers on a single charge. The EX90’s onboard charging system can top up the battery from 10 to 80 percent in 30 minutes. Acceleration from zero to 100 kilometers per hour takes only 4.7 seconds Volvo says that the EX90 is capable of bi-directional charging

The EX90 is also Volvo’s first car to support bi-directional charging, enabling users to use the EV as an emergency power supply in case of power outages or even to recharge a compatible EV.

Volvo says that the 2024 EX90 electric SUV will be available under $80,000 (Php 4.65 million). Customers placing pre-orders will have the opportunity to configure their preferred specifications by late 2023 and will be prioritized when deliveries commence in early 2024. The Volvo EX90 will initially be manufactured in the U.S.