The 2017 Toyota Hilux Revo is expected to monopolize Thai market in Q3 2017.
The 2016 Toyota Hilux Revo was introduced at Thai Motor Expo in December last year. This year, 2017 model is speculated to debut in Q3 with similar design as the outgoing version. However, Toyota will provide a Deckless option for the Standard Cab (Single Cab). According to the manufacturer, the 2017 Standard Cab will come with new features including LED high-mount stop lamp, chrome front grille, chrome side mirrors with power adjustment and integrated turn signals along with chrome door handles, electric windows. In addition, the pick-up truck is also furnished with 2-speaker audio system with CD, AUX/USB port and Bluetooth, ABS with EBD and driver, passenger and knee airbags.

The 2017 Standard Cab will come with new features
Toyota’s customers can take options among one petrol and three diesel engines. The petrol engine is a 2TR-FE 2.7-litre Dual VVT-i 4-cylinder engine pushing out 164hp and 245 Nm of torque, coupled with a 5-speed manual transmission.
>>> Related: View more options for Toyota Revo 2016 for sale 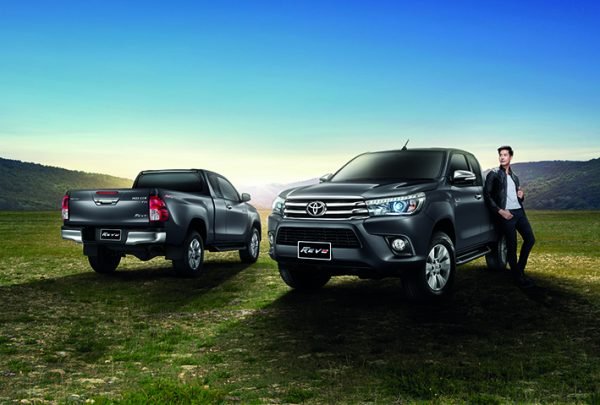 Toyota’s customers can take options among one petrol and three diesel engines
Meanwhile, three diesel engines contain a 2.4L 2GD-FTV 4-cylinder unit with 148hp and 343 Nm of torque and a 2.8L1GD-FTV 4-cylinder engine producing 170hp and 343 Nm of torque. In both two engines, power is fed to the wheels via a 5-speed manual transmission. Lastly, a 2.8L 1GD-FTV is the most powerful one which can deliver 175hp and 420 Nm of torque. Particularly, this unit of the Toyota Hilux is the only engine mated to a 6-speed manual gearbox.
2017 Hilux Revo Exterior & Interior