The Crown wasn’t that fast, but it sure was stylish.

If you’re paying close attention to the automotive industry, then you’ll know that Toyota is one of the largest car brands in the world. In fact, Investopedia.com says that the Japanese carmaker is the ninth biggest company in the world right now, with a revenue of 278 billion USD (around Php 13 billion) for the 2019 fiscal year.

Why are we talking about Toyota Motors? Well, the car we’re going to talk about runs deep into the said company’s roots. In fact, it’s the first-ever Toyota vehicle that was exported to the U.S., thus helping the company grow into the global powerhouse that it is today. It also proved that importing a Japanese made car made sense, and without it, the company might have kept more Toyota models within the Japanese market. A Toyopet Crown being lowered from a cargo ship

It’s also the longest-running Toyota nameplate ever, and it’s been around since 1955. It’s called the Toyota Crown, and for a short while, this luxurious sedan was sold in the Philippines from 1988 to 1998.

Before it arrived in the Philippines, the Crown nameplate was already a veteran. Back when it was first introduced, it was known as the Toyopet Crown. “Toyopet” was the initial name for the SA, Toyota’s first-ever car. Then it became a sub-brand of sorts for Toyota’s small vehicles. That said, the first-gen Crown was also tiny, and it very much looked like a miniature version of the American cars that were popular around the world in the 1950s.

It was, however, a simple, economical, and practical car that catered to a market segment similar to that of the more modern Toyota Corolla, Toyota Wigo, and the Toyota Vios. The 1st-gen Crown was small, affordable, and practical

Of note, the first-generation Crown was also the first Toyota to be introduced in the American market. It proved that Japanese-made cars could do well as imports. As such, it can be argued that the Toyota Crown paved the way for Toyota’s massive presence in the global automotive industry.

Following the success of the first-generation Crown, Toyota followed it up in 1962 with the second-generation version. The aforementioned generation also received the now-famous Toyota Crown Eight.

This variant, however, was only available in Japan, but unlike its low-powered, gas-thrifty brothers, this one came with a 2.6-liter V6 engine. Sure, it only made 112 horsepower and 196 Nm of torque, but the Crown Eight was the most powerful and most luxurious version of the Crown during that time. Fast forward to the 1970s and the fourth-gen Crown entered its phase where it was inspired by muscle cars. Its international variants came with four round-shaped headlamps and an aggressive stance. Toyota even released a sporty coupe version. This style for the Crown was especially prevalent in Australia and the U.S. as it had struck a perfect balance of style, economy, and practicality.

Subsequent generations however were more luxurious and stately looking. Case and point is the fifth-generation and the sixth-generation versions. They all grew in size and they also had the equipment to fulfill the role of an executive sedan.

The sixth-generation was of course most notable in this regard since it was one of the first Toyotas to come with automatic climate control. Also aboard the sixth-gen Crown was a mini-fridge, a vinyl padded roof, cruise control, and an electronically adjustable driver’s seat. Back in the late 1970s to the early 1980s, these features were the pinnacle of comfort. The 4th-gen Crown is aggressive looking

A year after its global debut, Toyota brought the eight-generation Toyota Crown to the Philippines. From 1988 to 1992, there were two variants available. The entry-level one was the Crown Deluxe, and it was propelled by a 2.2-liter SOHC inline-4 gasoline engine. Considering its size and weight, the engine was a bit underpowered as it only made only 97 horsepower. What power it made was sent to the rear wheels via a five-speed manual. 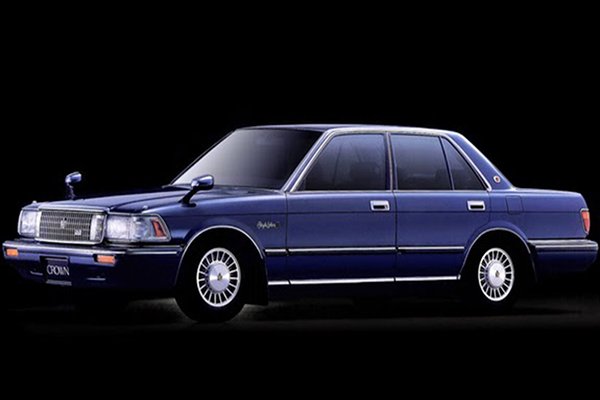 The second variant for the initial local release was the Crown Super Saloon. Under its hood is a 2.8 SOHC inline-4 gasoline mill delivering 116 horsepower and 196 Nm of torque to the rear. A five-speed manual gearbox and a four-speed automatic were available for this variant.

In 1993, the Crown ditched the old carbureted engines in favor of electronic fuel injection. On top of that, it also acquired a facelift. From that point until 1998, two variants were available. There’s the Crown Super Saloon, which uses a 1G-FE DOHC 2.0-liter inline-4 gasoline engine. The said engine can churn out up to 135 horsepower and 176 Nm of torque. That of course is a vast improvement over the old entry-level variant.

The best Crown variant that we received however was the Crown Royal Saloon. And in “best” we mean that it was the most powerful and the most luxurious. Powering it is the 6M-GE 3.0-liter DOHC inline-6 gasoline engine capable of making up to 190 horsepower and 260 Nm of torque. It was, however, only available with a four-speed automatic. The 8th-gen Toyota Crown after the facelift

Despite the significant power output, the Crown Royal Saloon wasn’t a sporty car. Its curb weight after all was around 1,425 kg, so all its horses really needed to work to propel it. It can, however, keep up with the V6 Camry somehow. It was also a smooth-riding sedan. Its ride quality was even comparable to that of the BMW 5 Series, the Mercedes Benz E Class, and Volvo 850 versions during that time. The Crown, however, was significantly cheaper to acquire and maintain than the aforementioned cars.

Like its competitors, the Crown Royal Saloon had a significant road presence as well as a decent array of creature comforts. It had electronically adjustable front driver and passenger seats, as well as a beverage cooler, a six-speaker sound system, and dual air-conditioning with rear controls. 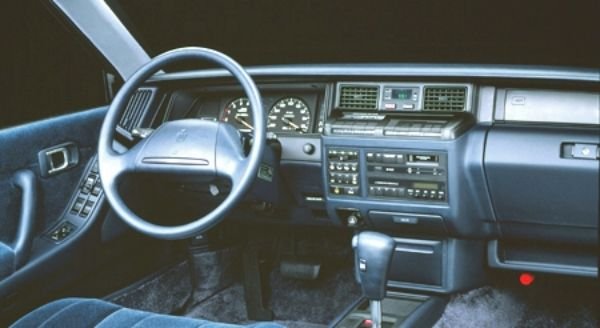 Inside the 1993 Toyota Crown Royal Saloon

After a decade, however, local sales for the Toyota Crown began to slow down. More alternatives had popped up even within the Toyota local model-lineup at that time. As such, Toyota PH decided to stop selling the Crown in 1998.

Toyota Crown: The incredible ones we didn’t get

After being discontinued for the Philippine market, the Crown still did well in its home market, as well as in Europe, New Zealand, Indonesia, Australia, and eventually China. Even the U.S. didn’t get the newer generations of the Crown.

In other parts of the world, Toyota introduced an eighth-gen Toyota Crown variant powered by the 2JZ-GE inline-6. The said engine is of course the same engine found on the non-turbo versions of the Toyota Supra from the first-generation version until the legendary Supra Mark IV. On the Crown, the 2JZ-GE inline-6 made 218 horsepower and around 283 to 298 Nm of torque. That said, it was a non-turbo version of the 2JZ engine. The Crown was also fairly heavier than the Supra, so like its earlier versions, it was meant to ride smoothly and gracefully.

The Crown nameplate used the 2JZ series of engines until Toyota introduced the twelfth-generation Crown that primarily used the GR series engines.

Another Crown that’s beyond our grasp is the current fifteenth-generation version. It’s still a four-door sedan, but it now uses the Toyota New Global Architecture GA-N. It no longer has the 2JZ-series inline-6 instead it uses a 2.0-liter inline-4, and two more powerful hybrid systems.

It’s also full to the brim with high-tech features that mostly cater towards providing health and safety. Yep, we’re talking about a 24/7 e-Care Health Check Report system, an e-Care Driving Guidance system, as well as the Helpnet system which contacts emergency services in the event of a crash. With all of that said, the Toyota Crown is the car that launched Toyota into the mainstream. If it wasn’t imported to the U.S. and made a killing there, Toyota’s global presence might have turned out to be different than what it is today. Why? Because the Crown proved that Japanese cars can compete against the European and American made sedans. So, do you want the Crown to return to the Philippines?

If you enjoyed this article, keep reading here on Philkotse.com for more.