Below is our list of 10 must-see films for car enthusiasts. How many of them have you watched?
When it comes to action movies, especially ones produced by American directors, we can't help but recalling breathtaking chasing scenes of speedy racing cars. It is undeniable that cars in films have always played an significant storytelling role in cinema. Nothing can be more exciting than enjoying a movie with a collection of fast autos and high speed chases.

Below is our list of 10 must watch films for car enthusiasts. While this article might not include all car movies, it does feature the most worth-watching ones. Make sure you have seen at least 5 of them!

A scene from Ronin (1998) movie
Ronin, the American spy action-thriller movie produced in 1998, is surely the first film in every car addicts’ bucket list.

The star cast of Ronin includes Jean Reno and Robert DeNiro. The film is about a team of international ex-special operatives joining together to steal a highly guarded and mysterious briefcase away from a very rich and powerful man. You are certainly in for a visual treat as Ronin is surely your go-to destination to see all your favorites movie stars zoom in through the roads of Nice and Paris. Cars that are featured in the movie's chase scenes include the Audi S8, Mercedes Benz 450 SEL, BMW 535i, and Peugeot 406.
Hey guys, if you don’t trust our words, head over to your one-stop movie shop, grab a DVD and give it a watch.

A scene from Gone in 60 Seconds (2000) movie
Gone in 60 seconds is particularly an American action heist drama released in 2000.

The movie includes a star cast of Angelina Jolie, Delroy Lindo, Nicolas Cage, Giovanni Ribisi. The film centers on a retired master car theft who is forced to come back to the industry and steal 50 vehicles with his crew in one night to save his brother’s life.

Few of the dream cars used in the film include names of Lamborghinis and Aston Martins. Say Gone in 60 Seconds to car lovers now and the very first thing will pop up in mind is a 1967 Shelby GT500, thanks in part to this movie, which is a remake of the 1974 low-budget action hit.
Gone in 60 seconds - Final Chase

Driven (2001) features some very cool driving
Driven (2001) is not really the masterpiece it was released as at the time, but it is quite a fascinating movie.

The movie is about a young hot shot driver’s effort to win the Champ Car World Series auto racing championship. If you've watched this movie, you would agree with us that the director of this film knows well how to shoot violence. Driven (2001) features some very cool driving. Critics views are mixed but the film, overall, is quite good so it is definitely worth a watch if you have not yet seen it. What is more, the soundtrack is cool.
DRIVEN (2001) - The infamous race through Chicago between Stallone and Pardue In the second sequel onwards, the Transporter movie focused on the Audi A8
Much like the Fast & Furious, the Transporter franchise (2002-2008) got progressively worse as the central character’s life changes and his job as a transporter spawns two more sequels. However, give it a watch if you are a fan of beautiful German sedans.

The first sequel was very much about impressive cars and incredible car chase scenes. There was also a lot of actions. But who can forget the epic car chase scene with a BMW 735iL performing transporter duties such as evading the bad guys, the police and delivering packages. In the second sequel onwards, the Transporter movie focused on the Audi A8.

If you can watch this film without searching classifieds for the aforementioned cars, you may not have enough oil in your veins. A scene from Talladega Nights: The Ballad of Ricky Bobby (2006) movie
Will Ferrell can effortlessly shred a very crazy American male who has many unrealistic beliefs and almost psychotic machismo in this movie. Best part is that, Will can do it with a smile.

Will takes audiences to the lighter side of the National Association for Stock Car Auto Racing (NASCAR) with his character Ricky Bobby. Talladega Nights is one of few car movies that put comedy and racing together.
Talladega Nights Crash & Fire Scene A scene from Cars (2006) movie
Cars (2006) is a Pixar movie, so it was something of a passion film where you can get your kids started in the world of many talking cars that are beautiful to look at. These talking cars feel more alive than talking cars should. Although the plot develops along a predictable path, it is packed with moral lessons, making the movie enjoyable from almost start to finish. Rush (2013) depicts the danger of the 1970s Formula One racing, as well as bravery of the racers, so expertly

The Rush (2013) tells the true story about the epic battle of James Hunt and Niki Lauda. The movie depicts the danger of the 1970s Formula One racing, as well as bravery of the racers, so expertly. Rush (2013) also shows the relationship between two highly skilled racing car drivers (who develops a fierce rivalry in F1) better than any other movie to date. F1 racers are intensely competitive but also have considerable respect for one another and the movie has been a really successful thing by depicting this spirit with great authenticity.

All in all, Rush (2013) is such an emotionally driven story, and has some attractive racing. It is also a great film in its own right and defnitely a must watch. Days of Thunder centers on a young driver who gets his chance to compete at the top level
Back in early 1990, Days of Thunder was many people’s first exposure to racing sports cars.

The movie had a large budget, famous stars (Tom Cruise and Nicole Kidman) and a big director. Days of Thunder centers on a young driver who gets his chance to compete at the top level. The movie shows you what not to do with Chevrolet Lumina rental cars and Ford Taurus.

For many fans of racing and Cruise aficionados, Days of Thunder remains a cult figure today. It has the fun of those American International Pictures films, perhaps it doesn’t work if you take the whole thing too seriously. 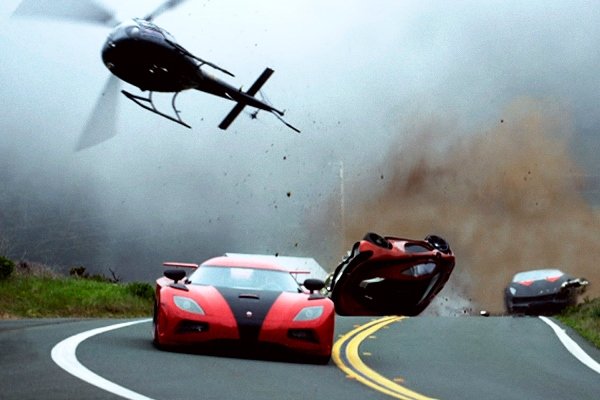 A scene from Need for Speed (2014) movie
Need for speed was a good movie in theaters in 2014. It may not win awards for its cinematic excellence, but it is surely going to your favorite car flick as the filmmaker’s refusal to use computer generated imagery. This means all the chase scenes, crashes and action sequences you see in the film are real. People hope these things don’t happen in real life, but they can’t stop watching.

For the list, we have concentrated on the most popular movies we think are absolute musts for car addicts. So, stop waiting, grab a popcorn and have a great time at home!