The Galant is one of Mitsubishi’s timeless classics.

The Mitsubishi Galant came out in 1969 initially as a compact car. Several years later in 1983, it grew up to become a midsize sedan. The Japanese carmaker then went on to develop and sell the said car until it reached its tenth-generation version before canceling it after Mitsubishi Galant 2017 was launched due to poor sales.

Suffice to say, it was one of Mitsubishi’s most notable sedan models during the height of its career. Thus, many people are missing the said model. 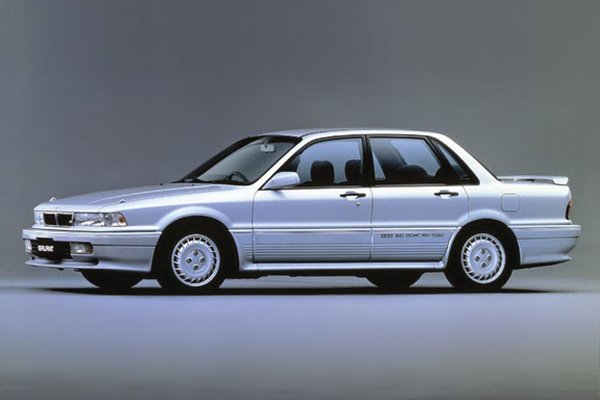 One of the most desirable generations of the Mitsubishi Galant however, was the sixth-generation models. It was sold here in the Philippines from 1988 to 1993, and it was a taste of what Mitsubishi could offer in terms of performance.

So until today, many car guys, regardless of whether they’re viewing the car with rose-tinted glasses or not, are still restoring and driving the sixth-gen Galant. So what made this particular generation so special?

From 1987 to 1993, the Galant was available locally in three trim levels. As with most Mitsubishi products, the Super Saloon entry-level variant was an econo-car powered by a carbureted 1.8-liter SOHC engine. It was slow, but it did make a decent 92 horsepower and 137 Nm of torque. As with most entry-level models, the 1.8 Super Saloon was only available with a five-speed manual with power being sent to the rear. Next up was the 2.0-liter Super Saloon which came with the slightly more powerful, SOHC powerplant that was paired with a five-speed manual or four-speed automatic gearbox. Instead of a carburetor, this one came with electronic fuel injection (EFI). This made it and the top-spec GTI one of the first EFI cars available in the Philippines.

The said engine made 114 horsepower and 168 Nm of torque, and power was sent to the rear. Was the 2.0-liter Super Saloon sporty? Well, kind of since it was definitely lighter than the Toyota Corona and Nissan Bluebird which it competed against.

The top Galant variant though was the most powerful. It’s called the Galant GTI, and like the mid-tier variant, its fuel system was EFI. Its engine however was something special. It was a 2.0-liter DOHC engine capable of producing up to 145 horsepower and 172 Nm of torque. The said engine is none other than the 4G63 that eventually came on the Lancer Evo cars.

This made the Galant GTI one of the sportiest models available in the Philippines from 1988 to 1993. For many who lived through this era, the Galant GTI was probably their first taste of the 4G63, and what Mitsubishi could do if it flexed its performance muscles. The Galant's design is functional but beautifully timeless

Unlike most top-of-the-line variants of models available today, the GTI only had a five-speed manual. It also had Ralliart Side Skirts and a rear spoiler, dual exhaust pipes, and blacked-out moldings. With that tranny combined with the 4G63 and the rear-wheel-drive, the Galant GTI was one of the better-handling cars during its time.

From the get-go, the Galant GTI’s sporty body kits weren't just for show. That’s unlike newer models that we’re seeing today that are clad in “sporty” pieces and body kits but have none of the bites of a real performance-oriented powertrain. For the 1989 sixth-gen Galant Japanese version, Mitsubishi and AMG partnered up to produce the Galant GTi-16 AMG variant. Its engine was tuned to make 168 horsepower and it also came with a full-leather interior, a unique body-kit, as well as a set of unique alloy wheels. This was the first, and the only Japanese model that was tuned by AMG.

In the 1988 to 1992 World Rally Championships, the VR-4 Galant became the basis for the brand’s rally car. Eventually, the 4G33 turbo, as well as the VR-4’s four-wheel-drive made its way to the first Lancer Evo with little to no changes.

That said, many car enthusiasts and fans of the Mitsubishi rally-team called the Galant VR-4 the “father” of the Lancer Evo. Moreover, the sixth-gen Galant was the first to introduce the VR-4 versions. So essentially, if this generation of the Galant didn’t exist, there’s a high probability that there would be no Lancer Evo. To sum it all up, the Mitsubishi Galant sixth-gen is one of those cars that will leave a legendary mark on a car company’s records. It paved the way for Mitsubishi’s long dominance in rally racing after all.

For the Philippines, the Galant GTI was also one of the first cars that gave us a taste of what a modern performance car can do. That said, the sixth-gen Galant definitely made an impression on many Pinoys. Heck, many people are still thirsting after it to this day.

That said, the Galant is one of the more popular project cars you can undertake today. It’s also one of the more accessible performance “classic” cars in the used market, since spare parts are plentiful, and there are a lot of people capable of fixing and restoring a banged-up Galant GTI to its former glory. If you want one, do check out our Mitsubishi Galant car for sale section. You might just spot one that’s in decent shape.

The Mitsubishi Galant is a mid-size, four-door sedan enjoyed for nine generations. Mitsubishi Motors initially launched it as a compact vehicle but after several facelifts and internal updates, it was offered as a mid-size automobile. During its active years, it is one of the Japanese carmaker’s highly-demanded models selling over 5 million units. It features a subtly-designed and timeless exterior detailed with fine lines and curves. Inside, it offers a roomy exterior equipped with safety and comfort amenities the driver and passengers will adore. The Mitsubishi Galant comes in two trims: the Mitsubishi Galant ES and the Mitsubishi Galant SE. It is offered in Rave Red, Quick Silver, White Pearl, and Kalapana Black.