It features tweaks that will complement the nameplate’s off-road reputation.

While the J300 is only the latest Toyota Land Cruiser to place a premium on comfort, it’s not about to become a street queen. Toyota wants to reassure fans that it’s not abandoning the model’s off-roading heritage, as it introduces the full-size SUV’s GR Sport variant.

This makes the new-generation Land Cruiser the fourth recipient of Toyota’s Gazoo Racing treatment, reserved for models imbued with motorsport-derived upgrades straight from the factory. These enhancements are expected to bolster the vehicle’s reputation as the legendary machine to beat on drives where the asphalt ends.

Toyota says that the product brief for the GR Sport stipulates a vehicle that’s secure and easy to drive yet can handle even the most challenging driving conditions. The company even gathered feedback from Dakar rally drivers who have sat behind the wheel of a Land Cruiser in the production car category dating back to 1995. 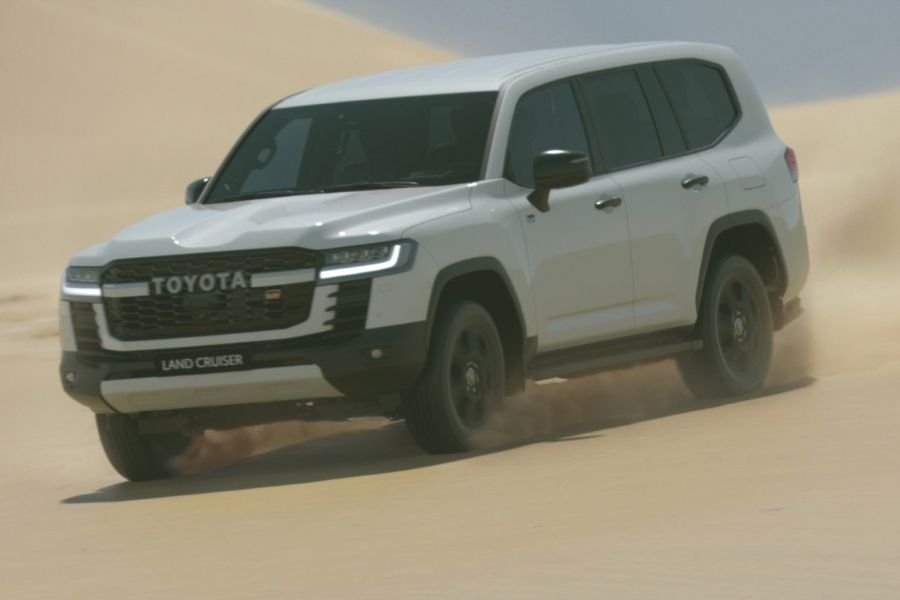 Dakar Rally drivers requested modifications to the bumpers and suspension arm placement, among other things

It seems that the carmaker’s efforts have paid off, resulting in several improvements over the standard model. Chief among these is a revised rear suspension system, as the Land Cruiser GR Sport gains front and rear electronic differential locks over the regular version’s optional Torsen limited slip differential at the rear axle.

These work in concert with Toyota’s Electronic-Kinetic Dynamic Suspension System (E-KDSS), ensuring that the vehicle maintains its grip on the road even after jumping off uneven sections of the road at medium to high speeds. The E-KDSS further adjusts the front and rear stabilizers based on road and wheel conditions in precise increments, which improves handling when negotiating rocky trails. It seems that Toyota is eager to showcase the Land Cruiser GR Sport’s capabilities, as the company announced that it will be joining the 2023 edition of the Dakar Rally with a contender based on the new model.

Along with the performance tweaks, the GR Sport’s aesthetics also get a makeover as Toyota distinguishes the variant from the rest of the Land Cruiser range with a new body kit. The revised fascia brings bigger bumpers and blacked-out mesh grille, proudly wearing the GR badge. Fender claddings hovering over the 18-inch Mud Gray alloy wheels are also rendered in black, same with the stepboards, side mirrors, and door handles. The interior upholstery gets a red and black color palette on the sporty bucket seats. A carbon weave pattern can be found on the dashboard and leather-wrapped steering wheel, which also features a ‘GR SPORT’ badge on the bottom spoke.

As with the standard Land Cruiser, the GR Sport offers either a 3.5-liter twin-turbo gasoline V6 rated at 415 hp and 650 Nm of torque, or a smaller 3.3-liter twin-turbo diesel V6 packing 309 hp and 700 Nm of twist, both linked to a 10-speed Direct Shift automatic gearbox. Power is channeled to the ground through a full-time all-wheel drivetrain.

Catch more stories on the latest releases at Philkotse.com.

The Land Cruiser has been around from time immemorial. In fact, it is currently the longest-running model still in production by Japanese auro brand Toyota. Its heritage and lineage started way back the '50s. Time has already tested the reputation of the Toyota Land Cruiser. It came from a total off-road car and evolved into one of the market's most luxurious SUVs.

Fast forward, and Toyota Motor Philippines has brought in the all-new Land Cruiser for the model year 2022. It retains the same off-road capabilities that its predecessors are known for as it comes with a 4x4 drivetrain, and a ladder frame chassis. Instead of a V8 however, it now uses a twin-turbo diesel V6 that can make up to 304 horsepower and 700 Nm of torque. It also gets the Toyota Safety Sense driver-assist suite, and a sharper, more modern-looking exterior design.