It nearly finishes first, which says a lot about the potential of electrics.

Like most carmakers joining the worldwide shift to battery-powered cars, Kia believes that the future is electric. We’re talking about energy that’s sustainable, emits zero noise as well as no emissions, and can make the world’s fastest supercars eat dust.

The video below shows the matchup between the Kia EV6 GT and some of the world's fastest cars, including one supercar, taken from Kia's livestream reveal.

Well, most of them anyway. Along with the Korean carmaker’s grand debut of the EV6 as its first dedicated electric vehicle, it challenged five of the world’s speediest automobiles to a drag race, namely the Lamborghini Urus, Mercedes-AMG GT, Porsche 911 Targa 4, Ferrari California T, and McLaren 570s

Make no mistake, all of them are powerful machines, but they’re largely trumped by the top-spec EV6 GT packing 577 hp spinning all four wheels; only the Urus exceeds this with 641 hp. Powering the electric Kia’s dual-electric motor setup is a fast-charging 77.4 kWh battery pack, the largest available for the model. 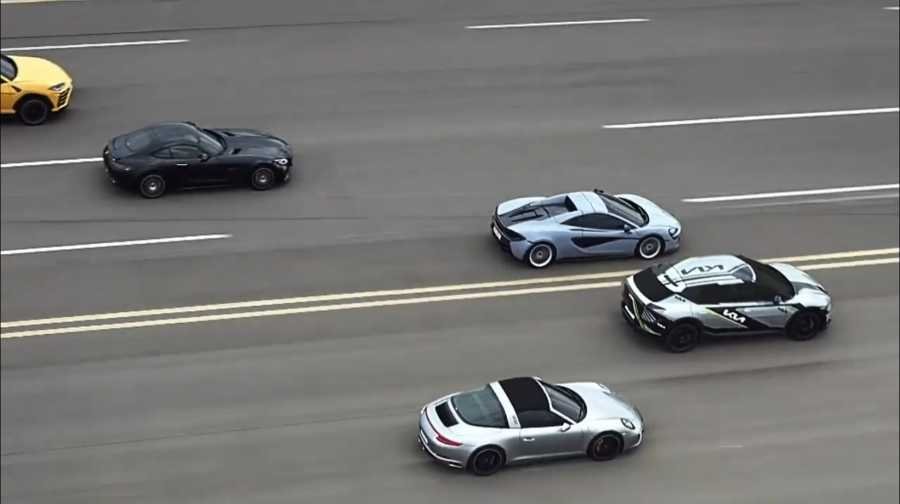 It's an early lead for Kia's first dedicated electric vehicle

At the starting line, the combustion-powered contenders were revving their engines in an apparent effort to psyche out the EV6 GT, which was just bracing for the green light without so much as a peep. When the race commenced, the Kia’s nose pulled ahead of the rest of the pack in a spray of bitumen with ridiculous ease. It was a close fight, with the EV6 GT only behind by a hair

For a fleeting moment, it was easy to tell that the EV6 GT would leave all others high and dry as it steadily widened the gap. But one unlikely rival was able to catch up: it was the 750S, quickly turning the tables on the electric challenger. The McLaren’s tail managed to line up with the Kia’s front end, eventually crossing the finish line first but not without the EV6 GT nipping at its heels. Would you pit this against your favorite supercar?

While winning the race probably wasn’t what Kia had in mind, it would have been a nice touch. But the sight of battery power going head-to-head with some of the best that gasoline has to offer makes quite the strong case for shifting to electric vehicles. The engine note is all you’ll miss anyway, although for proponents of internal combustion, that’s exactly the point. The GT uses the same interior as the standard EV6, albeit with a more serious black palette and racing seats

The electric Kia is also the most affordable among the contenders, relatively speaking, with the flagship GT trim estimated at just $80,027 (Php 3,886,951 at current exchange rates). It goes on sale by the second half of 2021, with some markets already accommodating preorders. Is this something you’d want Kia Philippines to bring over in the near future?

Get ahead with the latest automotive news at Philkotse.com.

Searching for a specific Kia car online? Visit Philkotse.com where every model is offered at a good price. Also, familiarize yourself with the latest news and car review through its user-friendly site, as well as the latest Kia price list in the Philippines to keep you informed of how much your dream Kia is currently.