The Ford Mustang Shelby GT 2019 has finally taken off its camouflage and it is preparing for its launch, along with the Woodward Dream Cruise. Developed from the Mustang GT, the Shelby GT can be ordered as a convertible or a fastback and receives a plenty of tweaks.

Walking around, the car comes adorned with a set of 20’’ wheels, side stripes, a “deep draw” hood with prominent vents, rear spoiler, rear shocks, front struts, side skirts and a special front grille.

The Shelby GT 2019 is available with extra options including the Shelby Premium Package that comes with new illuminated door sill plates and a fresh front fascia assembly. Besides, a Heritage or GT-H package is also added to celebrate the Shelby GT’s inspiration. Specifically, the Shelby GT-H is offered white or black cue with optional gold wheels and gold stripes. 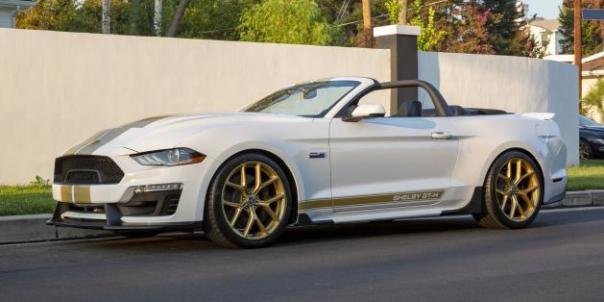 Moreover, the car is armed with the Shelby Heavy Duty Package which gets an “extreme” radiator, along with performance half-shafts, wheel studs and a new coolant tank. If it’s still not enough for passionate enthusiasts, a Ford Performance supercharger promises to satisfy their desire. It is capable of making the 5.0 L naturally aspirated V8 engine crank out up to 700 hp and painted stripes.

According to the latest car news, the Ford Mustang Shelby GT 2019 has a starting price at $61,345 for the standard version. To get the Premium and Heritage version, you have to pay an addition of $66,345.

>>> Read these following articles to get more information about the Ford Mustang Shelby GT 2019: