2021 Kia Picanto: Expectations and what we know so far

The Philippine-spec Picanto should be due for a facelift next year.

One of the most practical vehicles that is available in the local market right now is the Kia Picanto. This hatchback is being used mostly by young professionals or starting families due to its practicality and affordability.

*Disclaimer: This video is the current Kia Picanto available in the market. Check out for your reference!

Looking at the Picanto, you can say that is not a bad-looking hatchback even when compared to its rivals. However, the Picanto will have a tougher time competing now that Toyota Motor Philippines (TMP) has introduced a facelift Wigo that embodies a sportier and sleeker look.

Nonetheless, there are already speculations as to how the 2021 Kia Picanto would come about in the local market. With that in mind, here are some early expectations people can anticipate for the upcoming Picanto.

The expected exterior features for the upcoming Picanto are promising. There is already a facelifted Kia Picanto globally that hosts a sportier look as compared to the one offered by Kia Philippines. Unfortunately, it wasn’t introduced in the country yet as of this writing.

The exterior upgrades include a new grille that comes with a chrome trim that splits the grille. The projector headlamps are also redesigned, adorned with LED daytime running lights (DRL). These changes made the Picanto look more aggressive than ever. For the lower portion of the front fascia, the bumper has been reshaped and now looks more angular. Moreover, there are two new fog lights placed on the blacked-out bumper. This gives subtle off-road visuals which could be good or bad, depending on who’s looking.

In the Picanto’s homeland where it is called the Kia Morning, the hatchback is offered with new 8-spoke alloy wheels that look neater than the current Philippine-spec model. As for the rear end, the design looks pretty much the same. The only added feature is the new LED-type rear combination lights. But that should be enough as the Picanto doesn’t offer LED lighting. It seems like going for a sporty look is the likely trend for the local hatchback segment. Well, this statement makes a lot of sense since most hatchback buyers are young individuals who want a stylish vehicle. With that in mind, it would be great to see this facelifted Picanto be introduced by Kia Philippines next year.

The dashboard layout of the facelifted Kia Picanto wasn’t updated as much as the exterior. The only change for the interior is the color-based trims that can be found on the front seats, while the rear seats get contrast stitching. Yes, you can say that it is just a small update. However, we think that it could be enough to make it stand out in its segment especially that it is marketed as an affordable vehicle. The PH-spec Picanto offers a black interior layout with white stitching on the front and rear passenger seats.

In Malaysia and Europe, there is a variant of the Picanto called the X-Line. This variant comes with a more appealing color scheme with limelight as its main color. Kia Philippines isn’t offering any exclusive variant for the Picanto so the X-Line could be a good start to do so.

Under the hood, well, the engine used is the same as the PH-spec Picanto. The facelifted Picanto uses a 1.0-liter inline-3 Kappa engine capable of making 63 horsepower and 96 Nm of torque. However, the facelifted version now comes with Smart Stream Technology that helps ramp the power of the 1.0-liter engine up to 73 horsepower. 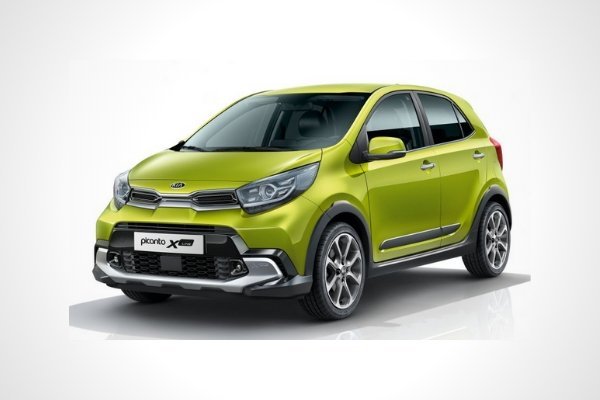 Kia Philippines will still likely offer the larger 1.2-liter Kappa gasoline engine for the 2021 Picanto. This is to provide customers who want a little boost with their hatchback. The larger engine option is capable of making 83 hp and 121 Nm of torque.

The 1.2-liter Kappa gasoline engine is probably the biggest engine we can expect for the Picanto. One of the top-selling points of the hatchback is its practicality. Adding a performance level engine as an option is not the best move for Kia Philippines.

The facelifted Picanto comes with a larger 8-inch infotainment screen. This head unit comes with Bluetooth connectivity, Apple CarPlay, Android Auto, Kakao voice recognition, and a navigation system. For comparison, the PH-spec Picanto is equipped with a 7-inch infotainment screen that surprisingly supports both Apple CarPlay and Android Auto for its affordable pricing. The current Kia Picanto offered in the local market

As for safety, the facelifted Picanto comes with a significant amount of upgrades such as a rear cross-traffic alert system, an alert system with rear collision prevention, blind-spot monitoring, a forward-collision warning, and a lane-keeping assist. Korean automaker Kia undoubtedly did a good job in adding these safety features while still keeping a relatively affordable price point.

The added safety features could be a great selling point for the Picanto in the country. If it is indeed added for 2021, then the Kia Picanto could be an early candidate as the safest hatchback available in the country.

As said earlier, Kia Philippines hasn’t released any statement regarding the matter. However, one can expect that the Picanto facelift will be introduced in the local market around the second half of next year.

As of this writing, Kia Philippines is offering cash discounts for the 2020 Kia Picanto. All variants can be availed of with a Php 50,000 cash discount, while the base 1.0 LX MT variant comes with a low down payment of Php 1,000 only.