2021 Hyundai Tucson: Expectations and what we know so far

All-new Tucson is looking to make a solid impression in the local crossover segment. Here’s what we already know about the 2021 Hyundai Tucson and what we can expect from a Philippine-spec version.

Hyundai revealed the next-generation 2021 Hyundai Tucson featuring an all-new new design. The said vehicle is currently on sale in its home market of South Korea, while the rest of the world will receive the new model next year.

In connection to this, Hyundai Tucson has been a mainstay in Hyundai Philippines' model lineup. As such, it is inevitable that it will arrive on Philippine shores in the near future.

But before it arrives, let us discuss what we can expect from the all-new Tucson, and what we know from the many news tidbits that have been released about it during its testing phase, and during its global debut. With regard to pricing, there’s no information yet even from the Hyundai global website. We are certain however that the fourth-gen NX4 Tucson will carry a significantly stiffer price tag compared to the current model available worldwide.

Here in the Philippines, the current Tucson’s price ranges from Php 1,368,000 to Php 1,885,000. The 2021 Hyundai Tucson however has loads of improvements from its exterior and its on-board features. As such, we can expect its price to increase.

When it comes to styling, the 4th-gen Tucson is quite a departure from the previous version. From the front, it adopts an aggressively futuristic appearance with its angular lower bumper and fog-light housings, the large grille made out of triangular shapes, and the daytime running lamps that were fused with the said grille. 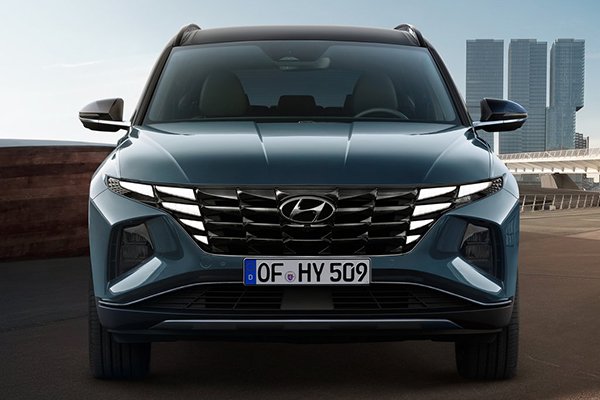 Towards the sides, the 2021 Tucson sports more angles, thus bringing up its muscularity to a whole new level. The fender flares are downright sharp, and the wheels look like what a “cyber-ninja” would throw at you in battle.

The rear is also interesting with its slick taillights that span the width of the rear end. There’s also the rear wiper which cleverly hides under the rear spoiler.

Overall, one can say that the all-new Tucson is both “exaggerated” and futuristic. At the same time though, it still has elements that show how tough and practical it is. And boy, it sure is a rugged crossover. More on that later. 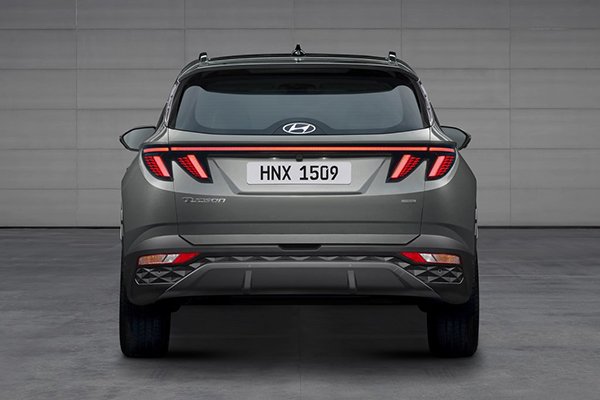 The rear of the 2021 Tucson continues the angular, futuristic theme

Inside, Hyundai obviously gave the 2021 Tucson a nudge up in sleekness. The dashboard was redesigned to look more seamless, and the result is a roomier, classier look. It veered away from the old, rounded designs found in the former version.

Regrettably, for drivers with more traditional tastes, the new Tucson no longer comes with physical buttons. The controls however are well arranged, so we’re certain that you won’t be grasping blindly at the 2021 Tucson’s controls while driving.

The gauge cluster was also replaced by a fully digital unit. However, we’re certain that a lot of people will like the new gauge cluster since it’s probably more visible and more customizable than the old analog one. 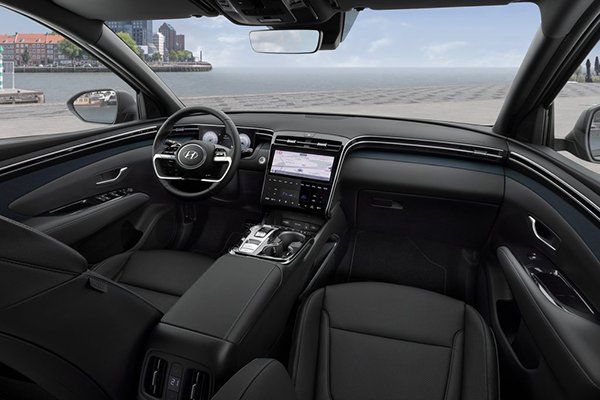 As with the exterior, the interior of the new Tucson is quite a departure from the old one

The all-new Tucson also gets a larger, dual-screen infotainment system that seemingly “flows down” towards the center control. As a result, there’s now a cubby hole below the said touchscreen. It provides an “airy” feel to Tucson’s interior, and we bet that you can store small objects in that hole too.

The center console itself was also streamlined, and gone is the stick-type shifter. For the new Tucson, gear changing will be done through a push-button selector. The old three-spoke steering wheel was also replaced by a slimmer two-spoke wheel, which in turn features better-arranged buttons.

In select markets, buyers of the new Tucson can select either grey or black for the predominantly soft-touch interior. The seats are also available in fabric or leather. Lastly, the top trim 2021 Tucson variant also comes with a 64-color interior ambient lighting feature which can be adjusted in brightness.

Apart from looking premium, the 2021 Hyundai Tucson is also very high-tech. For starters, the large 10-inch screen comes with Apple CarPlay and Android Auto. Apart from that, the new infotainment system can connect with two phones at once, allowing users to switch between devices seamlessly.

The large 10-inch screen however is only available on top variants. The lower trim-levels of the new Tucson will get a smaller eight-inch screen, but it’s no less capable than the larger 10-inch unit since it also comes with Apple CarPlay, Android Auto, and Bluetooth.

Apart from the aforementioned connectivity features, the new infotainment system will also have a Wi-Fi hotspot function and a SiriusXM satellite radio feature. According to sources, a Bose sound system will become optional depending on the market.

For safety, the 2021 Hyundai Tucson comes with the usual modern car safety equipment. It has anti-lock braking with electronic brake-force distribution, ISOFIX, a lot of airbags, etc.

Apart from that, it will also come with high-tech driver-assist features such as warning systems, pedestrian and object detection, and blind-spot monitoring from different angles.

Notably, the top-trim variants will be equipped with a Remote Smart Parking Assist feature which allows the new Tucson to park, and get out of parking by itself. And finally, it will also have smart cruise control, which borders on real autonomous driving.

>>> Related: 2021 Hyundai Tucson may look pretty, but it is one tough crossover

The 2021 Tucson has four engine options. The most notable of which is the hybrid powertrain, which uses a 1.6-liter gasoline engine and an electric motor. Combined, it can make up to 230 horsepower and 350 Nm of torque.

As shown in the new 2021 Hyundai Tucson’s trials, the said powertrain is capable of dealing with the rigors of hot, to freezing cold weather. It also had no issues with towing loads around the curvy roads of the Austrian Alps. It can even wade through 300 mm deep water with no issues at all.

To aid the 2021 Hyundai Tucson in performance in adverse conditions, all of its variants will come with the Hyundai HTRAC all-wheel-drive system. This enables the new Tucson to deal with various road conditions including sand, mud, and rocky roads effectively.

Moreover, the hybrid variants of the Hyundai made crossover is equipped with E-Handling technology. This feature provides better cornering and better response to slippery road conditions. The 2021 Tucson during its testing trials

Apart from the hybrid engine, the 2021 Hyundai Tucson will also get a 2.5-liter inline-4 gasoline engine that can yield a maximum of 187 horsepower and 246 Nm of torque. There are reports that the new model will also be getting an N-Line version that’s good for 300 horsepower.

Lastly, it seems that Hyundai has dropped the good old 2.0-liter gasoline mill from the new Tucson. The 2.0-liter diesel, however, will still be available depending on the market. A 1.6-liter non-hybrid gasoline engine is also available for the 2021 Tucson, and we’re certain that this will replace the 2.0-liter mill.

With regards to transmissions, there’s a chance that Hyundai will keep the old six-speed torque converter as well as the six-speed manual for the Philippine-spec variants. It has been confirmed, however, that the top-of-the-line hybrid variant is getting an eight-speed automatic. There are also rumors that the versions with the 2.5-liter mill are getting the eight-speed tranny as well.

With the debut of its 4th-gen version, the Hyundai Tucson is entering a new era. Its styling is unlike anything we’ve ever seen before from the Korean car maker’s stable of crossovers. In fact, the all-new Tucson’s design is one of the early heralds of the totally new Hyundai design language called “Sensuous Sportiness.”

On top of its revolutionary new looks, the 2021 Tucson’s robust chassis combined with the powerful engines will certainly do a lot to attract new crossover buyers.

We’re talking about the kind of buyers who were apprehensive in getting a crossover before due to the pre-conception that crossovers can’t be as tough as body-on-frame SUVs. With the new Tucson Hybrid’s output, it might even prove to be a fun and nimble vehicle that’s also practical. Do you like the look of the 2021 Hyundai Tucson?

That said, we’re expecting the Philippine-spec Tucson to do well in local conditions. Regardless of what powertrain we’ll be getting, its chassis’ capabilities are already well documented during its trial runs.

We do hope though that Hyundai PH will consider introducing the 2021 Tucson Hybrid here, because with that version’s onboard technologies, striking good looks, and significant power output, it has the potential to blow competing crossover models out of the water.

<p>The Hyundai Tucson is a compact, five-door crossover with a front-engine, front-wheel-drive layout. It can fit in up to five occupants including the driver, and it has a default cargo space of&nbsp;877-liters. For the Philippine market, the Hyundai-made model either gets a 2.0-liter inline-4 gasoline engine or a 2.0-liter turbodiesel inline-4. The gasoline engine option can make up to 155 horsepower and 192 Nm of torque. The diesel option can produce 185 horsepower and 402 Nm of torque. Only the entry-level GL 2.0 FWD MT is available with a six-speed manual transmission.The automatic gasoline variant uses a six-speed automatic gearbox, while the diesel variants come standard with an eight-speed automatic transmission.</p>