5 things you might now know about car wind deflectors

Car windows are important, so are wind deflectors but not many people know about this term. So, it's time to have a deeper understanding of this interesting car part.

A lot of people find it easy to learn how to drive. However, not a lot of people recognize each part of their vehicle – much less know what they’re for. One of the many parts that are hardly recognizable to Filipino drivers is wind deflectors.

If you belong to that group, well you’re in luck because Philkotse.com broke down everything you need to know about them.

1. What is Wind Deflectors?

Wind deflectors by definition, are those things mounted on the top area of automobile doors. This can also be called “monsoon shields” or “rain visor”, depending on which part of the world you come from. Their main purpose is to deflect rain, light precipitation, and harsh wind whenever you roll the windows down.

Wind deflectors deflect rain, light precipitation, and harsh wind whenever you roll the windows down

2. How do Wind Deflectors Work?

Wind deflectors utilize the concepts of the simple principles present in “aerodynamics”. The mere presence of wind deflectors can alter the outright flow of water and air all around your vehicle.

If you think they are just there for design or to add “contrast” to the overall look of your ride, then you may need to learn more about automobiles and its important parts.

Wind deflectors are intelligently engineered with the goal of changing your automobile’s aerodynamic contour. This is why even though they all look the same, you’ll notice that there will still be slight differences with the wind deflectors installed on different types of four-wheeled vehicles – cars, trucks, SUVs and so on.

That’s because the shape, make an angle of wind deflectors are made according to the size, height, and contour of the vehicle.

If an installed wind deflector is made and installed effectively, air and liquid elements should be routed to the sides of your vehicle while the proper amount of ventilation should be provided and retained to the open windows and vents.

>>> Read more: Car power window: All about its advantages & disadvantages.

3. What Materials Are Wind Deflectors Made From?

Wind deflectors are made with accuracy and precision by manufacturers to deliver effectivity and quality to the future owner of the vehicle. These can be made from cast acrylic, acrylic plastic or acrylic glass – depending on which material the manufacturer deems best for the vehicle.

Wind deflectors are made with accuracy and precision by manufacturers

The choice of material also varies depending on which material best fits into the vehicle and gives seamless results after the installation. Manufacturers also paint the wind deflectors with black or whatever color is dark enough for their taste. This is to decrease the glare that the driver or the passenger receives from the sun while inside the car.

4. What are the Benefits of Wind Deflectors?

The aerodynamic principle used in making wind deflectors tosses wind on the side of the car instead of inside the vehicle.

Using the same principle, the wind tossed on to the side of the vehicle carries a large number of sound waves as emitted by the respective sources. The lesser wind that enters your vehicle also carries less of this, thus, less noise.

Due to its thin design and usual black color, it also adds a sense of contrast to the exterior look.

Due to its thin design and usual black color, it also adds a sense of contrast to the exterior look

These can be both in accordance with your vehicle type. In some occasions, these are custom designed for your car’s year, make and model so they are easily fitted.

Made from tough material

It can withstand almost all weather elements – harsh rain, strong wind as well as intense heat.

The first on our list is In-Channel Wind Deflectors. These are the types that are custom-fitted in accordance to your car’s specifications and dimensions. These function like a typical wind deflector, allowing you to stay in the vehicle and drive along without getting blown away by the wind.

The In-Channel Wind Deflector type helps to regulate how much of the air from outside enters your vehicle. Imagine not having any type of wind deflectors at all. The wind would just come in from different directions and could even get small, foreign objects into your eyes, nose, and mouth.

By having this type installed on your vehicle, you can also hear the sounds outside that traveled on the calmer air as regulated by the in-channel wind deflector.

Slim wind deflectors are mainly named after the way they look. These are slim and possess a lower profile that maintains a sleek look when attached to your car windows. They also work effectively in diverting the route of extra air so it doesn’t swaddle your face if you happen to roll the window down while driving.

Another resemblance it bears with the In-Channel Wind Deflectors is the ease of installation. All you need to do is peel back the protective coating at the back and then apply the sticky backing on to the specified area on your vehicle, and voila! You’re done.

Slim wind deflectors are mainly named after the way they look

This type of wind deflectors uses aerodynamics in a more complicated way to live up to its name. The design of bug deflector adds enough trajectories to the winds that flow towards you to instead route the bugs upwards.

So instead of the wind and bugs gushing inside the car and into your face, it should go over the vehicle instead. Due to the powerful amount of wind that this can deflect out of your in-car environment, this is also effective in keeping wind noise out of your vehicle.

>>> You might want to read: 3 easy tips every Pinoy driver should know to keep bugs away from the windshield.

These are fairly the same with the first type on our list, the In-Channel Wind Type Deflectors for Cars. However, this type is made for larger vehicles like trucks that have massive and oddly-shaped windows. 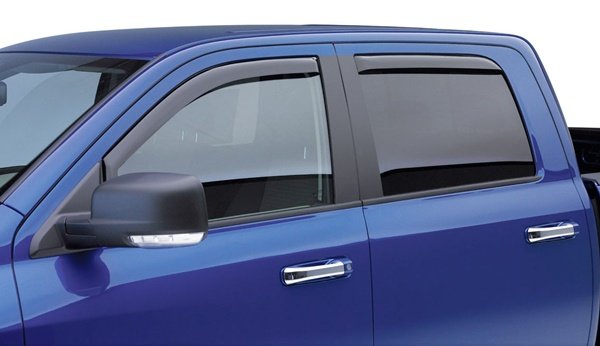 Unlike its counterpart for the smaller vehicles, these in-channel wind deflectors for trucks also have other benefits for the bigger vehicles. Two of these are keeping the windows from fogging as well as deflecting bugs that may get inside.

The last one on our list is placed a little differently than the other four mentioned above. However, this functions pretty much the same way, except that it’s placed overhead rather than on the side of the vehicle.

It eliminates the flow of strong, rugged air into the vehicle as well as limits the possibility that bugs could fly in and drop from your open sunroof.

Sunroof wind deflectors eliminate the flow of strong, rugged air into the vehicle