Nissan’s first all-electric crossover SUV made its world debut, and the Japanese automaker didn’t disappoint as the production-spec Ariya looks similarly close to its concept car version that was first introduced at the 2019 Tokyo Motor Show.

The 2021 Ariya shows Nissan’s commitment to further advance its electric vehicle (EV) development. As an all-electric crossover SUV, the Ariya offers an estimated range of 483 km (for the front-wheel-drive Ariya), which is more than enough to get you from Makati City all the way to Urbiztondo Beach in San Juan, La Union.

The Ariya also has enough battery juice to go head-to-head with other EVs in the global market today such as the Tesla Model X. However, the American crossover SUV offers an additional 82 km range as compared to the Ariya.

Nissan Ariya. The Next Gen-E

The dimensions of Nissan’s first all-electric crossover SUV is quite odd if you try to compare and figure out where it will sit in the Japanese car maker’s vehicle lineup.

Well, the 2021 Ariya could be an exception since this is an EV. But for the sake of having a better idea of the car, the Ariya could be slotted somewhere around the local-spec Terra and X-Trail. With that in mind, the 2021 Ariya is 35 mm wider than the Terra and comes with a longer wheelbase, 71 mm more, as compared to the X-Trail.

The 2021 Ariya is available in either front-wheel drive or all-wheel drive "e-4ORCE" configuration along with a choice of 63 kWh or 87 kWh battery.

Nissan says the Ariya can generate a power output of 215 hp to 389 hp, along with 299 Nm up to 600 Nm of torque. Nissan claims the Ariya can go from 0 to 100 km/h in 5.1 seconds. As such, this all-electric crossover SUV is no pushover as it packs serious power. The exterior of the 2021 Nissan Ariya comes with a sleek yet sharp appeal. The front end comes with a black grille, which Nissan calls an aerodynamic shield.

The grille seamlessly blends into the Ariya’s slim LED headlights that give the vehicle a smooth and imposing look. It also comes with subtle lighting which illuminates along with the new Nissan logo when the Ariya is ready to go out for a drive. Look at that sharp character lines

The striking design continues to be seen at the side as the Ariya comes with a sharp uninterrupted horizon character line that stretches across the side profile.

You can also see that the Ariya features a two-tone exterior paint, which adds to the vehicle’s unique styling. Moreover, you can’t help but notice the prominent fender flares of the 2021 Ariya.

>>> Related: Nissan changes its logo after 20 years, and here’s the meaning behind it 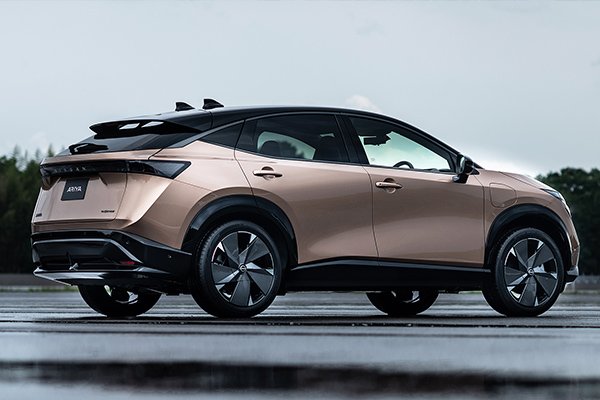 This all-electric crossover SUV is not short in style points

The rear, on the other hand, looks equally sharp and sleek as compared to the vehicle’s front and side. You can see that the C-pillar blends flawlessly into the rear deck while the one-piece taillights further add to the Ariya’s distinctive look. Of note, the taillights of the Ariya give a blackout effect when parked, and a consistent red illumination, day or night, when in use. The 2021 Ariya is finished off with a set of 19- or 20-inch wheels.

Stepping inside the cabin, one can instantly notice that the Ariya comes with a futuristic-looking interior theme. The instrument panel blends seamlessly with the shape of the cabin and transitions into the doors. It doesn’t have buttons and switches that we commonly see inside a car. Instead, the Ariya’s wooden center dash comes with haptic switches that vibrate when touched, similar to how touchscreens work. The 2021 Nissan Ariya comes with a sleek interior theme

In terms of tech, the Ariya is equipped with a 12.3-inch instrument monitor and a 12.3-inch center display, which has Apple CarPlay and Android Auto compatibility. The Ariya also features over the air or online updates, which includes software updates for the multimedia system, electric and electronic architecture, chassis, climate system, and EV settings.

Moreover, Nissan equipped the Ariya with a hybrid voice recognition system that’s said to come with advanced natural language understanding technology to handle in-vehicle assistance without the driver taking their eyes off the road.

The 2021 Ariya is also integrated with safety features such as Nissan’s ProPilot Assist 2.0 as well as Nissan Safety Shield 360, which includes automatic emergency braking with pedestrian detection, blind-spot warning, rear cross-traffic alert, lane departure warning, among others. It also comes with Nissan's e-pedal, which allows the driver to start, accelerate, decelerate, and stop using only the accelerator pedal.