The automaker describes it as the extreme version of the Urus.

Building on what has been its most successful model in history, Lamborghini has unleashed the 2023 Urus luxury SUV in Performante trim, which has gone through a weight-loss regimen while packing more power under the hood.

“The Urus Performante takes the supreme performance and distinctive looks of Lamborghini’s ground-breaking Super SUV to the next level retaining its luxurious versatility and delivering the most engaging driving experience,” said Lamborghini Chairman & CEO Stephan Winkelmann. “The Urus SUV sets the bar even higher for the SUV segment.”

In addition to its place as Lamborghini’s first-ever SUV and the best-selling model in its lineup, the Urus also conquered the 20-kilometer Pikes Peak Hill Climb with a new record for SUVs a week before the Performante trim level premiered. The standard model clocked in at 10 minutes and 32 seconds, beating the 10 minutes 49.9 seconds time set by the Bentley Bentayga in 2018.

While the regular Urus measures 5,113mm, 2017mm wide, and 1,638mm on a 3,002mm wheelbase, the new trim stands 24mm longer with a marginal wheelbase increase of 4mm. However, the Performante is also 9mm narrower and sits 20mm closer to the ground, all while being 47 kilograms lighter than the standard model. The exterior has been largely retained, with notable design updates. On the fascia for instance, the Urus Performante adopts more streamlined slats on the grille, accompanied by a revised front splitter made of carbon fiber. These are complemented by a new air curtain that directs airflow over the front wheels.

But the more noticeable enhancement can be found on the revised bumper and redesigned hood, now sporting air vents on either side and forged from carbon fiber. Even the roof is now offered in the material as an option, while the new rear roof spoiler with carbon fiber fins contributes 38 percent more downforce. The Urus Performante hugs the ground on either 22-inch forged or 23-inch alloy wheels secured by titanium bolts and wrapped in specially developed semi-slick radials by Pirelli.

Accommodations aboard the Urus Performante entail Nero Cosmus black Alcantara material with hexagonal stitching on the seats and Performante trim throughout. Further bespoke details when it comes to color and trim options are available with Lamborghini’s Ad Personam customization service. An optional Dark Package extends the matte black treatment to other areas of the cabin, complementing the black Alcantara leather steering wheel and aluminum interior trim. 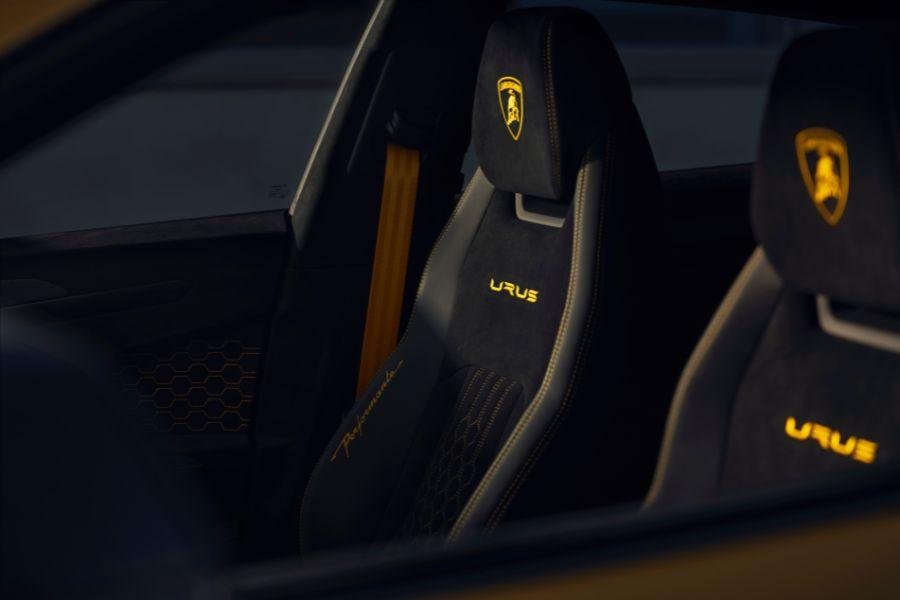 Performante branding is present on the seat bolsters

Powering the Urus Performante is the same 4.0-liter twin-turbo V8 gasoline engine with direct injection found on the current Urus, with the power unit tweaked to produce 657 hp. Torque remains at 850 Nm, now distributed more efficiently with a new differential. The Urus Performante can accelerate from zero to 100 km/h in 3.3 seconds, beating the standard Urus by a one-thirds of a second. An 8-speed automatic gearbox works with all-wheel-drive that features front, center, and rear differentials. Both the front and rear steering have been enhanced for quicker response. The three drive modes comprising Strada (Street), Sport, and Corsa (Race) have been re-engineered to give drivers flexibility in adapting to various driving conditions, accompanied by a new Rally option for dirt environments.

Marvel in awe at the latest automotive releases at Philkotse.com.