Land Rover officially pulled the covers off the next-generation Range Rover at the Royal Opera House in London. And at a glance, this represents a great step for the said marque in providing products that are capable, but also luxurious and environmentally friendly. We all get that Land Rover products have always been off-road ready and premium, but how is it environmentally friendly? Well, this new version will become available with an electrified powertrain, which we’ll talk about below. Beyond that, it offers a lot more in the way of comfort and style.

Starting with the exterior, the 2022 Range Rover assumes a streamlined look that somewhat departs from the angular, utility-oriented look of older models. Then again, it is having a boxy shape, but it has smooth lines and curves all over. That said, it’s more of a graceful-looking box on wheels. Its design has a lot of changes, but it still carries that familiar Range Rover look

Regardless of the evolution in style, it still carries some signature characteristics that were also featured on older generations. For instance, it still has a boat tail rear end, short front overhangs, as well as what the brand calls a falling roofline.

The hidden-until-lit taillights however, is a new feature and the marque says that it will become a future signature. It also has a longer wheelbase compared to the older model, and then rides on a set of 23-inch wheels. 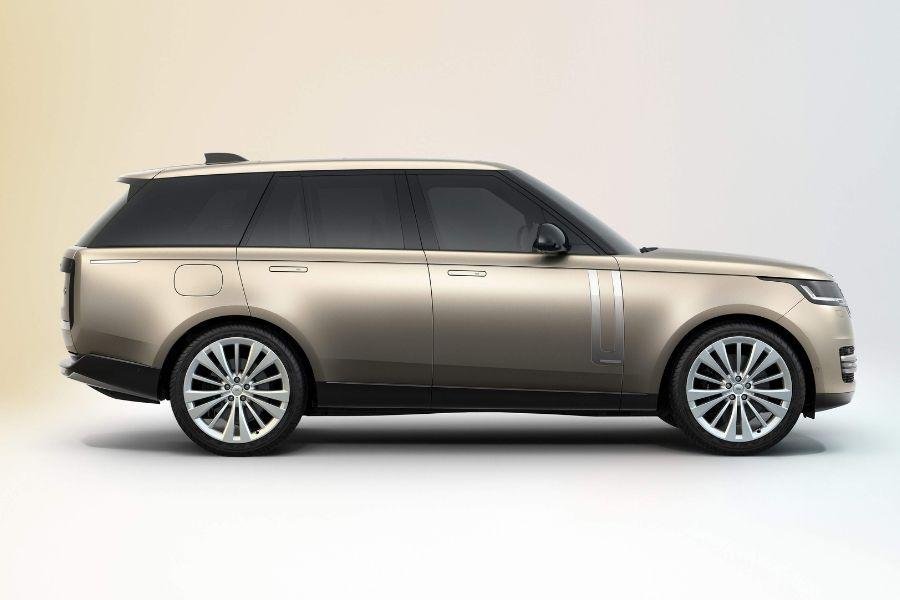 The new 2022 Range Rover from the side

Inside, the biggest change for the 2022 Range Rover is that the long wheelbase versions have received a third-row. This enables the said SUV to carry up to seven passengers. Also, the third row offers as much as 34 inches of legroom so it isn’t your typical seven-seater SUV. The said seats also feature heaters, and there are AC vents and USB charging ports for each row. The 2022 Range Rover with the optional third row

The brand also pushed the envelope in terms of interior styling with the addition of plush and eye-catching features. These include ceramic knobs and switchgears, marquetry wood veneers, as well as seats that are clad in a choice of wool-blend material, premium leathers, or non-leather Ultrafabrics. All of the aforementioned materials are sustainably sourced.

Depending on the buyer, the interior as a whole can feature two different themes. There’s the SV Signature and the SV Intrepid that are both coming in 2022. Of note, there’s also the optional SV Signature Suite that gives the Ranger Rover SV a four-seat arrangement, and adds on a refrigerator as well as an electronically deployable table. A peek into the four seater version

To keep its occupants cool and comfortable, the new Range Rover may also come with the optional Cabin Air Purification Pro which Land Rover claims can reduce that chance of viruses, bacteria and allergens like pollen from entering the cabin.

Highlighting the new Range Rover’s interior is a 13.1-inch touchscreen that uses a JLR Pivi Pro operating system. It provides haptic feedback, and it can connect to smartphones using wireless Apple CarPlay and Android Auto. The driver is also provided with a 13.7-inch digital gauge cluster with numerous configurations. Linked to the headunit is a 1600-watt Meridian sound system. It consists of 35 speakers, and it also has an active noise canceling function.

For the four-seater SV Signature Suite option, the second row also has access to an eight-inch touchscreen.

In terms of safety, not much has been revealed, but sources say that it will also feature numerous driver-assist features on top of the standard safety equipment one would expect from modern SUVs. A closer look at the 2022 Range Rover's 13.7-inch touchscreen headunit

As of the release, the all-new Ranger Rover can either come with a plug-in hybrid (PHEV) powertrain, or a 4.4-liter twin-turbo V8.

For the entry-level hybrid version, it uses a 3.0-liter inline-six combined with a 48-volt electric motor. Combined, this powertrain can deliver up to 395 horsepower and 550 Nm of torque.

The optional 4.4-liter twin-turbo V8 meanwhile, can churn out a maximum of 523 horsepower and 750 Nm of torque. This beefy mill allows the new Range Rover to achieve a 0 to 100 km/h time of 4.4 seconds. The new Range Rover from the rear

Later in 2023, a more powerful 434 horsepower PHEV variant will be released. Moreover, a fully electric version will follow in 2024.

Apart from the powertrains, the new Range Rover comes standard with all-wheel-drive. It also gets an active suspension system which lowers the vehicle when traveling on the highway for more stability as well as a lower drag coefficient.

When raised, the 2022 Ranger Rover can get a total of 440mm of ground clearance. This enables the said SUV to ford water depths by as much as three feet.

As with most new car releases though, we can expect the prices for the 2022 Ranger Rover to be different once it reaches Philippine shores. But as of yet, Land Rover Philippines is yet to announce when the new Ranger Rover will be released locally.