Though having been debuted on several markets like the United States and Australia, Toyota Camry 2019 (previously refered to as 2018 model year) has yet been released in regional market. However, Thai Facebook users have captured it rolling wheels in the neighborhood to prepare for its official introduction.

According to Chobrod.com - a Thai auto portal, several Thai accounts have seen Camry 2019 on road, looking identical to available versions in other markets. It was once rumored that Toyota would produce a different variant for ASEAN region. 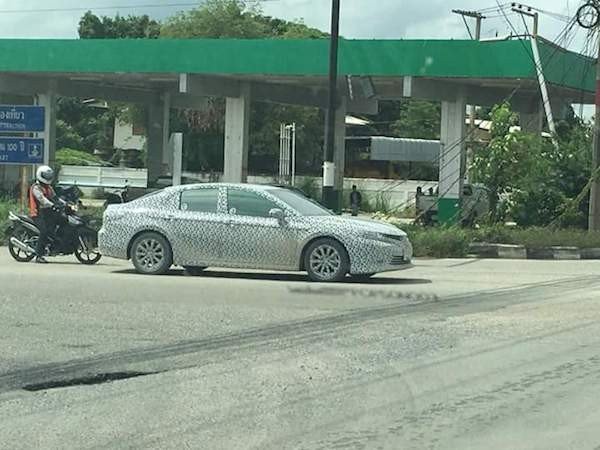 Spyshot of Toyota Camry 2019 in Thailand from Facebook users

However, the photo shows that the model is covered in camouflage, that’s why it’s hard to say for sure whether regional variants will be the same or have slight modifications compared to other countries. Overall, a quick look through its body, we can see that this sedan will have a sportier look, slim headlights and roofline in sweeping style.

Official information regarding its engine has yet been announced, either. Two available options in the US and in Australia is 2.5L Dynamic Force engine and 2.5L type respectively.

Following the debut of Toyota Camry 2019 is expected the introduction of Camry Hybrid which uses 2.5L mills and electric motors, reaching 214 hp at max.

While waiting for further updates, let's refer to the table below for the latest price of the Toyota Camry currently marketed in the Philippines: