In both models, a new 8-speed Steptronic sports transmission is fitted as standard, including the mechanical differential lock on the front axle, and ALL4 all-wheel-drive system, a specifically engineered chassis, and additional reinforcement modifications for the body structure, engine connection, and chassis fastenings. This enables the John Cooper Works racing sensations to attain a completely new dimension of performance.

Both the individual six-door model with its extreme driving fun and the robust all-rounder provide challenging performance experience. The latest generation of the 4-cylinder engine developed for the John Cooper Works models with MINI TwinPower Turbo technology surpasses that of the previous drive by as much as 75 hp at maximum output. Maximum torque has increased by 100 Nm to 450 Nm, and acceleration performance has also risen commensurately. The new MINI John Cooper Works Clubman turns in an acceleration of 0 to 100 km/h in 4.9 seconds, with the new MINI John Cooper Works Countryman achieving the same in 5.1 seconds – 1.4 and 1.5 seconds faster than in the previous models respectively.

As the power source for extreme driving fun, the comprehensively redesigned 4-cylinder engine has been consistently oriented towards the maximum output.

The 4-cylinder engine has been completely redesigned to deliver maximum performance thanks to model-specific modifications to the crankshaft drive and a new vibration damper with optimized cooling.

The considerably increased output compared to the previous engine is also helped along by the bigger turbocharger, with a reduction in compression ratio from 10.2 to 9.5 to match the increased system charging pressure.

In addition, the turbocharger integrated into the exhaust manifold is fitted with a blow-off valve that contributes to its optimized response characteristics. The air intake duct has also been redeveloped and dethrottled as far as possible. The fine vaporization enables precise metering of the fuel, which makes for especially clean combustion in addition to enabling optimum efficiency. The MINI TwinPower Turbo technology also includes fully variable valve control along the lines of the VALVETRONIC system patented by the BMW Group, as well as variable camshaft control on the intake and exhaust sides (double VANOS).

The high-performance drive of the new MINI John Cooper Works Clubman and the new MINI John Cooper Works Countryman generates a maximum torque of 450 Nm in the broad engine speed range between 1,750 and 4,500 rpm, which is around 29 percent higher than that of the previous engine. The maximum output of the new 4-cylinder engine has been increased by approximately 32 percent.

The new top-level of 306 hp is reached between 5,000 and 6,250 rpm. The resulting pulling power enables the new engine of the MINI John Cooper Works Clubman to produce an acceleration performance of 0 to 100 km/h in 4.9 seconds, while the figure for the new MINI John Cooper Works Countryman is 5.1 seconds. For the first time with MINI vehicles, the maximum speed of the new top sports performer is now electronically limited to 250 km/h. Speed burst maneuvers are accompanied by the striking sound of the newly developed, model-specific sports exhaust system. The extreme output of the engine makes itself more intensively felt than ever before, with an emotionally charged acoustic design that matches the load requirements while underlining its performance character.

The twin exhaust system leads into a new, particularly large-volume rear silencer – with its low level of exhaust backpressure, this benefits the engine’s spontaneous power delivery. The external diameter of the tailpipe trims integrated into the right and left of the rear apron is 95 millimeters for the new MINI John Cooper Works Clubman and 85 millimeters in the new MINI John Cooper Works Countryman.

The transverse-mounted front engine in both of these extreme sports vehicles transmits its phenomenal power to the 8-speed Steptronic sports transmission. The latest generation of the transmission features enhanced internal efficiency and an extended steering axis inclination – this contributes to lower engine speeds when driving in a higher gear, which in turn translates to lower fuel consumption.

A new transmission control increases both the gear shift dynamics and driving comfort, and shift paddles are mounted as standard on the steering wheel for manual gear selection. Moreover, the 8-speed Steptronic sports transmission offers Launch Control for accelerating from standing with optimum traction and maximum dynamics. 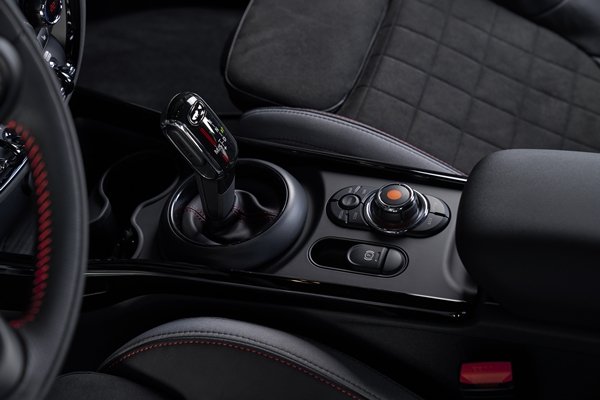 The new automatic transmission also features an integrated differential lock – it functions transversely to reduce the speed compensation between the front wheels. Under load conditions, this means that a locking effect of up to 39 percent can be generated.

The differential lock supports the vehicle’s agility when changing direction quickly or accelerating dynamically out of a bend, by applying targeted shifting of the drive torque.

ALL4 all-wheel drive with model-specific components

The standard ALL4 all-wheel-drive system plays a central role in optimizing the cars’ traction, agility and driving stability. The intelligent controller of the ALL4 system is interconnected with the DSC Dynamic Stability Control and constantly calculates the ideal power distribution ratio between the front and rear wheels. 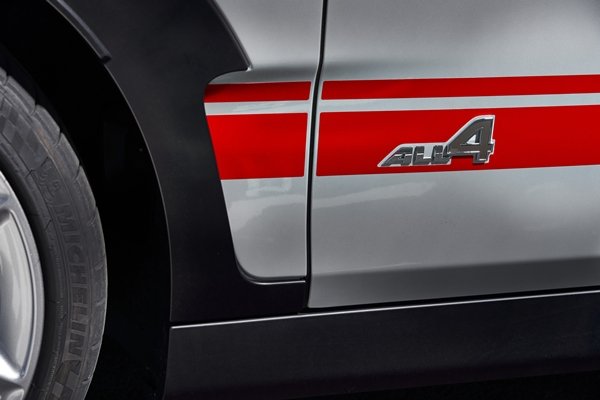 The standard ALL4 all-wheel-drive system plays a central role in optimizing the cars’ traction, agility and driving stability

In normal driving conditions with the DSC activated, it transmits the drive torque in the brand typical manner to the front wheels. This allows the engine power to be converted into forwarding propulsion with maximum efficiency.

But if the DSC controller detects a danger of slip on the front wheels, within a fraction of a second, the hang-on clutch will transfer the drive torque to the rear wheels with the aid of an electrohydraulic pump.

>>> Check out: Front Wheel, Rear Wheel or All-Wheel drive: Which is better?

The chassis technology of the new MINI John Cooper Works Clubman and the new MINI John Cooper Works Countryman has also been enhanced to a new level of performance. Newly designed swivel bearings enable improved camber values on the front wheels. Moreover, the readjusted suspension and damping systems, the DSC and the electromechanical steering are precisely oriented towards the extremely agile character of the new top sports model.

The new MINI John Cooper Works Clubman features a sports suspension, while the new MINI John Cooper Works Countryman features an adaptive chassis with electronically controlled dampers. Judder dampers operate in line with a choice of two characteristic diagrams, coordinated for either sporty or more comfort-oriented driving scenarios; these can be activated in the MINI Driving Modes. The sport brake system has also been redesigned and now contains 4-piston, fixed-caliper disc brakes on the rear wheels to ensure constantly high braking values even under intensive use. The large brake discs of 360 × 30 millimeters at the front and 330 × 20 millimeters at the rear combined with optimized coolant duct geometry also play their part in achieving the high level of stability. 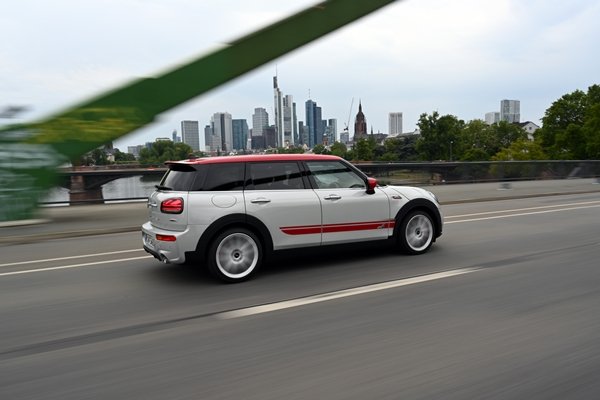 The long wheelbase, large track width and low center of gravity that both models display are ideal for chassis design

Both models possess a newly developed precision strut for the engine compartment, which connects the right and left spring strut domes. The bracing of the front end is provided by specific arrow struts and a dome-bulkhead strut in the undercarriage.

Model-specific design features in the exterior serve to optimize the vehicles’ aerodynamic features and air duct design. For example, the large air inlets on the front of the vehicle serve the cooling requirements of both the drive and the brake system. In addition, the outstanding performance characteristics are reflected in the model-specific design of the side skirts and the independent rear aprons with integrated diffuser elements.

Other model-specific accentuations in the exterior include the contrasting paintwork in red for the roof and the mirror caps, an individual design for the side scuttles by the additional indicators and the John Cooper Works logo in the radiator grille and tailgate. Both models also feature a panoramic glass sunroof. The central air inlet of both models has a honeycomb pattern structure, while the inlet of the MINI John Cooper Works Countryman also has a red surround.

On the new MINI John Cooper Works Clubman, a red cross-member subdivides the newly designed radiator grille. Its adaptive LED headlamps with Matrix LED Headlight Technology, rear lights, and the aerodynamic kit also display the new design of the latest model revision for the MINI Clubman. The racing sensation has been elevated to new dimensions, which can be enjoyed on the car’s five full-feature seats. 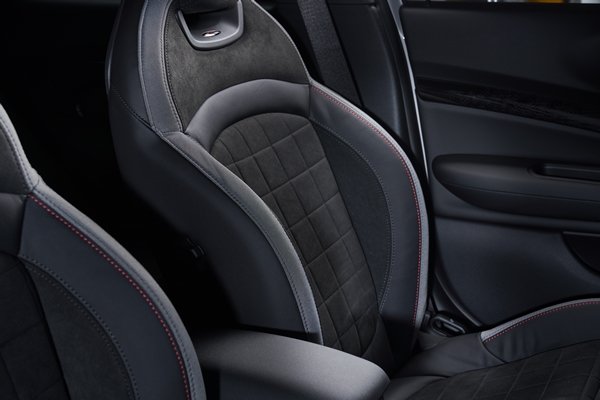 The Park Distance Control system in the front and rear plus a rearview camera enables fuss-free parking. The Parking Assistant function is particularly helpful as well – when the driver goes slowly past the parking lot, the available space is automatically measured via ultrasonic sensors and shown in the Control Display.

All the driver needs to do is to engage the reverse gear and indicate the turn signal in the direction he wants the car to steer into – the Parking Assistant then takes over the steering and the driver just needs to control the speed of the car. The system also monitors the surrounding area via the ultrasonic sensors and emits acoustic and visual warning signals if the driver is too close to another car or object.

Follow Philkotse.com to catch up with the latest auto industry news!