The first teaser video of the Mercedes X-Class pick-up truck has been officially released.
Sharing components with the Nissan Navara pick-up and Renault Alaskan, the X-Class is Mercedes-Benz’s first ever pick-up truck model. Actually, we used to admire the concept version of this pick-up in October last year and recently, the German luxury brand has given the world the first glimpse at official version of its forthcoming X-Class. The X-Class is Mercedes-Benz’s first ever pick-up truck model
>>> Read more: 2018 Mercedes-Maybach S650 to be gifted with an AMG V12

Up front, the X-Class gets a GLS-style grille with prominent horizontal bars, LED headlights, a tall hood and a front bumper with a silver skid plate. Moving further back, the pick-up features curvaceous bodywork, metallic window trim along with a new set of alloy wheels. At the rear, it comes with bulging fenders, vertical LED tail lights and chrome door handles. 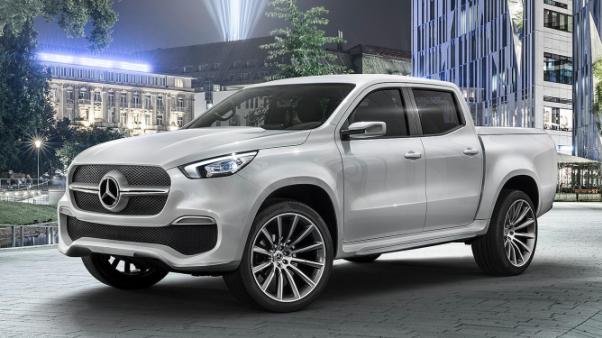 >>> Aston Martin now announces that this is the first time the brand co-operates with Mercedes to reveal the Aston Martin DB11 V8. Click here for more details.

Mercedes will get its X-Class pick-up truck to market on July 18. Once launched, it will duel with the likes of the Ford Ranger and Volkswagen Amarok.

Now, take a look at teaser video of the Mercedes-Benz X-Class pick-up.