The Mercedes-Benz S-Class Cabriolet is scheduled to be unveiled at the forthcoming 2017 Frankfurt Motor Show this September. To arouse the curiosity of cabriolet fans, the German car manufacturer has released a teaser video giving us an overall preview of the luxury convertible.

In soothing music, the S-Class Cabriolet seems to be more beautiful than we can ever imagine. It’s still a luxury and elegant look of a Merc, but the updated cabriolet now receives revised headlamps and taillights, a bigger front grille with a three-pointed star badging, a sleek wing mirror and a retracting roof as well. On the inside, we merely spot that the S-Class is fitted with cream leather seats. For a closer look, we must wait for the wraps to be come off at Frankfurt on September 12. 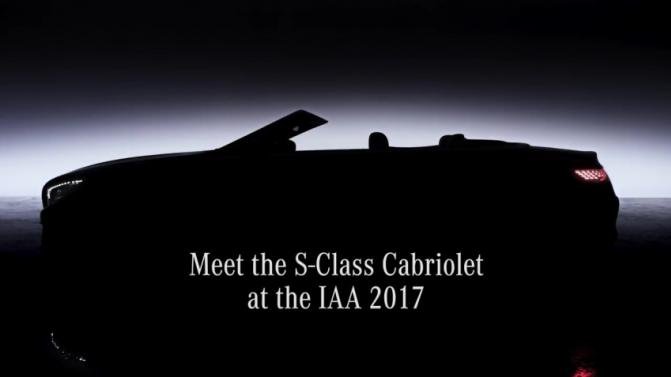 With regards to the powertrain, the S-Class cabriolet will probably be equipped with a 3.0L turbocharged inline 6-cylinder petrol engine like the S 500 sedan. Further, like the sedan, the powerplant will likely come with a 49-volt integral starter/alternator, which gives an additional 21 hp and 250 Nm of peak torque.

Safety and comfort-wise, the convertible will feature an expanded Intelligent Drive suite of driver assistance systems. It’s also expected that Mercedes-Benz’s Energising comfort control will be present in the cabin.

Along with the S-Class Cabriolet, the C217 S-Class Coupe, the Mercedes-AMG Project One, the GLC F-Cell EQ Power and an EQ compact concept will also make presence at Frankfurt. Just stay tuned!

>>> Mercedes-Benz has confirmed that the company will keep on using V12 engine. Read full our article for more details.