Apart from its engine, the RX-7 FD’s design is also timeless.

While the Philippines and many other countries didn’t officially receive the Mazda RX-7, the badge still carries gravitas in the hearts and minds of many car enthusiasts all over the world. And yes, it has appeared in countless media from Initial D to Fast and Furious, among other TV shows and movies. So, there’s little doubt that it is a very famous Mazda model. So, what does the car have to deserve such fame? Well, let’s talk about that.

Ever since the first-gen SA22C RX-7 model came out in 1978, the Mazda sports car has always used a Wankel rotary engine. This of course meant that the RX-7 wasn’t just unique in its style, but was also in a league of its own when it came to mechanicals.

For those unaware, a Wankel rotary engine is a type of engine that uses a triangular-shaped rotor instead of the traditional reciprocating piston found on the more common inline and V-layout engines. The said triangle rotor spins the driveshaft by rotating from a fixed gear in the middle of a chamber. As it rotates, the rotor opens and closes an intake port, creating a vacuum which draws in air-fuel mixture from the said intake port. The air-fuel mix is compressed then ignited by spark plugs. And finally, exhaust is expelled by the rotor through the exhaust port.

In the case of the 13B-REW on the third-gen RX-7 FD, the said engine has two rotors. This enabled the engine to push exhaust out just as it brings in air and gas, while combusting the air and gas mixture introduced earlier in the cycle. All three processes are done simultaneously resulting in even power delivery, as well as better packaging. 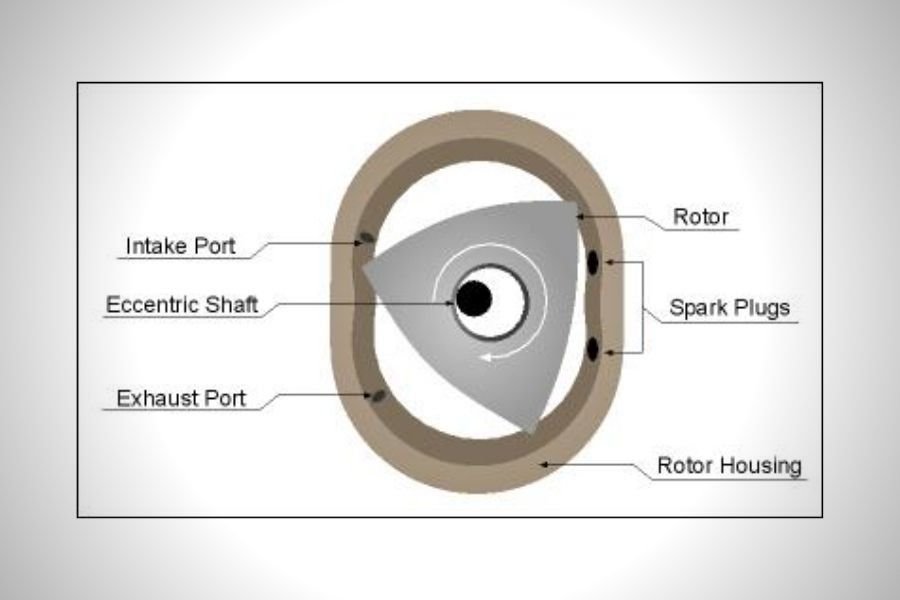 Of note, a rotary engine doesn’t need a timing belt, and by not having reciprocating components, it can be built with a more compact form factor. So, while the 13B-REW's 1.6-liter displacement is tiny compared to contemporary sports cars, the said engine could still make up to 252 horsepower. In 2002, when the RX-7 was on its last legs as a model, Mazda even managed to squeeze more out of the 13B by making it produce 276 horsepower. That’s an amazing amount of power for an engine that can fit inside the front cabin of a Mazda2.

To the enterprising motorsports engineer or car modder, this meant that the RX-7 naturally has less unsprung weight, and more space in its engine bay to tuck in more turbos. This resulted in the RX-7 being popular in many racing events. One of these was of course Le Mans, and the US International Motor Sports Association races in the 1970s to the 1990s, where the RX-7 GTO won a whopping 100 times. Some even managed to build four-rotor setups resulting in even more oomph. Case in point is Rob Dahm’s 4-Rotor RX-7, David Mazzei’s RX-7, Mike Whiddet’s RX-7, etc. And of course, Mazda itself made the 4-Rotor 26B, which powered the 787B sports car. Of note, this car was the first ever Japanese-made car to win the 24 Hours of Le Mans in 1991.

Lastly, rotary engines by their nature of operation can also have significantly higher RPM limits. This results in very interesting exhaust notes that will make any gearhead’s ears tingle with excitement.

Apart from the unique powerplant, the RX-7's styling also contributes much to its timelessness. Sure, the first-gen versions very much resemble a somewhat more angular C3 Corvette, but the second- and especially the third-generation RX-7's exterior designs were more unique. For the second-gen, the RX-7 took inspiration from the Porsche 944 and 924 with its pop-out headlamps, and long-ish hood. The SA22 turbo variant is particularly stylish with its hood scoop.

Then of course, there’s the third-gen version released in 1992. It was curvier than its predecessor, and it definitely had the stance of something from the future. And of course, it still had the iconic pop-up headlights, but added to that was a significantly sized rear wing.

The future of the RX-7 and the rotary engine

With the RX-8 released, the RX-7 was discontinued in 2012. Since then, Mazda had made known to the world that it wanted to release another RX-7 successor, but to this day, we are still waiting. Sure, the Mazda MX-30 hybrid crossover did get a rotary engine in 2020, but that merely functions to extend the model’s electric driving range. Mazda might be working on a new sports car. Hopefully, its a proper nod to the RX-7 [Photo source: Mazda USA]

Then again, the RX-Vision concept car is still a thing, and who knows what Mazda can cook up by using the aforementioned as a basis? For now, though, we’ll fondly remember the RX-7. Or maybe, we can even gawk at the several ones that are still running around the world today. And yes, there are a few RX-7s in the Philippines that are proudly maintained and driven on public roads by their loving owners.