Ford Ranger 2018 facelift receives new EcoBoost engine in the US

Here is information about the US version only.

Recently, the Ford Ranger 2018 facelift has officially been revealed in the US. In this market, the new Ranger will be available in four variants totally with two body types: the XL, XLT, Lariat series with FX Off-road packages along with Chrome & Sport appearance, and in SuperCrew and SuperCab configurations. Up to present, only the Ford Ranger FX4 Off-road package has been unveiled.

For starters, the Ford Ranger exterior is now revamped with a new two-bar front grille surrounded by revised headlamps as well as refreshed bumpers. In particular, the US-mode will come with different set of lights. Please note that these are about the US-spec appearance; for other markets, all have remained secret for now. Back in last week, we admired the facelifted Ford Ranger surfaced on the Internet. Called the Limited, that car has the same grille as the US-spec FX4 but with more added chrome detailing. It also shares some components with the outgoing Ranger like the bumper corners and taillights. While the US variants have been revealed already, it is highly likely that this Limited would be made for Australian and Asian markets.

Moving inside, the Ranger interior fairly resembles the Everest’s. Outstandingly, the passenger side trim piece is now attached with Ranger name. In the meantime, the steering wheel looks more angular with several located buttons while the gear selector is also redesign to have a capacity for a touch-shift manual mode.

The US-mode will come with different set of lights

The powertrain is where the changes occur most. In the US market, the Ford Ranger 2018 facelift will pack a 2.3L 4-cylinder EcoBoost turbocharged gasoline mill used in the Ford Explorer, in lieu of a turbo diesel. No words on the exact output produced but it’s expected to range between 260 PS and 300 PS. The new engine will come paired to a 10-speed automatic gearbox. 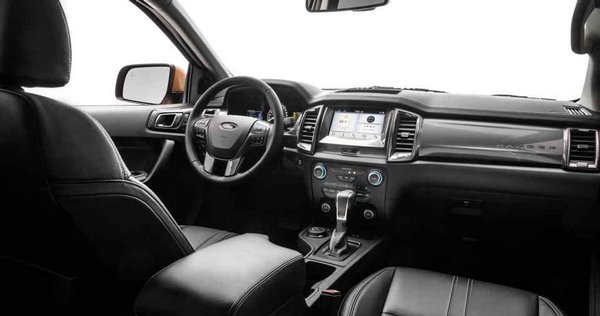 Moving inside, the Ranger interior fairly resembles the Everest’s

According to latest car news, the refreshed Ranger also shares the Terrain Management System and more latest techs with the Everest, in which worth mentioning is the Trail Control package for better off-road credentials.

In the end, while the new Ranger 2018 is still something vague, you should turn your attention to the Ford Ranger Rapter 2018 which will be debuting in Thailand next month.

Let's have a peek at the latest Ford Ranger 2018 price in the Philippines below: