There are too many upgrades and revisions in this 6th-gen pony car.

Recently, Ford Australia has confirmed the arrival of the Ford Mustang 2018 facelift in the middle of 2018. As claimed by the Blue Oval, the 6th-generation refreshed S550 Mustang will come with a bevy of refinements for its mid-cycle update.

For starters, the exterior makeover includes a refined front grille, a revised and lower hood together with repositioned air intakes. Coming as standard is full-LED front lighting from LED projector main lamps, to fog light cluster and turn signal. Moving backwards, the rear car is dominated by a new rear bumper, LED taillights and a performance rear spoiler. In particular, the exhaust tip arrangement is also re-profiled with a quad-tip for the GT trim, dual tips for the EcoBoost and a black rear diffuser.

While the Ford Mustang EcoBoost is adorned with a new factory-fitted set of 19-inch Lustre Nickel alloys, the GT model remains the familiar mesh design from the outgoing Mustang and at the same time, receives an optional set of 5-spoke 19-inch forged wheels.

In Australia, the Mustang 2018 is available in convertible and fastback body configurations

Interior-wise, the Mustang’s cabin exudes a more luxury feel and look owing to a wide array of modifications. Specifically, the center console becomes more eye-catching with a new hand-stitched wrap with outstanding stitching in addition to padded knee bolsters. In the meantime, rings, bezels and door handles are gilded with aluminum. As well as that, seating surfaces are also decked with new patterns. Notably, 6-way leather Recaro sports seats are offered as an option. What’s more is that you can even adjust the exhaust note on the Mustang GT thanks to an active valve exhaust system. 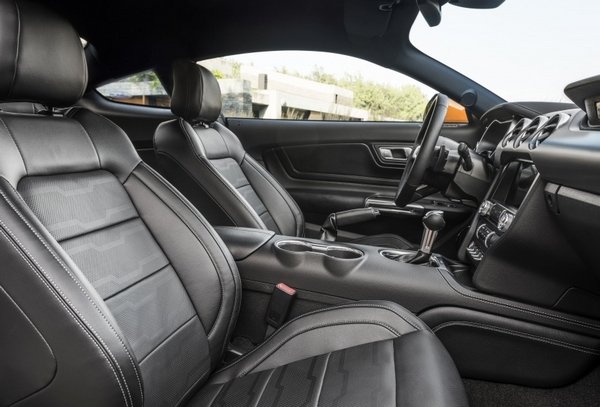 With regard to entertainment source, beside an 8.0-inch touchscreen for Ford’s signature SYNC 3, a larger 12-inch digital LCD instrument cluster is in charge of displaying color and gauge layout settings alongside different drive modes (Normal, Track and Sport). Plus, a MyMode function is likewise on tap for favorite drive setting inclusive of steering and suspension preferences.

In Australia, the Ford Mustang 2018 facelift is available in convertible and fastback body configurations and is propelled by 2.3L EcoBoost and 5.0L V8 engines. Concerning the output, the bigger 5.0L Coyote engine can muster up to 556 Nm of torque and 454 hp. On the other hand, power output in the EcoBoost trim is just limited to 300 hp because of an added measuring system. Thankfully, the engine presently gives more torque: 441 Nm versus 434 Nm of the pre-facelift version. The sports car is propelled by 2.3L EcoBoost and 5.0L V8 engines

In the refreshed pony car, ride and handling are further enhanced due to a number of significant improvements on the chassis, brakes and suspension system. Customers can also opt for a new MagneRide damping system.

>>> Click to keep updated with latest car news in the world