There will be at least a new grille and redesigned taillights.

It has been 15 years since the Honda Pilot was first introduced and the 3rd-iteration model has been around on the market for 2 years. Now, it seems that the Japanese carmaker has decided it’s time to give the three-row SUV a nip and tuck for 2019 because some sneak peeks of refreshed Honda Pilot 2019 wearing camouflage have surfaced recently. 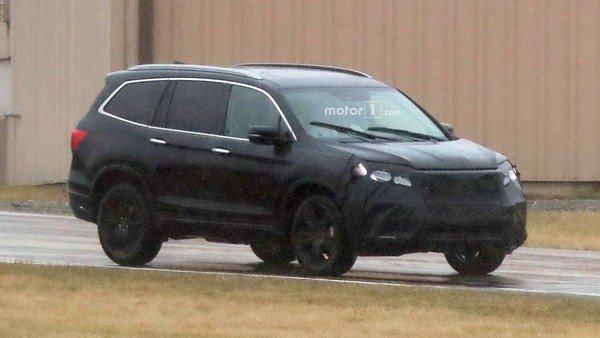 Despite for camouflage, it is expected that there will be a new grille underneath

Although the cladding has concealed most of the SUV’s front fascia, it is still expected that at least there will be a redesigned grille. Partially covered up at the rear are the taillights which are believed to get some tweaks, too. According to latest car news, the refreshed Pilot will be reminiscent of the Accord sedan in terms of exterior design. Inside, there might not be significant updates. The current-gen Pilot is already equipped with an 8-inch infotainment touchscreen with Android Auto and Apple CarPlay compatibility.

While the body mostly stays unchanged, the revamped Honda Pilot 2019 is likely to receive some refreshment in terms of powertrain. In detail, similar to the Odyssey, the revised Pilot 2019 could be added with a plug-in or hybrid option with 2-motor engine borrowed from the Accord Hybrid. Meanwhile, the standard variant should still stick with the same 3.5L V6 engine equipped for the current offering. Speaking of the existing Pilot, it is powered by a 3.5L V6 with Variable Cylinder Management which is able to deliver 280 hp and 355 Nm of torque. While the top-spec Touring and Elite models are mated to a 9-speed transmission, most variants come with a standard 6-speed automatic gearbox.

As per Honda’s plan, the updated Honda Pilot 2019 will make its official premier some time this year and be available for sale as a 2019 model year. It is also rumored that a smaller version with short wheelbase dubbed as Passport might come as an addition to the Pilot lineup. Let’s wait and see!

In the Philippines, the Honda Pilot 2018 can be had at P3,385,000. In comparison with its 2017 SRP, the SUV remained unchanged in terms of price despite the new excise taxes. Latest updates on upcoming Honda cars can be found in our Complete guide to the Honda Philippines' local lineup.