All new Toyota Vios 2018 to arrive in India next year

Petrol is the only engine option.

The all new Toyota Vios 2018 will officially be launched in India next year. Coming to Indian market for the first time, the Vios 2018 model year will allegedly feature a wide range of cosmetic refinements. According to latest car news, the Toyota Vios will only be a petrol-powered model in this market. Toyota Vios 2018 will officially be launched in India next year

In truth, the Vios is a C-segment sedan which is set to take on players like the Hyundai Verna, Honda City and the Maruti Ciaz (Suzuki Ciaz). However, the new Vios, unlike its rivals, will not come with diesel engines. Concerning the reason, it’s simply because Toyota has sold the Vios as a petrol-only vehicle globally. Besides, adding a diesel engine to this sedan will result in numerous changes in the hardware. High cost is also an additional reason. The 2018 Toyota Vios has undergone profound tweaks on the outside

For Indian market, the all new Toyota Vios 2018 runs a 2NR-FBE 1.5-liter dual VVT-i petrol engine, which can produce 108 bhp at 6,000 rpm and a peak torque of 140 Nm at 4,200 rpm. Formerly, the India-spec Toyota Vios only packed a 1.4-liter I4 turbo-diesel engine capable of cranking out 68 bhp and 170 Nm of torque. The Japanese car manufacturer also equips this kind of engine for some B-segment models such as the Etios Liva hatchback and the Etios sedan. Currently, the engine is expected to be paired with either a CVT automatic transmission or a 5-speed manual. The side profile is sleeker with new wheels

In terms of exterior, it is clearly that the all new Toyota Vios 2018 has undergone profound tweaks, especially in the front fascia. Accordingly, the hot sedan is given new front grille flanked by new head lamps with LED daytime running lights, large air intakes and more alluring fog lamps. At the back, catching much of our attention on the luggage compartment lid is the familiar inox bar found in the previous Vios in addition to youthful and modern taillights design. The side profile is sleeker with new wheels. 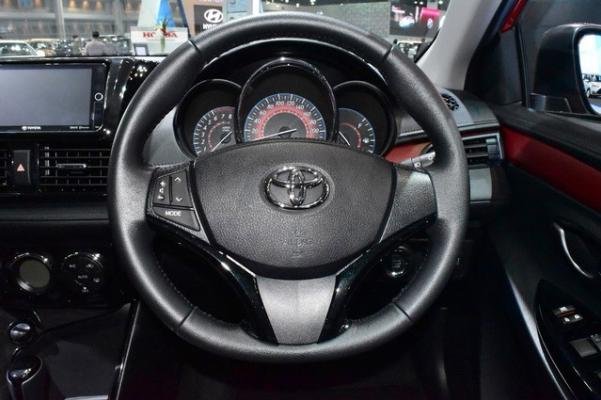 The cabin is still unchanged

The Vios interior reflects no alterations.

The Toyota Vios 2018 price has remained secret, but the release date has been announced. Specifically, the sedan will wing its way at the 2018 Auto Expo on February 9. So stay tuned!

Below are the current prices for the Toyota Vios 2017 in the Philippines: