Is this a worthy successor?

If you’ve been keeping up with the latest automotive news, then you’ll know that the all-new Ativ sedan was already revealed in Thailand. This model previews the next-generation Toyota Vios which will eventually reach other markets including the Philippines.

Aside from the new exterior and interior styling, the next-gen Vios is underpinned by a new platform. So, this brings us to the question, how does it differ from the current model sold in the Philippines? Let’s find out. How does the old Vios compare to the new one that was released in Thailand?

For the front, the old Vios, which was given a facelift in 2020, comes with a pair of swept-back headlamps with integrated LED daytime running lamps. It also sports a grille that mirrors the look of the Lexus spindle-style grilles, as well as front fog lamp houses similar to those found on the Corolla Altis. The new one, on the other hand, is fitted with a larger grille that comes in an isosceles trapezoid shape. Its headlamps are still seamlessly fused together with the LED daytime running lamps, though these are shorter and more angular compared to the current Toyota Vios sold in the Philippines. 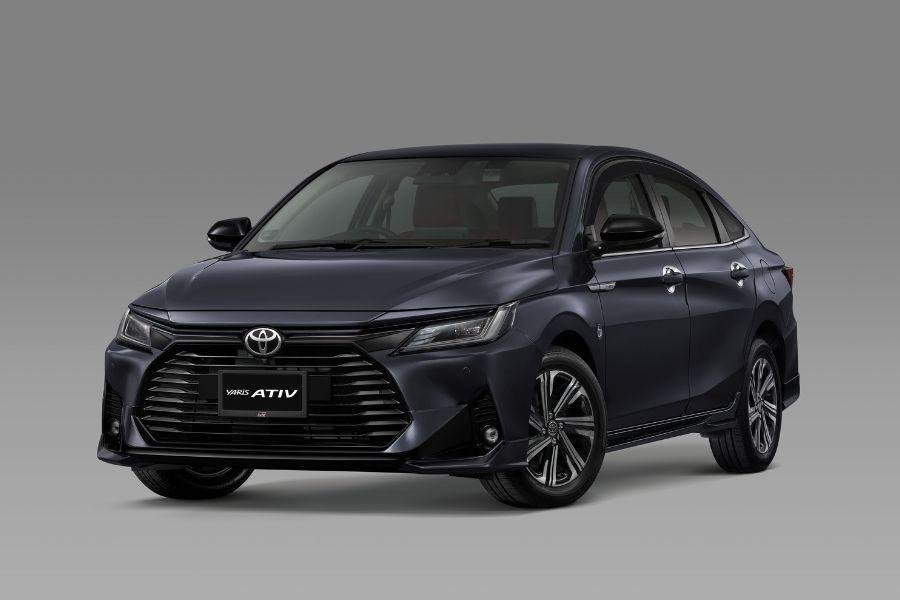 The 2023 Toyota Ativ which previews the future Philippine-spec Vios

Towards the sides, one can see that the old model comes with the typical sedan silhouette. The new one meanwhile, assumes a fastback shape.

The new model also gets a pair of boxier-shaped LED taillights, which are a bit more angular compared to the tear-shaped ones on the old Toyota Vios for sale in the Philippines. The old Vios from the rear

For wheels, the old Vios G variant rides on a set of 16-inch alloy wheels. The new one meanwhile still retains a 16-inch set, though these come with a more contemporary two-tone design. Inside, the new Vios (Ativ) now sports a revamped interior design. It is significantly sleeker-looking compared to the old Vios’s interior, and it appears roomier as well. Like the old model though, the new one still has fabric seats for the lower-spec models, and leather-wrapped seats for the higher-spec trims. On the top-spec trims though, the Ativ (Vios) does look a bit more premium compared to the old Vios since it looks like it has more soft-touch surfaces.

Unlike the old model, the new one gets 60:40 split folding rear seats. This means easier cargo loading and better utilization of space. For entertainment, the old higher-spec Vios trims are kitted out with a 6.75-inch display headunit with Apple CarPlay, Android Auto, USB, and Bluetooth connectivity. It is then linked to six speakers.

Compare that to the new 2023 Toyota Vios model, which now comes with a larger 9-inch headunit. It also offers Android Auto and Apple CarPlay, as well as Bluetooth and USB connectivity. The 6.75-inch headunit on the old Vios G

Like the headunit on the older model, the larger headunit on the newer Vios is also linked to a six-piece speaker system. It is, however, a floating-type touchscreen positioned on top of the dash. This might mean that it can provide easier reach and visibility compared to the old headunit that was situated a bit farther down. The new 9-inch floating-type touchscreen on the new model

The new model though, does add on to those with several driver assist features. These include a pre-collision alert system, adaptive cruise control, lane departure alert, among others.

Under the hood, the old Vios either used a 1.5-liter or 1.3-liter engine. Both are gasoline-powered, and both are four-cylinders. Likewise, the Ativ (Vios) is a front-engine, front-wheel-drive model. At least for the Thai-spec model though, it seems that Toyota did away with either of the two engines mentioned above, and instead opted for a smaller 1.2-liter four-cylinder gasoline engine.

At the most, this can produce 94 horsepower and 110 Nm of torque. This means that it is less powerful than either of the old Vios’ powertrains.

Also not present on the new Vios is a manual tranny. Instead, it exclusively uses the new “Super CVT-I" that comes with a sequential shift manual mode. As mentioned in the premier article of the 2023 Toyota Ativ, there’s no word yet as to when Toyota Motor Philippines will launch it as the Vios in the market. But if you want to catch more updates on this upcoming model, keep it here on Philkotse.