[Auto Brawl 101] Xpander vs Rush: Who takes the crown?

Mitsubishi Xpander and Toyota Rush have re-shaped the local automotive market. With families opting for larger vehicles, which if these 2 cars: Xpander vs Rush will reign supreme?

1. Xpander vs Rush in the Philippines: Overview

More than a year into their introduction, the Mitsubishi Xpander and Toyota Rush have proven to be their respective companies’ best sellers. Who would have had thought that Filipinos love to travel in large groups while driving with a commanding view of the road? If there was one thing that the Filipino market has proven, we love ourselves some seven-seater SUVs that come in an affordable and stylish package. Now that we’ve had some time to acclimate ourselves with these two models, it’s time to take a closer look at this rivalry and find out which is best for you. And if you’re looking for the best seven-seater options for your family, just hop on over to our SUV for sale list and browse through our accredited dealerships, so you can drive home with your brand-new or used car! The Mitsubishi Xpander goes head-to-head with the Toyota Rush

It's worth to read our full-scale Battle Royale between Mitsubishi Xpander vs Toyota Rush, brought by Philkotse.com to see which wins out!

Let’s talk about their looks, right off the bat. The Xpander and the Rush undoubtedly compete in the same segment, but their design execution has never been so far apart. Which design does philosophy reign supreme?

On one hand, the Toyota Rush aims to look like a mini Fortuner, with strong, bulging fenders and a raised hood line that evoke an SUV character. Plastic cladding on the edges of the wheels arches and side skirts further cement its rugged aspirations. Viewing it from upfront, you’ll see more of the design inspiration taken from the Fortuner with its sharply-raked headlamps and triangular grille.

The Toyota Rush also sports a rugged-looking skid plate, and chunky 17-inch alloy wheels paired with 215/16 R17 radials, enabling it to put the “sport” in subcompact sport-utility. Park the Rush alongside midsize and even full-size SUVs in a parking lot, and it wouldn’t feel out of place. The design is just one of the factors answer why the Toyota Rush is a good buy in 2019. 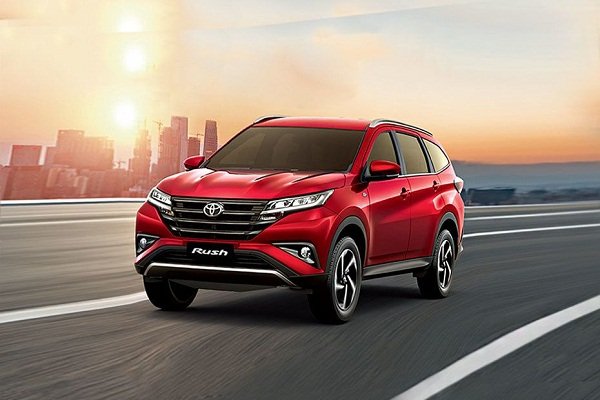 In contrast to the more traditional and rugged look sported by the Rush, the Mitsubishi Xpander takes the opposite route with a more post-modern design. Mitsubishi’s contender adopts a more unibody design that is seamlessly executed around the vehicle’s most prominent styling element, the Dynamic Shield. Although you can say that the front looks a lot like its Strada and Montero Sport stablemates, the overall implementation is quite different. For one, it takes cues from the Nissan Juke, particularly in how the headlamps are located on the bottom part of the bumper. The front wheel arch that shrouds 16-inch wheels mounted on 205/55 R16 tires is more prominent, with its body lines flowing all the way to the back.

The way the tail lamps were implemented on the Xpander could very well be a source of envy among Montero Sport owners, as it seems to work so much better on the smaller model. The sheer uniqueness of the Xpander’s design gives this round to Mitsubishi.

WINNER: This was really close, but the Mitsubishi Xpander takes first blood!

>>> In-depth review for each model can be found at:

A car’s interior is my favorite part; it’s where you spend most of your time with a car, and however a car looks on the outside, a well-designed interior can lend inspiration to one’s driving style. Just like their respective exteriors, the Rush and Xpander offer similar amenities on the inside. The difference is simply in the way they executed the cabin. Can the Toyota Rush make a comeback in Round 2?

Inside the Mitsubishi Xpander, you will be greeted with a contrasting gray and black motif on the seats, dashboard and side panels, topped off by an all-beige ceiling. The seeming clash in colors might turn off some, but all these seemingly fade into oblivion with one glance at the dashboard, which Mitsubishi fabricated in a way that looks airy and striking at the same time.

From the door lines, you’ll see the front fold and arch around the center console coming together to create a cockpit-like atmosphere that helps create the illusion of space and makes your everyday drive engaging. Buttons on the leather-wrapped steering wheel let you take control of the infotainment system’s 7-inch capacitive touchscreen with built-in navigation on the top-spec trim.

It doesn’t seem to have Apple CarPlay or Android Auto, which is a shame, but at least it comes with smartphone screen mirroring which I think is the next best thing. >>> Read more: Best Toyota Rush Accessories in the Philippines to modify your vehicles

While space is indeed the Xpander’s strong suit, with seating comfortable enough for seven normal-sized adults, it’s the best asset is its flexible seating options; folding the third-row seats flat dramatically increases the already generous cargo bay, and the second-row seats can also be tucked down for maximum cargo carrying capacity.

In terms of amenities, there are cupholders for passengers at the rear as well as a second set of air-conditioning controls. Six speakers all around the cabin keep everyone entertained, no matter how long the journey takes.

Meanwhile, the Rush has its own take of what a subcompact SUV should be on the inside, and unlike the Xpander, it believes in simplicity. There’s no line or design detail out of place, and Toyota seems to favor a more utilitarian approach. If you want an interior that’s easy on the eyes, with nothing to distract you from driving, the Rush might be right up your alley.

Toyota Rush exterior may not be as flashy as the Xpander’, but there is something to be said in it being a bit more driver-centric. Similar to Mitsubishi’s setup, Toyota eschewed popular smartphone integration formats on its head unit, going instead with its own proprietary system. Is this...spartan? The Rush interior isn’t as flashy as the Xpander’s

Interior space and seating are similar for both models, but what hobbles the Rush is that its rearmost seats don't fold as flat as they do on the Xpander. In terms of interior design philosophy and versatility, we’ll have to give this round to the Xpander.

WINNER: The Mitsubishi Xpander hits a 1-2 combo punch with its interior.

The Mitsubishi Xpander and the Toyota Rush represent two sides of a coin. Apart from their exterior and interior differences, even the way they drive is practically worlds apart. Find out how these cars handle and perform in our next test.

The name Rush may connote images of speed, but its actual straight-line acceleration falls quite short. Powered by a 1.5L 2NR-VE DOHC VVTi engine that makes 104 hp and 136 Nm of torque, the Rush does 0-100 kph in a leisurely 13 seconds, with a top speed of 175 kph. Nevertheless, this front-engined, rear-wheel-drive model uses a solid rear axle and multi-point suspension for balance in taking on corners, making it a sporty gem at its price point. While there’s still noticeable body roll, Toyota Rush 2019 does stay quite compliant on the road, while the RWD configuration delivers a kind of sportiness you can feel by the seat of your pants. Thanks to its electric power steering system, threading the Rush in small spaces such as parking lots is a breeze.

In an era of continuously variable transmissions and multi-gear slushboxes, the four-speed automatic on the Rush is a bit behind the times, but it’s generous with the knockdowns while still returning 8.5 kilometers to the liter in city driving. Toyotas have been known for capable and reliable four-speed automatics, so there’s no need to fix what isn’t broken, for now. The 1.5L 4A91 DOHC engine under the hood the Xpander

The Xpander offers a similar 1.5L 4A91 DOHC engine with a slight advantage in overall output, putting in 109 hp and 141 Nm of torque, carrying it from 0-100 kph a couple of seconds faster than the Rush. Mated to another four-speed automatic utilizes tall gearing that prioritizes fuel economy over acceleration, giving the Xpander a rated fuel economy of 9 km/l in the city, not bad for its weight.

Adopting an FWD layout, the Mitsubishi Xpander 2019 behaves differently than its Toyota rival, with more of the vehicle’s weight concentrated in front. The lack of a transmission tunnel and live rear axle, however, enables it to maximize the rear for space.

The Xpander tips the scales at 1,220 kilos, some 100 more than the Rush, resulting in a considerable amount of understeer when putting it around the bends. The Xpander may harbor no illusions of being sporty, but it does have a more comfortable ride thanks to its front MacPherson struts and rear torsion beam.

WINNER: The Rush counters with its sporty driving dynamics.

Safety is a paramount consideration in modern cars; even entry-level cars now offer safety options than a decade ago can only be found on luxury cars. Both the Mitsubishi Xpander and Toyota Rush feature traction and stability control, Hill Start Assist and anti-lock brakes which are all integral components for high-riding vehicles with considerable weight.

That said, the segment-exclusive six airbags found on the Rush makes it an easy pick for me, compared to the Xpander’s dual front airbags. The fact that Toyota Rush got a five-star safety rating from ASEAN NCAP over the Xpander’s four in ASEAN NCAP crash tests is further icing on the cake.

You can find the pricing details below for both the Toyota Rush and Mitsubishi Xpander.

7. Xpander vs Rush Philippines: The Low Down

So there you have it, folks, the dust has settled from today’s Battle Royale. The Mitsubishi Xpander and Toyota Rush might belong in the same segment, but the difference between them is practically like night and day. While the Xpander is touted as the spiritual successor to the Mitsubishi’s venerable Adventure workhorse, it has been reincarnated as a comfortable family cruiser. Meanwhile, the Rush is marketed as a sporty subcompact in the vein of its bigger Fortuner sibling.

The scores may be tied, but I will have to choose the Toyota Rush. It went all-in on its mini-SUV aspirations, with Rear-Wheel Drive, generous ground clearance and a sporty suspension. It may not offer the same comfortable ride as the Xpander, but it is poised to be an alternative for customers who wish to live the SUV life, but don’t want to break the bank. Rush vs Xpander: Your vote? 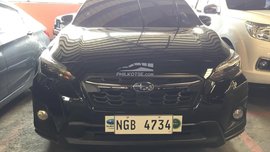