Here’s everything you should know about the Toyota Land Cruiser and the Ford Expedition in a nutshell.

We’re pitting the Expedition and the Land Cruise in an all-out “Auto brawl 101: Ford Expedition vs Toyota Land Cruiser” to know who will prevail in a no-holds barred comparison of these two SUVs.

The SUVs are kings of the road and no there’s no dispute about it. For this auto brawl; the top money options are the ones in the spotlight to see if they deserve to be the top SUV options for a top-money draw.

Both are by-words of what a luxurious top-class SUV is, and other SUV classes are way out of their league. These two examples are what top of the line is; with everything is thrown into that makes them a class above the others. Let’s start of the Expedition vs Land Cruiser by Philkotse.com to see which is truly the best between the east versus the west! 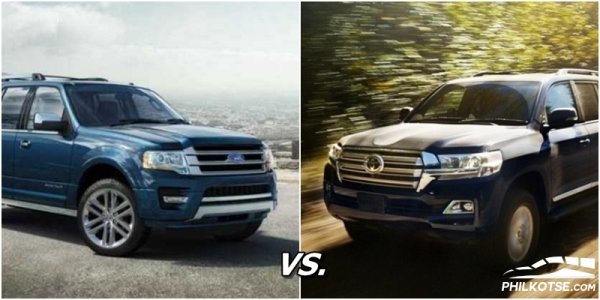 These two examples are what top of the line is; with everything is thrown into that makes them a class above the others

Before getting started, you can learn more about these two giant SUVs in our in-depth reviews:

Size matters and SUV s are made to be big and when occupying loads of space on the road or in a parking space. Size does matter in the “Auto brawl 101: Ford Expedition vs Toyota Land Cruiser”. The length, width, and height make them the biggest and tallest vehicles on the road that dwarfs a compact too.

This is one huge car that outstrips the Land Cruise A smidge smaller; but still a big SUV by all accounts

Both have powerful engines at 3.5 and 4.5-liter ratings, but the Expedition uses turbocharging to make up the difference. Another thing is that the Land Cruiser will eat up more gas than the Expedition. Both have powerful engines at 3.5 and 4.5-liter ratings, but the Expedition (left) uses turbocharging to make up the difference

An SUV is the best option with modern features and a uni-body construction, which is safer than a body on chassis (pick-ups). Both of these two models are in the list of best SUVs in the Philippines in 2018 and safety is a major factor in this Ford Expedition vs Toyota Land Cruiser head-to-head that defines how well an option does. An SUV has added features that help keep it stable. Inside the cabin, more than enough safety features are in place to protect occupants from harm. Other cars would go squish; but the reinforced chassis will leave it a wreck, unlike a smaller car. 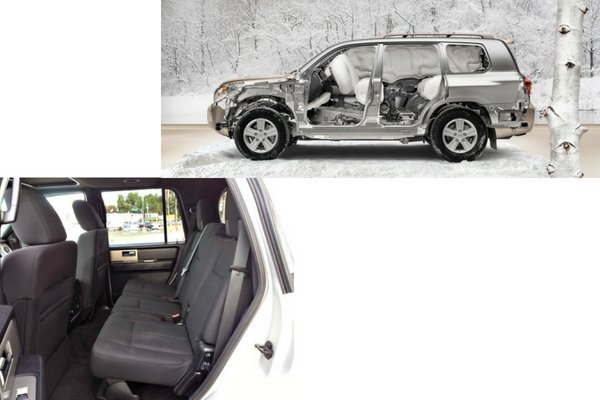 What’s the “Auto brawl 101: Ford Expedition vs Toyota Land Cruiser” without these top money options that are for the moneyed-set with a huge price tag. If modern extras are wanted this has everything for driver and passenger comfort. Forget about the budget because this is the apex of automotive luxury. Using all kinds of aids to keep all the windows clear, including the side view and rear-view mirrors as visual guides. Most cars not in this class will not have these options but are scanty at best. 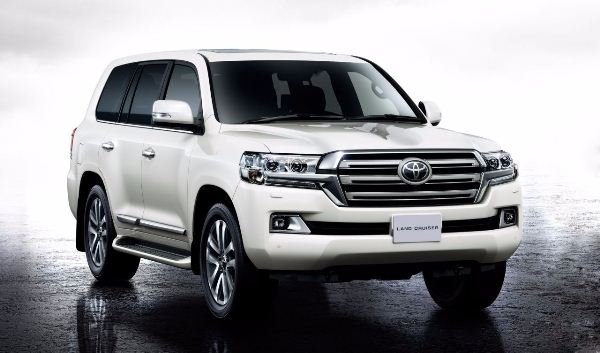 >>> Read more: Ford Expedition 2018 to arrive in the Philippines soon

Who’s the winner in this Ford Expedition vs Toyota Land Cruiser car brawl that has specs in the most relevant features that are practical in all aspects. The overall winner is the Ford Expedition because it has a good price with excellent features, and it can tow 9200 pounds too. The Toyota Land Cruiser is a good option other features like HAS, TACC which are derivative of ESC. Go over these tables and see it is for you.

If you're hunting for best Toyota Land Cruiser and Ford Expedition models, hope that the two list below can be useful for your car search.

Finally, don't forget to visit our Spotlight section if you want to read more "furious" auto brawl 101 on Philkotse.com. 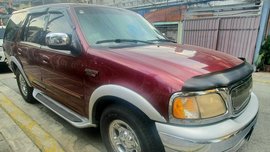