A duel between two seven-seaters from the same brand

As we know quite well, the Toyota Rush’s natural born competitors in the Philippine 7-seater MPV market segment are the Honda BR-V and the Mitsubishi Xpander Cross. These, including the Rush, however are not just some plain old MPV but are somewhat miniature SUVs.

Toyota however, has several other seven-seater MPVs in its lineup. There’s the Innova, which is larger, and then there’s the all-new 2022 Toyota Avanza, which is much closer to the Rush in size. To that end, the Avanza is a fair bit wider than the Rush. The Rush however, is longer and taller from the ground than the latter. The Avanza then comes with a longer wheelbase. For exterior equipment, both models come standard with LED headlamps, LED taillights, front fog lamps, power-folding side mirrors, and roof-mounted rear spoilers. The Rush then comes with roof rails, while the Avanza does not.

Moreover, the Rush uses a set of 17-inch alloy wheels, while the Avanza uses a smaller 16-inch set.

As mentioned, both the Avanza and the Rush can comfortably seat up to seven occupants. Both also come standard with fabric covered seats, a tilt and telescopic steering column, manually adjustable driver’s seats, and rear air-conditioning vents. Other interior features found on both models are a push-to-start button, an analog gauge cluster, 60:40 split-folding seats, among others.

For on-board entertainment, the Avanza meanwhile, gets an eight-inch touchscreen headunit. It has Bluetooth and USB connectivity, but it adds on to those with Apple CarPlay and Android Auto. It is then linked to a four-piece speaker system. Inside the Toyota Rush

Rush meanwhile, gets a smaller seven-inch touchscreen with Bluetooth, USB, and Weblink Smartphone Connectivity software. It has a simpler set of connectivity options, but then it has more speakers numbering at eight.

For engines, the top-spec Avanza G uses a 1.5-liter inline-4 gasoline engine that’s good for 105 horsepower and 138 Nm of torque. The said engine is then paired with a continuously variable transmission sending power to its front wheels.

In turn, the Toyota Rush G uses a 1.5-liter inline-4 gasoline engine that can make up to 102 horsepower and 134 Nm of torque. Power is then sent to its rear wheels via a four-speed automatic gearbox. That said, the Avanza makes a bit more power than the Rush. The difference however, is marginal. Then again, their different drivetrains will certainly mean different handling characteristics.

Furthermore, each model comes with a different rear suspension system. For the Rush, it uses a five-link axle type suspension. The Avanza in turn uses a torsion beam rear end. Both then use a MacPherson strut type suspension for the front.

The Rush also gets disc brakes for all four wheels, whereas only the Avanza’s front wheels are provided with discs. Its rear end then has drum brakes. As a side-note, the new Avanza no longer shares a platform with the Toyota Rush. It now uses the Daihatsu New Global Architecture (DNGA-B), which means that it is now a full-on monocoque model.

Both the Avanza and the Rush are kitted out with what you’d expect from a modern MPV. Both have anti-lock braking, stability control, ISOFIX child seat anchors, speed-sensing door locks, an engine immobilizer, rear parking sensors, a rear camera, hill-start assist, and a security alarm.

The Avanza G however, gets more in the way of safety tech. This is because apart from the aforementioned features, it also has blind-spot detection and rear cross-traffic alert.

Then again, the Toyota Rush has seven airbags, while the Avanza gets a total of six airbags.

As daily drivers that can carry the entire family, both the Rush and the Avanza can do well. Both are also good at swallowing up cargo with the spacious trunks. Do you prefer the look of the Avanza's rear end?

The all-new Avanza however, does offer a bit more in terms of interior features. It has a better infotainment system, and it has more in the way of driver-assist tech. So, if safety is a priority, then you might want to lean toward this model. Or do you prefer the rear of the Rush?

The Rush in turn does have its own charms. For starters, it gets an arguably more robust chassis. Plus, some gravitate more towards its rear-wheel-drive layout. 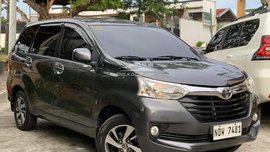