Which 2020 Suzuki Swift variant should you buy? [Comparison Guide]

Want to know for sure which Swift is right for you? Then find out here.

Classified as a subcompact car with a 5-door hatchback body style, the Suzuki Swift is one of Suzuki’s mainstays since the introduction of its first-generation models 20 years ago in 2000.

Now in its fourth-generation, the Swift has evolved into a very attractive hatchback that is built on the Suzuki Heartect platform. In the Philippines, the latest version of the Swift was launched in 2018 with three variants.

So which among these three is the right Suzuki Swift variant for you? Let’s find out.

When it comes to size, all Suzuki Swift variants here in the Philippines are 3,840mm long, 1,735mm wide, and 1,495mm in height. All Swift variants also have the same wheelbase length at 2,450mm, and the same minimum ground clearance of 120mm. In terms of exterior design, the Swift is a very attractive hatchback with a sporty feel to it that greatly reminds us of other more powerful hot hatches.

Note that the Special Edition Swift variants do take the model’s look up a notch with a MINI-like paint scheme, a different looking grille, matte black skirts and carbon decals, and a rear spoiler. All Swift variants, however, come with a hidden rear door latch, blacked-out pillars, and a “floating” roof.

When it comes to what you get inside the Swift, the GL MT and the GL CVT are just about the same. Both have electric power windows for the front and rear, manual air-conditioning, a seven-inch multimedia touchscreen with an auxiliary jack, a USB port, and Bluetooth connectivity, as well as off-line navigation. 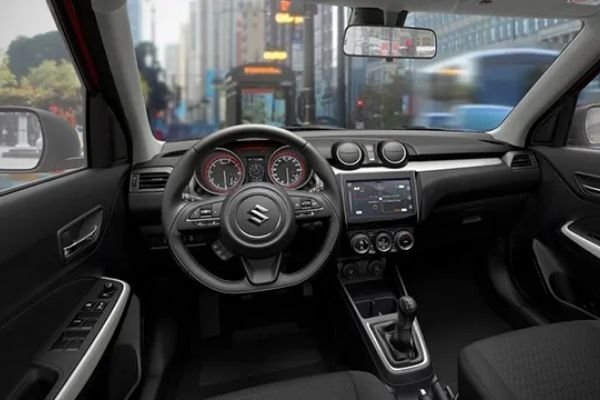 The interior of the Swift isn't much, but it's well arranged and comfortable

For the Swift’s interior amenities, there’s the usual urethane, three-spoke steering wheel with tilt-adjust and audio controls, an analog speedometer and tachometer, an information display with a clock and fuel consumption meter, a door ajar reminder, dual sun visors with a vanity mirror for the passenger side, and a center console tray.

Suzuki Swift 2020 also has a good number of storage space and storage pockets as well as a good amount of bottle holders and cup holders. All variants of the Swift are equipped with 60:40 split type rear seats and all seats are clad in fabric.

With the rear seats down, the cargo space stretches up to 546 liters. With all the seats in use, the default cargo space shrinks down to 242 liters, which is good enough for the usual grocery run and daily commute. 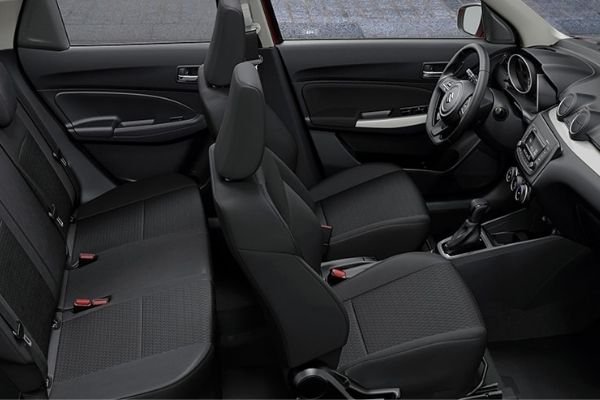 In terms of engines, all the Suzuki Swift variants are powered by the K12M, a naturally aspirated inline-4 gasoline engine with a 1,197 cc displacement.

On both the CVT and MT Swift variants, it makes a maximum of 82 horsepower at 6,000 rpm and 113 Nm of torque at 4,200 rpm. The said engine sends power to the front through a five-speed manual or a continuously variable transmission. 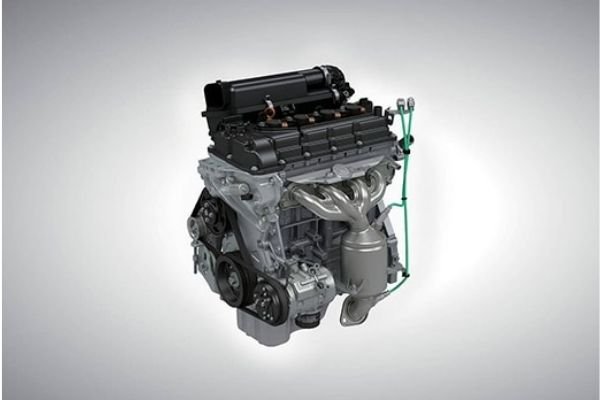 The K12M isn't that strong but it sure is efficient

In terms of safety, the Suzuki Swift comes with all the things one would expect from a modern, affordable hatchback. It’s equipped with dual front airbags, childproof rear door locks, ISOFIX, seatbelts for all five passengers, an anti-lock brake system, high-mount LED stop lamp, and a brake assist function. For security, all Swift variants also have an engine immobilizer and a security alarm.

Also note that with the fourth generation Swift, Suzuki managed to fix the rear visibility issue.

As you can see now with our variant comparison above, there are only several major differences between the Swift variants. There are the transmission options and the position and number of 12V sockets as well as the aesthetic upgrades on the Special Edition.

So when it boils down to it, you’ll want to get the CVT if you have a larger budget and/or if you want a more relaxed drive in the city. If you want to enjoy the agility and responsiveness of the Swift, then we recommend getting the five-speed manual. And yes, the Swift is inherently a well sculpted car that's very easy on the eyes

>>> Related: 2021 Suzuki Swift: Expectations and what we know so far

And lastly, if you want to look great (or stand out more) regardless of whether you’re driving in the city or on a highway, then you’ll want the Special Edition variants.

Either way, the Swift is a no-nonsense vehicle that handles great, is fuel-efficient, and most importantly, is very affordable. As such, all of its variants are ideal for a person who lives and works in the city. Heck, it can even serve as a family car for those with small children.

For more buyer’s guides like this, keep reading here on Philkotse.com. We’ve got more to come.