Updated Sep 17, 2019
Editor's rating 3.0
User's rating 3.8
Look through our Suzuki Swift Sport 2018 review to have an idea of what the latest version of this hot hatch has to offer!

​The Suzuki Swift Sport 2018 made its official debut in September 2017 at the Frankfurt Motor Show, one of the world’s biggest annual car events. Not only getting refreshed with a more aggressive look, the all-new hot hatch is also driven by a more powerful turbocharged four-cylinder engine and features a handful of improved technologies.

Let’s get a better insight into this sporty hatchback through our Suzuki Swift Sport 2018 Review to see why the Suzuki Swift Sport has been successfully keeping its crown as one of the best affordable performance vehicles in its segment. As its name suggests, the Swift Sport 2018 has a sportier style than its predecessors thanks to a host of changes in its exterior.

Starting with the front fascia, it is noticeable that the Swift Sport features a much bigger grille with a new mesh design, allowing more air for engine cooling down and giving the car a more dynamic appearance than the non-Sport counterparts. The Swift Sport 2018 comes equipped with new side skirts and upgraded roof-mounted spoiler, not to mention a set of thin-spoke 17-inch alloy wheels and bigger twin exhaust pipes. The makeover is further enhanced with rear door handles hidden in the C pillar, which makes the sporty hatchback look more like a coupe. Another noticeable update lies in its overall dimension. The new Swift Sport is lengthened by 20mm, widened by 40mm (at both the front and rear) and lowered by 15mm in comparison with its predecessors. To compensate for the reduction in height, Suzuki has added a firmer suspension to the hatchback to minimize body roll while driving.

With all these changes in dimension, it comes as no surprise that the Swift Sport now weighs just 970kg, 80 kg lighter than its second generation sibling. Beyond the entire aforementioned refresh, Mr. Masao Kobori - the Suzuki Swift’s Chief Engineer stressed: “It’s more aggressive and emotive, but we’ve also refined the elements that make it practical to use every day”.

In other words, the Suzuki representative would like to demonstrate the carmaker’s strong focus on the driver’s experience during the development of this all-new hatchback. The sporty style continues to dominate the Suzuki Swift Sport 2018 interior. It is hard not to notice the red trim and red contrast stitching running throughout the cabin, which makes the vehicle distinguish itself from a standard Swift. The dashboard also gets a minor update with a new oil temperature gauge and turbo boost. Both a D-shaped steering wheel and sporty semi-bucket seats come as standard in the Swift Sport. Finishing the interesting interior updates of the all-new sporty hatch are a shift knob made of chrome and aluminum-effect pedals. The red trim and red contrast stitching running throughout the cabin As can be seen from the images, at the center of the instrument panel is a new 7-inch touchscreen that is compatible with Apple CarPlay, 3D-map navigation, MirrorLink and Android Auto. The infotainment system can also be connected to smartphone via Bluetooth.

The new Swift Sport also loaded with cruise control, air condition, voice command, and USB connectivity. It is likely that the new hatch will be installed with multiple driving modes to easily adapt with different road conditions. 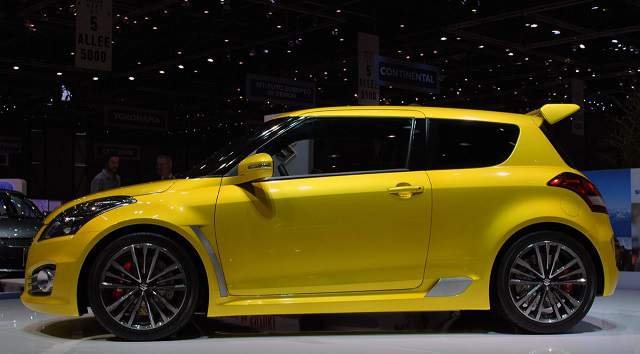 The third-gen Swift Sport is empowered by a turbocharged 1.4-litre BOOSTERJET petrol engine, mated to a 6-speed manual transmission. The car now allows a maximum power output of 140 hp and 230 Nm of torque, meaning an increase of 4hp and 70 Nm compared to the last model. The third-gen Swift Sport is empowered by a turbocharged 1.4-litre BOOSTERJET petrol engine

According to expert car reviews, even though the enhancement seems minor, it actually brings significant improvement to the vehicle’s performance. The new Sport is capable of reaching 0-62mph in less than 8 seconds while still retains decent fuel consumption thanks to its decrease in weight (from 1,050kg to only 980 kg, as mentioned above). It is not difficult to recognize that the front axle of the car now receives thicker stabilizers bars to achieve greater roll stability. Toe rigidity is increased by 1.4 times while camper rigidity is improved by 15% thanks to a set of high-performance Monroe shock absorbers at both the front and rear of the vehicle. A specifically-designed trailing arm is also added to the rear suspension so as to reduce deformation caused by cornering forces.

According to Mr. Masao Kobori, the core development concept of the Sport 2018 is “Ultimate driving excitement” as the brand thoroughly understands that dynamic driving experience is always a top priority of its customers. He also implied the new Swift Sport as a “genius hot hatch” and even expressed his definite belief by insisting: "I’m confident that when you drive it you’re going to go WOW!”. The price of the all-new Swift Sport is predicted to be somewhere around £13,999

The 4th-gen Suzuki Swift 2017 was already launched last March at Geneva Motor Show and currently available to order in Europe. However, European car enthusiasts will have to wait until early next year for the Sport model. And for the arrival of the hot hatch to ASEAN market, there has yet to be any official announcement from the Japanese carmaker.

While patiently waiting for the genius hatch to come to our shores, let’s check out the price tags for the regular Suzuki Swift in the Philippine market today:

We hope that this Suzuki Swift Sport 2018 Review on Philkotse.com has given you just enough reasons to fall in love with this small yet powerful vehicle.